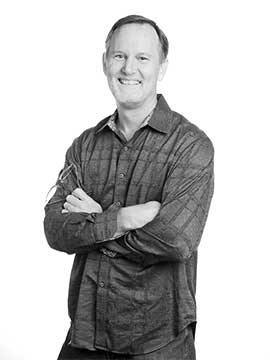 
Mark E. Boyer joined the faculty and administration at LSU as Robert Reich Professor and director of the LSU Robert Reich School of Landscape Architecture in 2015. Boyer received his BS in landscape architecture with distinction from the University of Kentucky after serving four years in the United States Air Force. He followed two years of professional practice with an MLA at LSU. As a registered landscape architect in Louisiana and Arkansas, Boyer has worked as a landscape architect at Patrick C. Moore Landscape Architects + Site Planners (now Environmental Resources Management) in Alexandria, Louisiana, where he was involved in institutional site design, master planning, and large-scale state and national parks. He joined the faculty at the University of Arkansas in 1998 and has taught courses on landscape architecture construction materials and technologies, ecological design studios, and interdisciplinary courses on urban stormwater management and constructed wetlands. He has won several teaching awards at the departmental and national level and was inducted into the highly distinguished University of Arkansas Teaching Academy.

Boyer has received numerous grants for his research on landscape architecture design and construction technologies; sustainable design; green roofs and bio-retention; and sustainable and alternative stormwater management technologies. He has presented papers at national and international conferences and his work has been published in dozens of peer-reviewed publications. Boyer received bevies of merit and honor awards from the national and regional organizations of the American Society of Landscape Architects (ASLA), the American Institute of Architects, and others for the planning and design of an urban greenway in Warren, Arkansas, and as a project design team member of “Habitat Trails: from infill house to green neighborhood design.”

His extensive involvement in landscape architecture professional organizations includes serving for two years as second vice president of the Council of Educators of Landscape Architecture (2012–14), an elected position. A member of ASLA, he served on the Committee for Education (2012–14). He has volunteered for the Task Analysis Experts Committee and the Cut Score Committee of the Council of Landscape Architectural Registration Boards (CLARB), the organization that certifies landscape architecture professionals and establishes and promotes standards for professional competency and conduct.