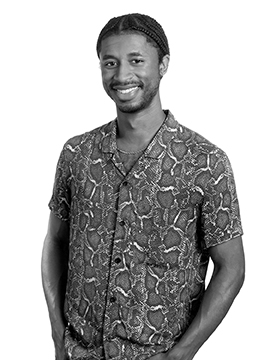 
Wesley Chavis (b.1992) is an interdisciplinary artist and vocalist from Beaumont, Texas and based in New Orleans, Louisiana. Chavis’ work reimagines personal and communal moments of spiritual awakening through sensuous processes of conciliation between dissonant objects, people, and pictures. Across his interdisciplinary practice, he questions the multi-dimensionality of blackness by invoking his imagination of an after-life, filled with the simplicities and paradoxes of an earthly existence. Chavis has been featured in exhibitions at Present Company (Brooklyn, NY), NXTHVN (New Haven, CT), Wexner Center (Columbus, OH), and has performed at venues including The Gibney (New York, NY), Socrates Sculpture Park (Queens, NY), and Good Children Gallery (New Orleans, LA). Also, Chavis has been reviewed in publications such as Art in America and The New Yorker. He received his BA from Yale University, his MFA from Virginia Commonwealth University, and attended the Skowhegan School of Painting and Sculpture in 2017.