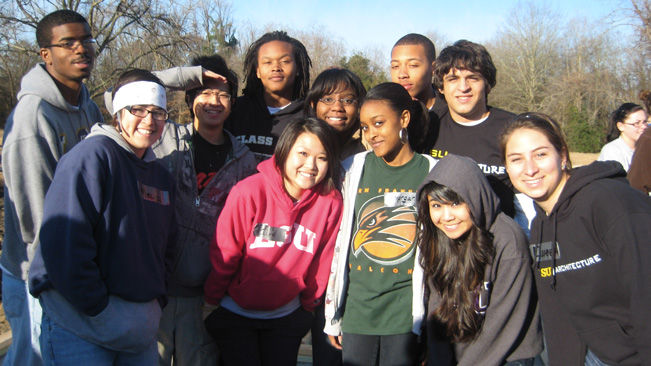 The National Organization of Minority Architects NOMA has named the student chapter in the LSU School of Architecture as 2010 Student Chapter of the Year.

The LSU chapter received the award, which was announced last week at the NOMA annual conference in Boston, Mass., because of its impressive growth and diversity, and commitment to community service. The NOMA board was also impressed with a high school mentorship program the student chapter developed and hosts on campus each spring.

“Each and every year these students amaze me with their drive to exceed the goals of the previous year,” says Dana Mitchell, advisor to the LSU chapter. “They are an awesome group and the best is yet to come for them.”

The LSU NOMAS Chapter had just five charter members when it was formed in 2005 to address the needs of minority students in the architecture program. Today, it has 23 members, including President Elizabeth Galan, a third‐year student in the School.

The chapter is very active in promoting its mission, which is to “enhance our education, network with professionals, and begin to define solutions, which will insure a productive working environment for the School of Architecture and the total community. We hope to build our knowledge and expertise, and join hands with other organizations to prepare to address problems confronting our communities.”

NOMA is a national organization dedicated to the development and advancement of minority architects. Founded 1971, it has an increasing influential voice, promoting the quality and excellence of minority design professionals. There are NOMA Chapters in all parts of the country, increasing recognition on colleges and university campuses and providing greater access to government policy makers.

“We are incredibly proud of our NOMAS chapter,” says Jori Erdman, director of the School of Architecture at LSU. “They are a small but dedicated group of students that have demonstrated their talent, ambition, and integrity over the years.”