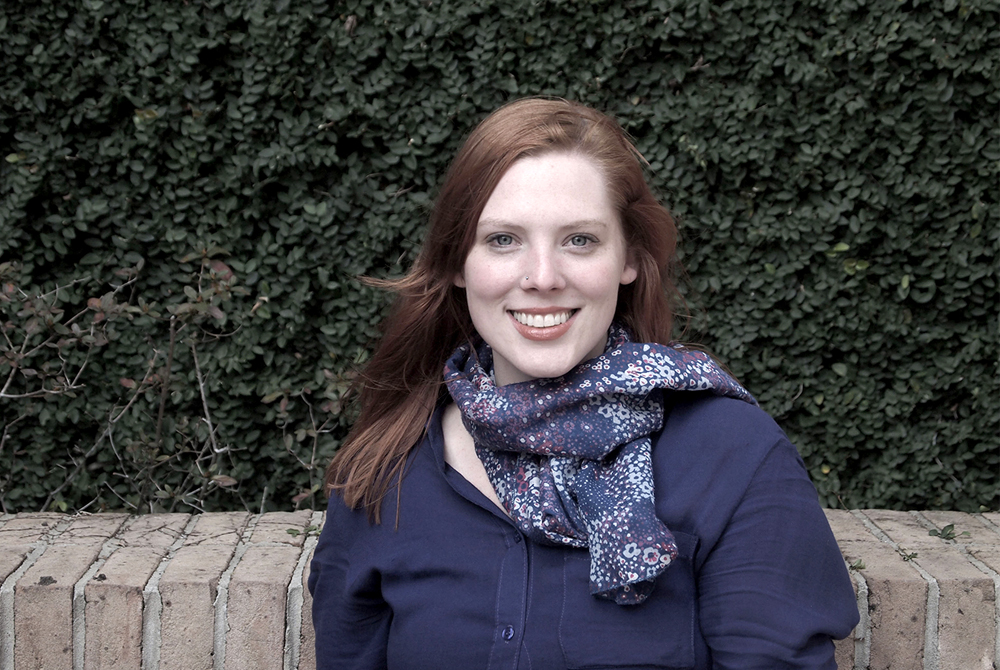 Most people wouldn’t make an immediate connection between theater and landscape architecture. But to Sheryl Fishel, a third-year graduate student at the LSU Robert Reich School of Landscape Architecture, the transition makes perfect sense.

“In theater, you are creating an environment based on your own vision—designing what you want other people to see, feel, and experience. All aspects of a theater production are controlled and fabricated to achieve the creative vision,” explained Sheryl. “In landscape architecture, the situation is different. Designs need to be flexible to accommodate for two influences that cannot be controlled: time and people.”

A native of Pennsylvania, Sheryl received a BS in Theatre Arts Management from Ithaca College in New York. After graduation she worked at the 1,600-seat State Theatre of Ithaca, where she managed more than 100 volunteers—at 22 years old! While she enjoyed her time there, she realized she wanted to have a career outside the performing arts that allowed for greater professional and personal development.

“I wanted a ‘forever’ career—where I could continue growing intellectually and professionally over the course of my life,” she reflected.

Hoping to remain in Ithaca, she worked as a wedding planner and customer service manager for a local, successful day spa. The position offered opportunities for growth, and the owners encouraged Sheryl to continue expanding the event planning department. In her first season, she increased profits in the department by more than 20 percent—during a recession! Today, Sheryl considers the owners and staff influential for guiding her towards a career path as a landscape architect.

“I am always seeking a new challenge, trying to find the next idea to harness and run with,” she said.

Sheryl has been a gardener her whole life. “From the time I was six or seven years old, gardening was how my family spent time together.” They grew vegetables, planted flowers, visited nurseries, and spent many weekends outside. She has always recalled that time fondly, but she didn’t think about incorporating her hobby into her career until she discovered landscape architecture through her volunteer work with Cornell University’s horticulture department, assisting a research scientist in testing cultivars and varieties of plants in controlled settings. She was excited to realize that she could combine 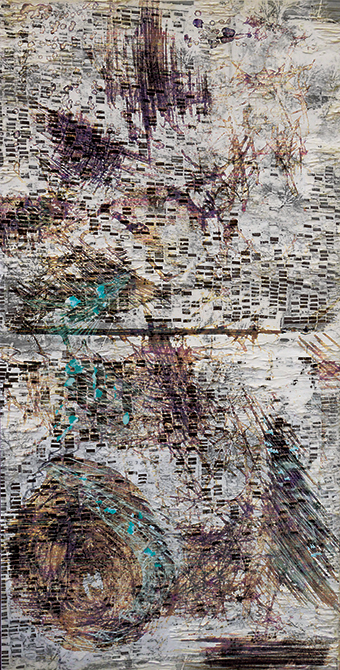 her passion for gardening and plants with a profession that transforms, creates, and helps sustain communities.

Having taken out student loans while acquiring her undergraduate degree in theater management, Sheryl was conscious of the cost entailed in pursuing a Master in Landscape Architecture, from tuition expenses to lost earnings while taking time out of the job market. One component of her plan to reduce these costs involved attending LSU, where tuition is significantly lower compared to other MLA programs, especially other highly ranked programs. In 2015, LSU’s MLA program was ranked fifth in the nation by DesignIntelligence magazine. The rest of Sheryl’s plan involved applying for scholarships and graduate assistantships and working part-time during the school year.

Each university may only nominate one student from each of its LAAB-accredited landscape architecture programs. The nominated students are recognized as University Olmsted Scholars and compete for the national award. Nominees are required to submit a personal essay describing their role in advancing sustainable planning and design and their plans for using the funds. The awards are meant to help the student put the project in motion and begin the research described in the essay.

Sheryl’s project focused on her community, the state of Louisiana. “The most interesting projects are the ones in which I have an investment. As community members, I believe we are responsible for making informed decisions to better our neighborhood,” she said. “While traveling is an important component for growing as a landscape architect, ultimately, we should apply what we learn to improve the community where we live.”

Sheryl’s proposal addressed remediating hydrologic systems and understanding its impacts on regional and global landscapes. More specifically, rethinking stormwater lots in New Orleans. She was particularly interested in the concept of using abandoned lots to retain stormwater. While she wasn’t selected by the jury for the $25,000 prize, Sheryl is proud to represent the LSU MLA program as a University Olmsted Scholar, and she attended the American Society of Landscape Architects conference where she met with the other 2015 University Olmsted Scholars.

Since arriving at LSU, Sheryl has also applied for and won the 2014 Hazel Dillingham National Garden Club Scholarship, and she has received additional support from LSU Landscape Architecture Endowment Fund.

“I am thankful for the support of the Louisiana Garden Club and the LSU Robert Reich School of Landscape Architecture faculty and alumni. While applying for scholarships is a significant investment of time with no assurance of success, the effort spent gathering materials and developing projects has benefits beyond the potential monetary award,” Sheryl explained. “The application process is an opportunity to reflect on design ideas and has provided me with avenues to interact with the public, project juries, and colleagues in the field. And, of course, winning scholarships has been very useful in defraying the cost of pursuing an MLA. Scholarships open opportunities for the types of projects you will be able to work on in the future, even after graduation.”

As a graduate assistant at LSU, Sheryl has worked in the landscape architecture office and in CADGIS, the Computer-Aided Design and Geographic Information Systems lab. She also held an assistantship with the LSU Coastal Sustainability Studio (CSS), a transdisciplinary program of the College of Art & Design, College of Engineering, and the School of the Coast & Environment, where scientists, engineers, and designers come together to intensively study and respond to issues of settlement, coastal restoration, flood protection, and the economy. Sheryl’s work in CSS included creating visualizations for the Coastal Protection and Restoration Authority.

Now in her third and final year of the MLA program, Sheryl is concentrating on her final project, which she began in Associate Professor Cathy Marshall’s advanced drawing seminar. Work from this seminar was featured in the Design Building Atrium and in the Landscape Relationships exhibition at the LSU Foster Gallery during the 2015 spring semester. Expanding on her exploration of Sweet Olive Cemetery in Baton Rouge, the first African American cemetery in the city, founded in 1850, she is investigating how cemeteries can evolve and progress with communities. 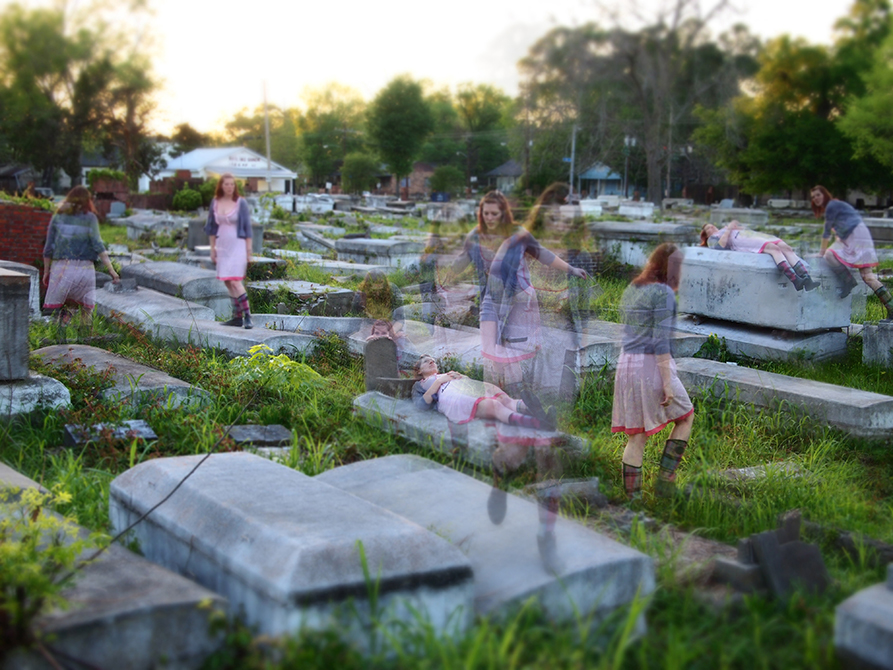 Relaxing with the Dead, Time Lapse Photography, 2014, by Sheryl Fishel

Working in the cemetery has its challenges. “People in the community are curious by my frequent presence there. Sweet Olive has its own unique water issues, so I’ve been spotted standing in water up to my knees, wrestling with my measuring tape and camera equipment. I’ve also encountered some unfriendly free-range dogs while doing field work!”

After graduation, Sheryl looks forward to working for an organization that incorporates community, cultural aspects, and social design in their work. Although she is from the Northeast and loves Louisiana, she is open to moving to a new place for job opportunities.

Her advice for students interested in studying landscape architecture is to get out of town and experiment with a variety of opportunities. “By leaving a familiar place and moving somewhere new, you learn as much about the new place as the place you came from.”

Sheryl admitted to a bit of a learning curve coming from a theater background and entering a graduate program in landscape architecture, especially regarding some of the required technical skills, but she has never been alone. Her classmates come from a variety of backgrounds, including graphic design, marketing, engineering, and geology. English is the second language for almost half of the current graduate students at RRSLA.

Sheryl said she enjoys discussing design problems with such a diverse group of people. “Coming here showed me various methods for approaching projects and the similarities of landscape architects. We may approach a problem individually, but we are working toward the same goal. I admire my colleagues and professionals in landscape architecture. In my time at LSU, I realized we all have varying skillsets, but at the end of the day, we can all sell a design with a pencil and a napkin,” she laughed.