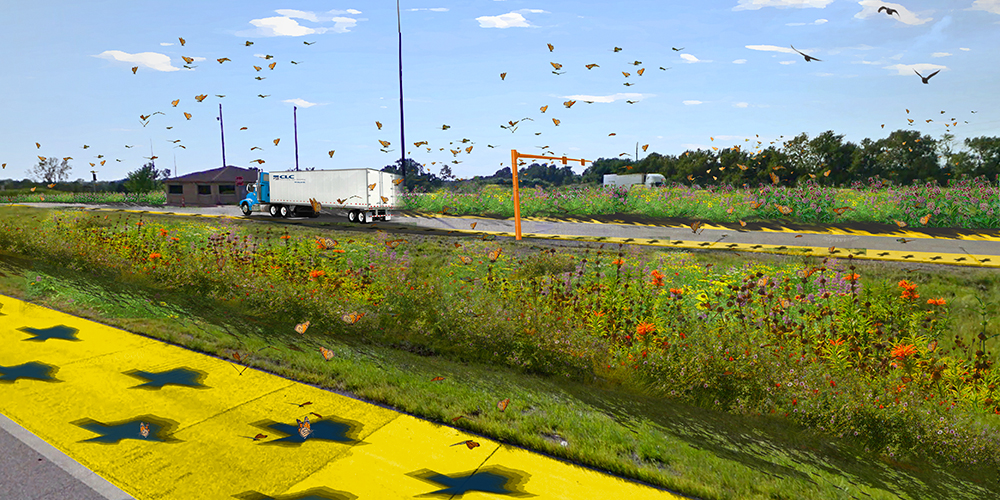 Student Michael McGill’s project focused on how weigh stations along the I-35 corridor could be used to attract monarch butterflies. His rendering of a weigh station in Texas includes places for the butterflies to “puddle” and plenty of space to grow milkweed.

In some cases, highways can work for rather than against wildlife, especially when a thoroughfare extends along an endangered pollinator’s migratory route.

In 2015, President Obama established the Pollinator Health Task Force to address imperiled pollinators critical to the nation’s economy, food security, and environmental health, such as birds, bats, honey bees, and—butterflies. Part of the task force’s National Strategy to Promote the Health of Honey Bees and Other Pollinators is to create a “Pollinator Highway” along the 1,500 miles of Interstate 35, a federal highway extending from Duluth, Minnesota, to Laredo, Texas. The I-35 corridor closely coincides with one of the migratory paths of the Monarch butterfly, a species whose numbers have dropped by nearly a billion in the past 25 years, according to the U.S. Fish & Wildlife Service. 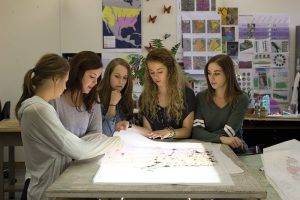 To help students understand the GIS overlays, Steiner took a step back from digital to analog. The students went “old school” and used a light table to view their overlays.

Each year Monarchs set out on a multi-generational, 2,000 mile journey from Minnesota to Mexico. Along the way they battle pesticides, predators, and disappearing habitats in their efforts to eat, grow, and mate their way to warmer weather. Roadways and adjacent infrastructure provide the perfect butterfly habitat—low vegetation, lots of sun, and government-owned right-of-ways. For example, 100 miles on either side of I-35 is federally covered in the Pollinator Highway project, creating the potential to restore 200,000 acres of Monarch habitat! And who better than landscape architects to plan large-scale habitat mitigation along a massive transportation corridor? 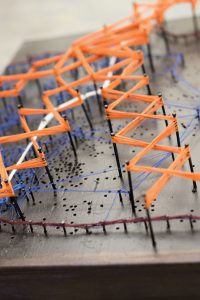 In spring 2016 second-year Bachelor of Landscape Architecture students in Assistant Professor Halina Steiner’s studio explored landscape interventions that could be implemented along the I-35 corridor to save the Monarch butterfly.

“For these second-year undergraduates, this is the first studio where research informs design,” said Steiner. “They needed to understand the systems that affected the corridor and determine what elements of those systems could be reimagined for butterfly and pollinator habitat while maintaining their original functionality and layering on the temperature changes, migration routes, and plant seasonality for each unique site along the corridor.”

It is also their first foray into GIS (geographical information system) mapping. Analyzing the data for a project of this scale—the entire I-35 corridor—is an enormous undertaking. GIS provides a method for capturing, storing, manipulating, analyzing, managing, and presenting all types of spatial or geographical data. In the case of Monarch butterflies, the GIS results showed how different systems, such as temperature, topography, hydrology, infrastructure, ecoregions, park space, and population density, overlap and come together over the corridor. After identifying the big takeaways, the students wrote mini 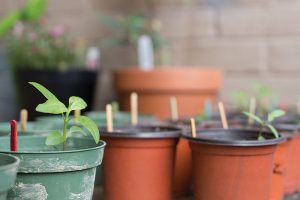 The class tried growing several varieties of milkweed on their studio balcony.

research papers and designed double-page spreads on specific aspects of Monarch life—from metamorphosis, feeding and mating habits, and different species of milkweed to migration, lifespan, predators, and other threats.

Each student was assigned a system that could be used to attract the Monarchs and encourage the butterflies’ presence along the corridor. Students explored a variety of options, such as roadways and clover leaf intersections, weigh stations and visitors’ centers, existing streetscapes and parking lots, prisons, military bases, and other government-owned lands. For the final project, the students designed mini master plans exploring their specific system of interest. As a whole, their work identified available assets, potential test sites, and campaign strategies to help get the “Monarch Motorway” rolling.