“Most of my designs tell a story,” says Dominique Giordano (BFA 1992), New Orleans-based jewelry designer. “This story creates a connection with my customer. These connections become memories. I’m all about a memory.” 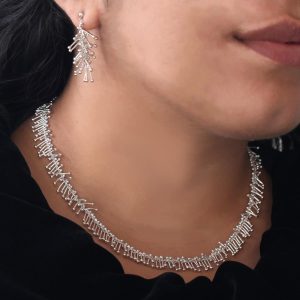 Dominique has run a successful jewelry store on Magazine Street in New Orleans for 20 years. She has received national recognition as a jeweler and has been represented in two metalsmithing books, several publications and in numerous local and national art and craft exhibitions. Her unique Feather Chain design, which she designed in 1987 in her second semester at LSU, has received the Boston Museum of Fine Arts “Director’s Choice Award” (2002).

She has been named “Best Jewelry Designer” by The Gambit (2001) and “Best New Designer” by Fashion Group International (1999). She was selected to sell her jewelry for 13 years in the Contemporary Craft Section of the New Orleans Jazz and Heritage Festival. She has designed and produced pieces in high quantity for many organizations including the Washington Mardi Gras Ball in Washington, D.C. and Mardi Gras krewe Hermes.

“I’m very blessed to have been successful in something I am passionate about,” she says. “What I do and who I am are one in the same.”

After graduating with a major in graphic design with a minor in jewelry/metalsmithing from the LSU School of Art, Dominique began designing jewelry collections, which she premiered at private holiday home shows. In 1996, due to the enormous success of these shows, Dominique opened a shop in the busy arts and retail corridor of Magazine Street. While maintaining this successful outlet, she sold her pieces to over 30 galleries nationwide and in Canada. 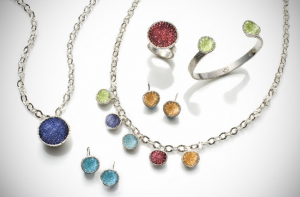 “A friend recently told me, ‘Dom, you’re not in the jewelry business, you’re in the relationship business.’ Yes, I am. I’m all about human connection. I’m proud of my work and when the design or the story behind it connects with someone, I’m reminded that we all have something in common or sometimes go through similar things. It’s comforting.”

Dominique was introduced to the LSU School of Art through her sister Cydney. “It was her friend who told me about graphic design. He knew I liked art and advised me that if I wanted to do art and make a living, that I should look into graphic design at LSU,” she says. “It was my sister who first took a jewelry/metalsmithing class as an elective at LSU, which introduced me to medium. She would bring home the pieces she created in Chris Hentz’s metalsmithing class and I was just amazed at how she created something so beautiful out of such a hard dense material.”

“I still use all of the skills I learned during my time at LSU, but the best job I had was working for my metals instructor, Chris Hentz, and his wife, enamellist Barbara Minor. I loved working with metal and took as many classes I could. Working with them was a gift. I was already being taught how to anneal, cast, raise, and manipulate the metal into a piece of wearable art. In the classroom, I created one-of-a-kind pieces.”

“The gift came in the opportunity to go beyond the classroom and into their studio… into the real world,” she said. “In their studio, I learned production. They brought me to wholesale markets in Baltimore, MD and Philadelphia, PA and showed me how to talk about the craft and to sell. I met other talented artists at these shows and heard their stories and this gave me a sense of reality that I could one day make a living at something I truly love.”

Dominique was a talented and dedicated student from the beginning, said Chris Hentz, LSU professor of metalworking, who is now retired from teaching. “I remember as a student Dominique came to her first trade show at the convention center and saw professional jewelry makers and craftsmen, and it made such an impression on her,” he shared. “She said, ‘everyone is perfect’ – what she aspired to be.”

We all work an infinite amount of hours at our ‘job.’ What I did not expect was the absolute joy that I receive from my profession choice. Designing, creating, problem-solving, communicating and working with the customer, telling a story through a design, making it as pleasing to the eye as well as to the touch, paying the most attention to detail, having each piece look as “beautiful on the back as it does on the front” (thank you Chris Hentz), are just some of the many facets of my job.”

“The blessing really comes in the fact that I don’t see what I do as a “job” but actually what I do is a part of who I am. I am a mother, wife, friend, metalsmith, designer, inventor, creator, and communicator. Just standing in the middle of my studio brings be great joy!”

Dominique has had designed many pieces with personal meaning to her. She was asked to design a piece for American Cancer Society’s Relay for Life. “I was very excited about this design opportunity to create a touchstone. My sister-in-law, Jill, had lost her battle with breast cancer a few years before at the young age of 32. Usually, design ideas come to me when the customer is talking about the concept, sentimentality, or materials they want used in their piece. [But with this piece] for weeks, nothing came to me.”

Watch the video of Dominique explaining her Superstars concept.

More recently, she has had the opportunity to design and create Mardi Gras krewe favors. In 2017, she created three designs for the Washington Mardi Gras Ball in Washington, D.C., totaling 725 pieces. She designed and produced the Krewe favors for the Olympians in 2018 (350 pieces) and 2019 (275 pieces). They sold out each year. She also designed and produced 425 krewe favors for Hermes, one of the oldest and largest organizations in New Orleans.  Hermes was especially challenging, as the theme was ‘Louis XIV court music.’

“I enjoyed researching the sun king, and created a design that was symbolic. The lace represents the court fashion, the collage of sheet music was from Jean Baptist Lully, the kings composer during his reign, and a faceted blue stone which represents the French Blue diamond owned by Louis XIV, stolen during the French Revolution, and discovered 20 years later, re-cut into what is now known as the Hope Diamond.” 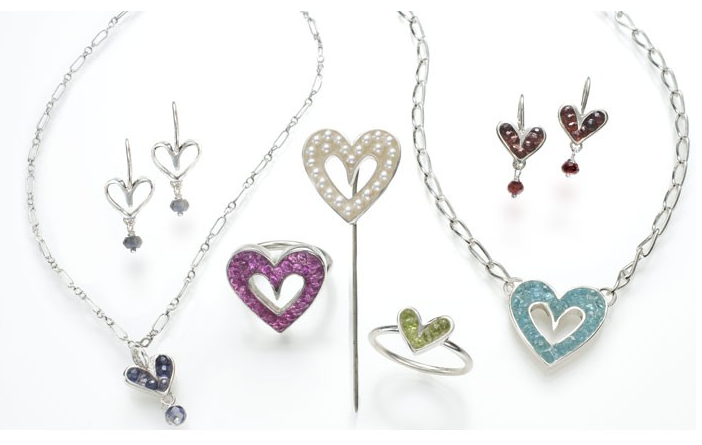 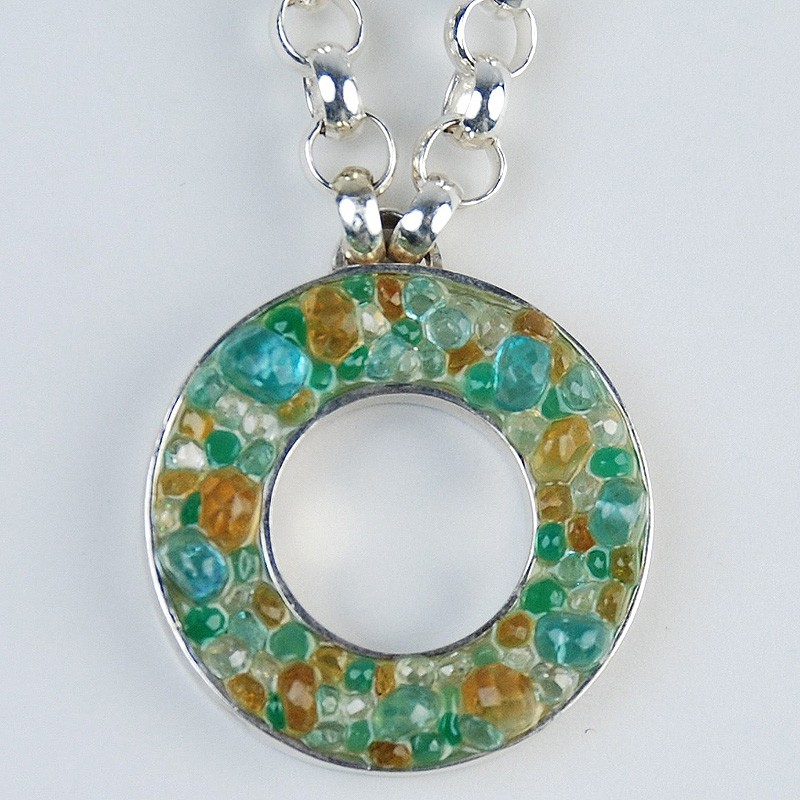 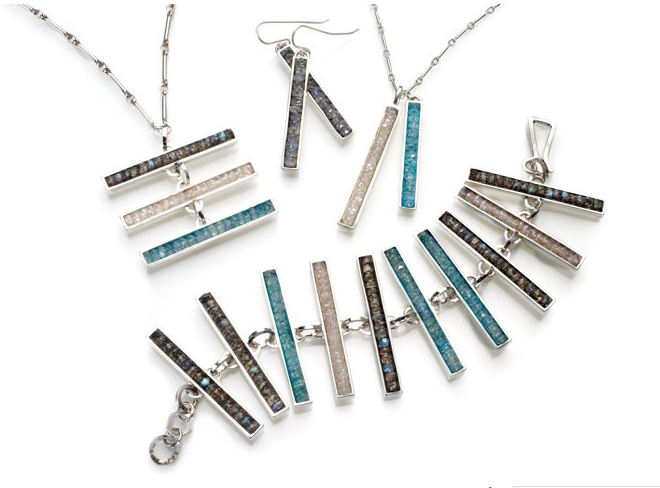 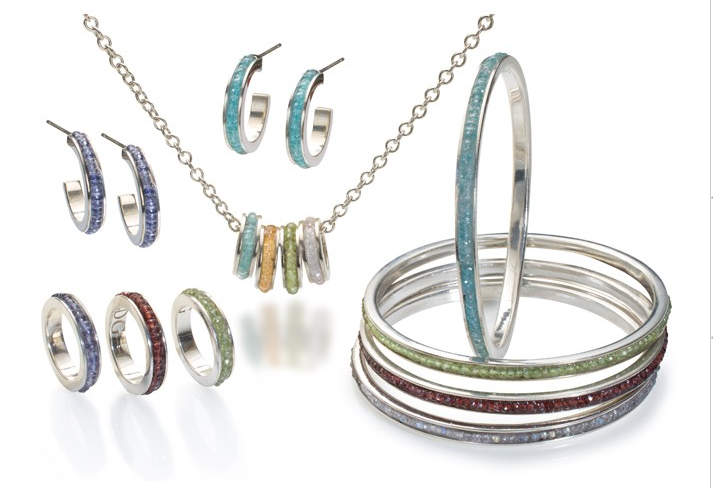 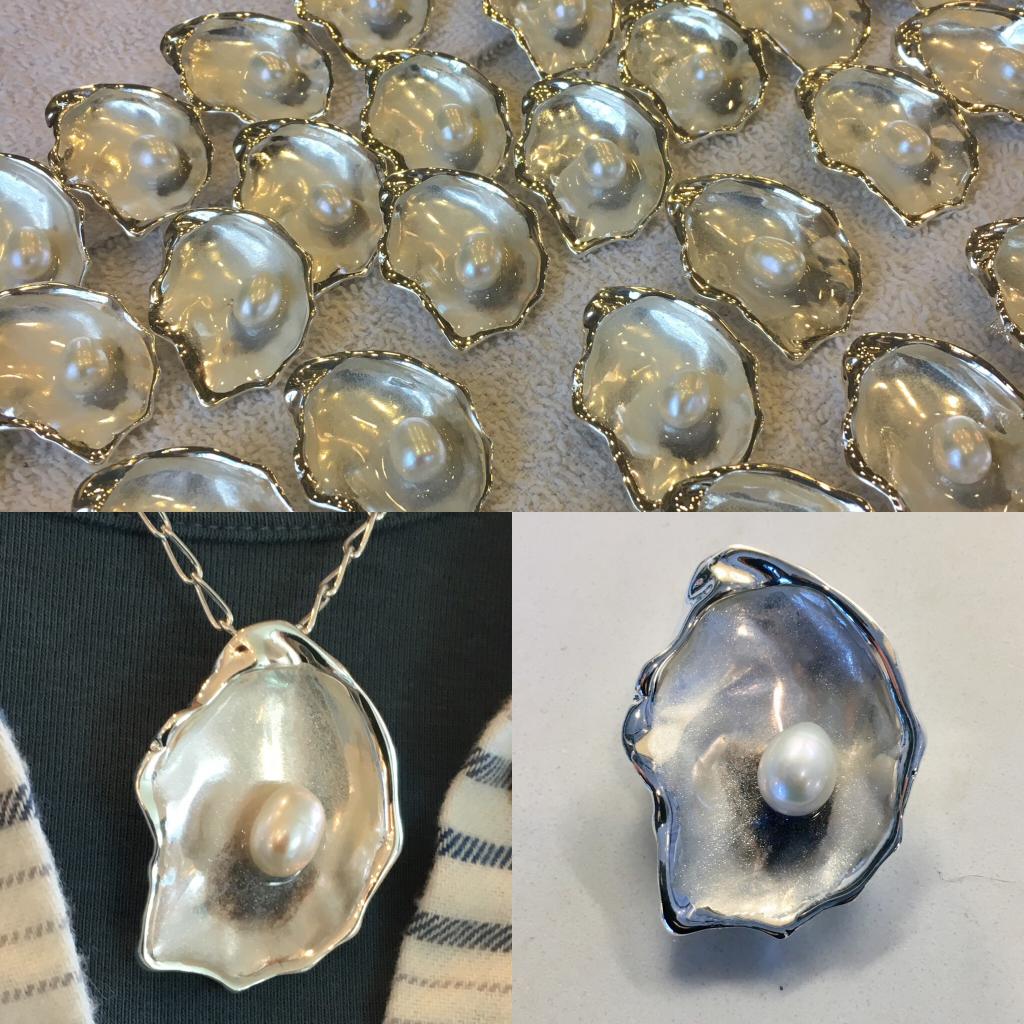 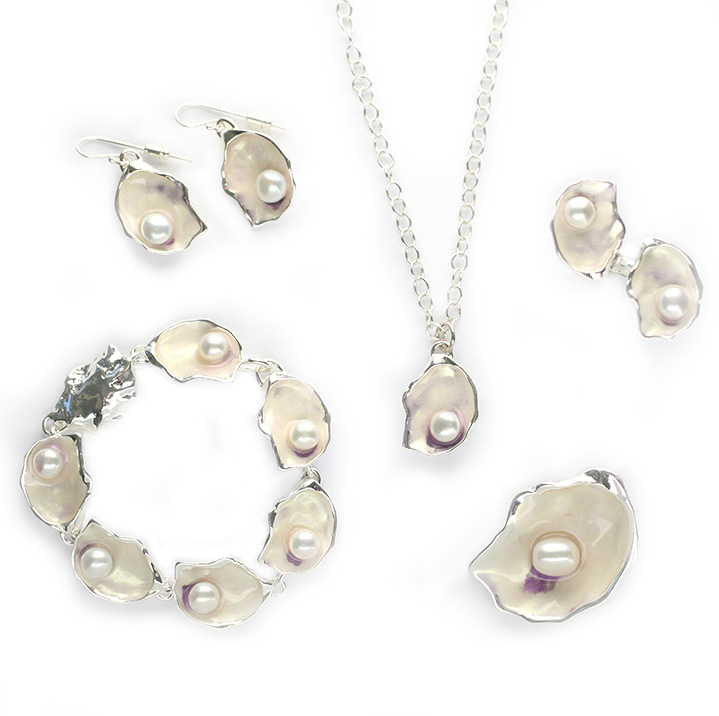 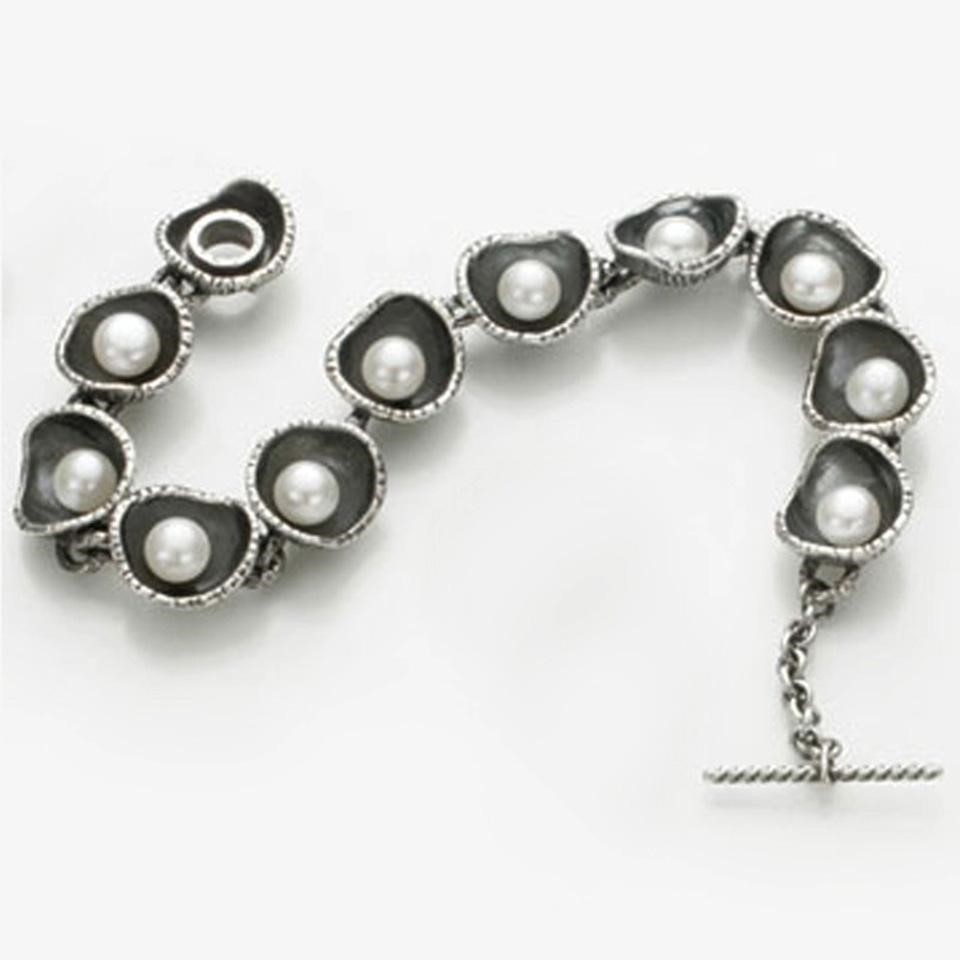 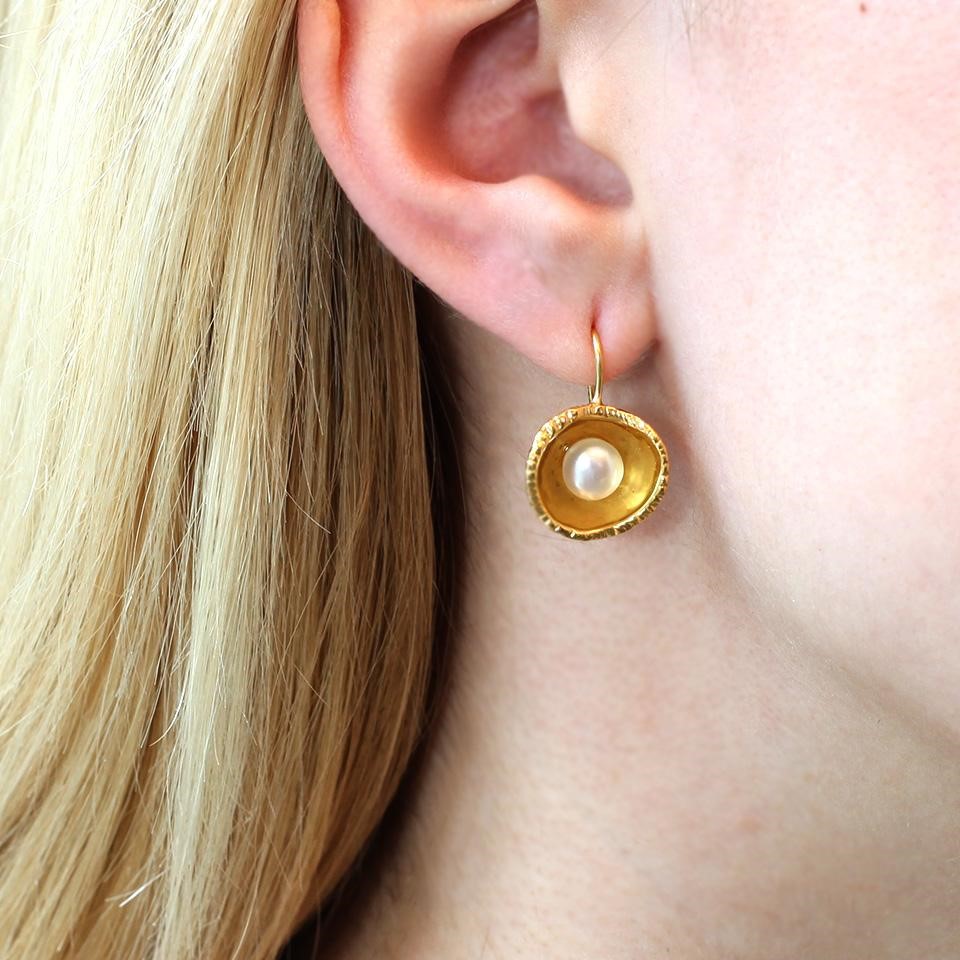 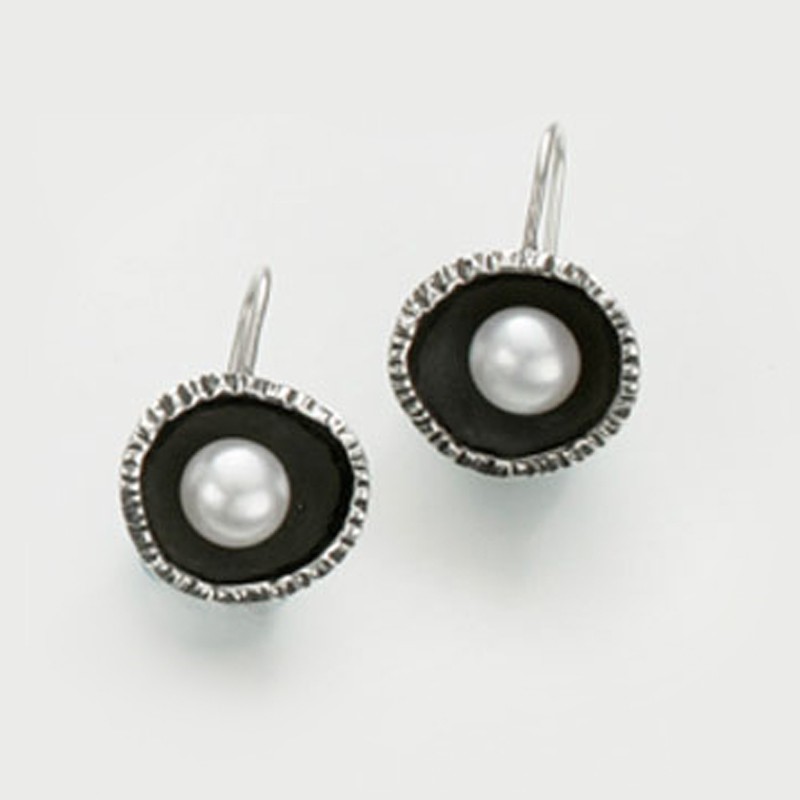 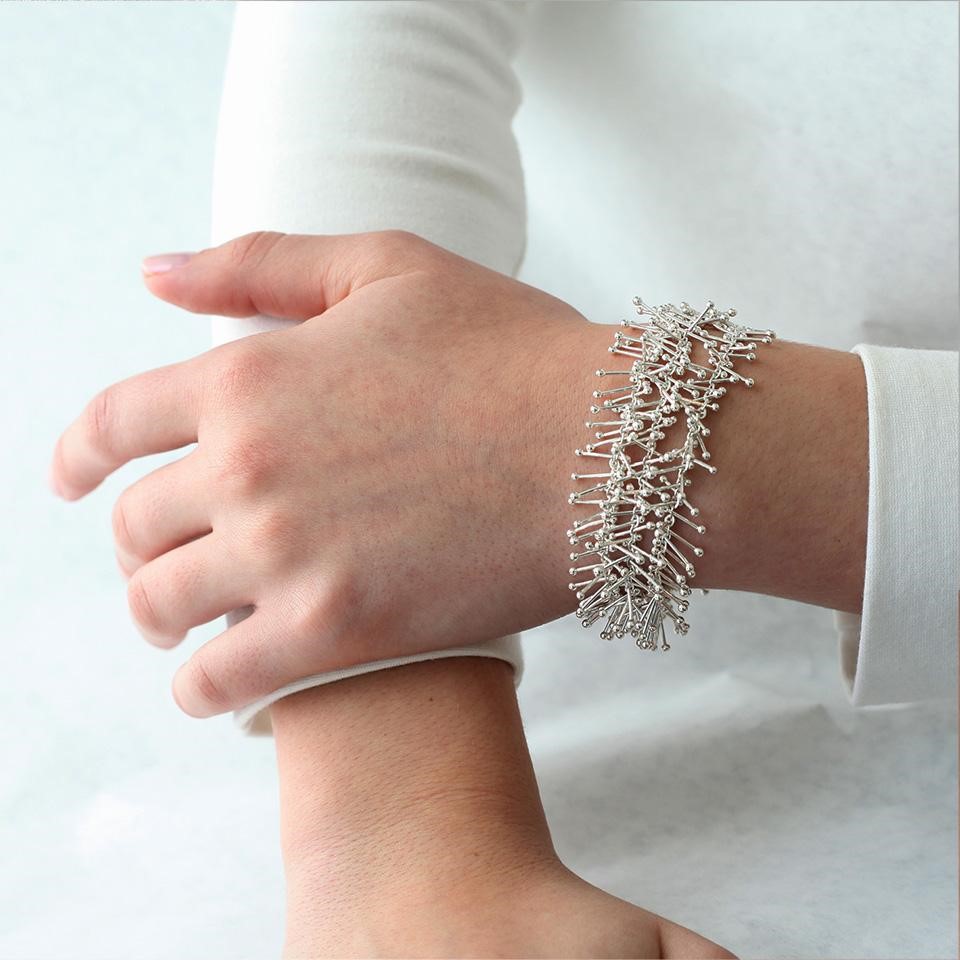 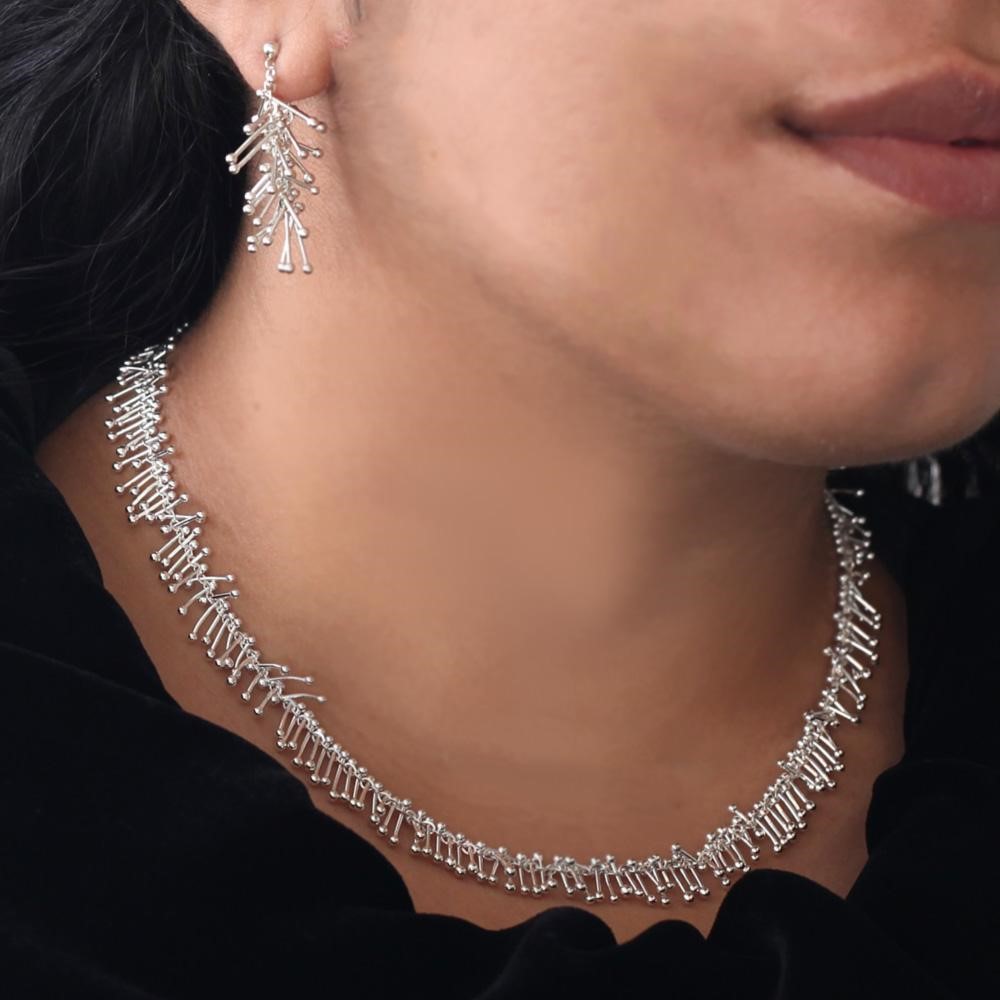 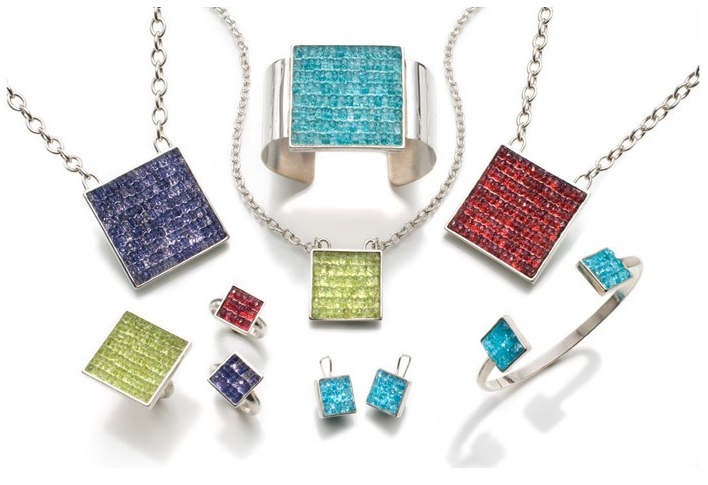 After 15 years, she decided to move her business in a new and exciting direction. She has applied her design skills to beautiful display cases stocked with her collections and is now offering them to select galleries and high-end boutiques. This enables Dominique to display a large quantity of her best-selling pieces at no cost to the retailer until the jewelry is sold.

Along with managing her busy studio and staff, wholesale orders, and designing future jewelry collections, Dominique stays busy with her husband and three children.

Most of all: she is a storyteller, as many of her designs tell a story. “I love connecting with my customer,” she said. “I’m all about human connection. It’s this connection that makes me love what I do.”