The Aptitude of an Advocate 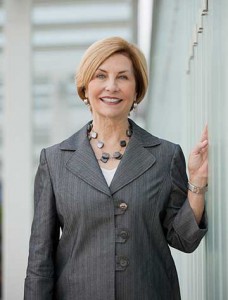 Elizabeth “Boo” Thomas, president and CEO of the Center for Planning Excellence in Baton Rouge

Elizabeth “Boo” Thomas has led community planning activities and redevelopment efforts in Louisiana since obtaining her Master of Landscape Architecture from LSU in 1989. As the former head of Plan Baton Rouge and the Mid City Redevelopment Alliance and the current president and CEO of the Center for Planning Excellence (CPEX), Thomas has been an advocate for smart growth in Louisiana throughout her career.

Thomas, who received her first degree from the LSU College of Education in 1966, didn’t initially plan to be a planner, though.

When Thomas’s daughter took three days of career aptitude tests in high school, the results pointed her toward a creative career path, such as architecture and design. Thomas wondered about her daughter’s innate penchant for creativity and decided to take the aptitude tests herself; she received the same results. “So my daughter must have gotten it from me,” she laughed.

Interested in pursuing her own talents, Thomas enrolled in a graduate-level course in landscape architecture at the LSU Robert Reich School. She never intended to finish a master’s degree, but she fell in love with the field—especially the public-planning potential of the profession. Her thesis project, “Green Links,” was focused on connecting Baton Rouge’s public schools and parks with walking and bike trails.

After graduation she was hired by an architecture firm to work on the first comprehensive land-use and transportation plans for East Baton Rouge Parish. “It was the perfect job right out of graduate school, working for the public sector from the perspective of a private firm,” Thomas shared. 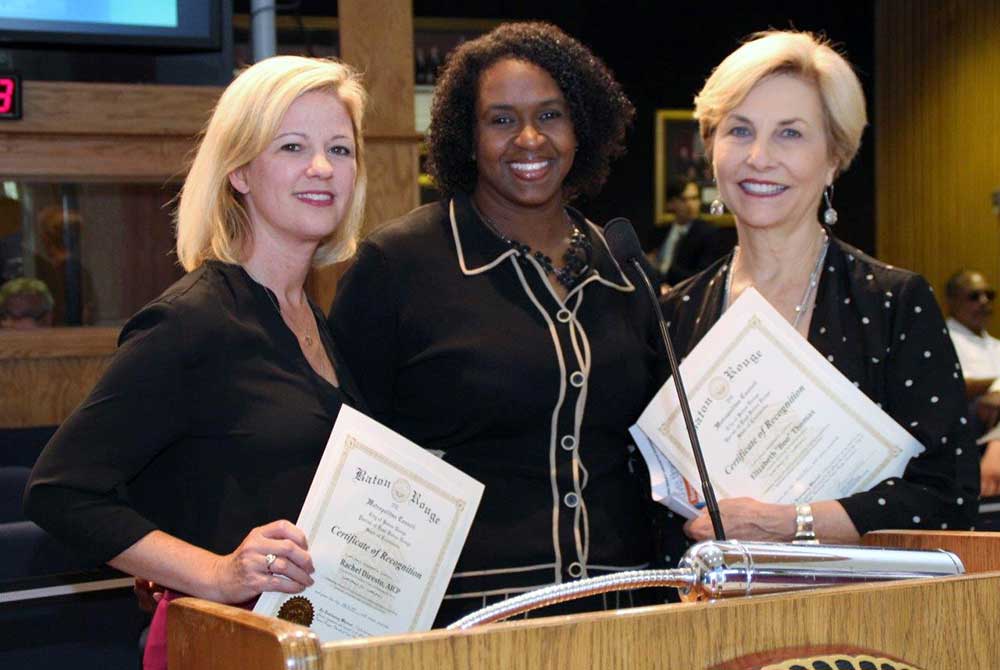 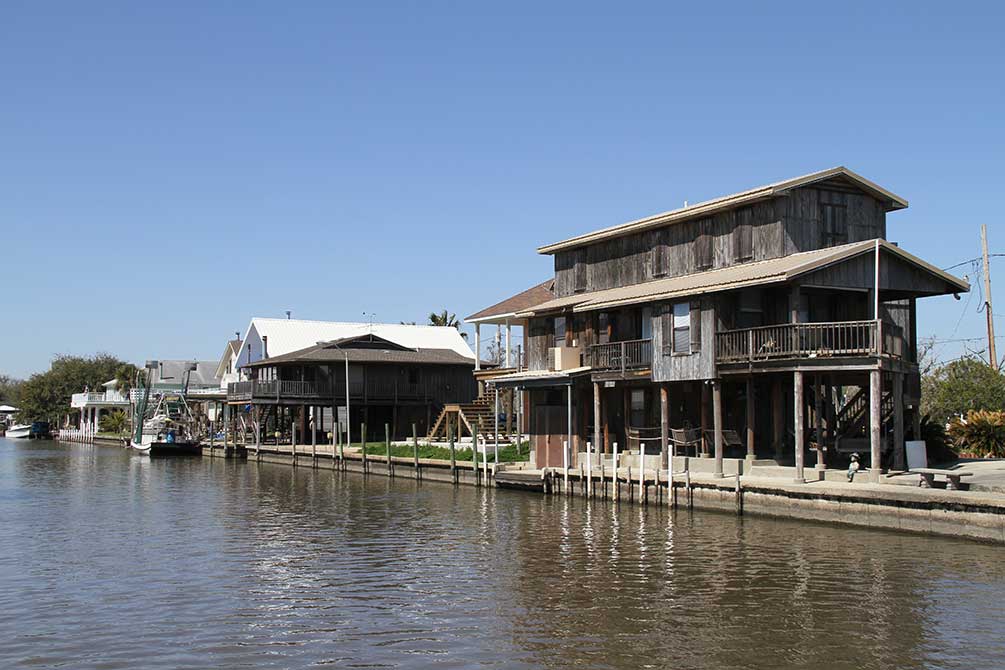 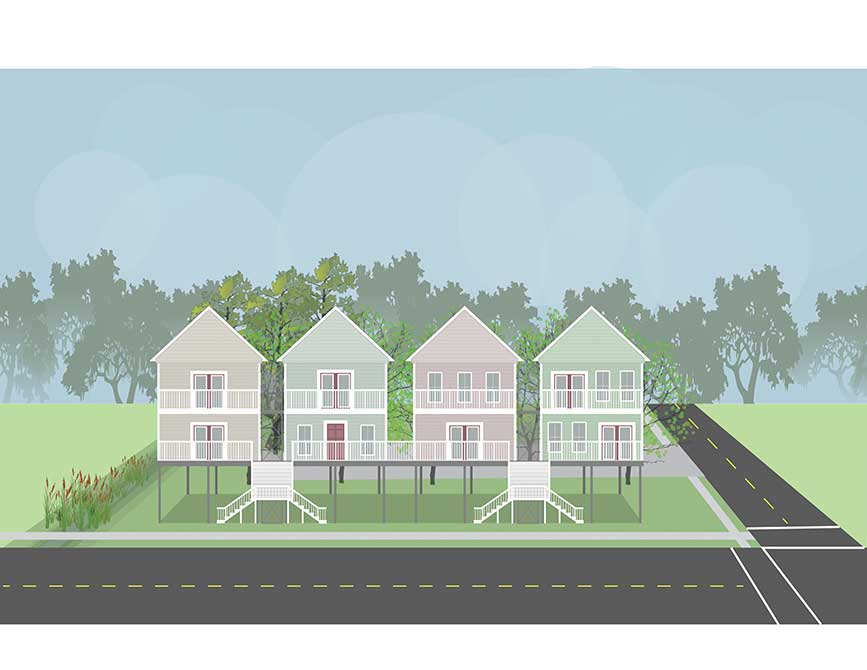 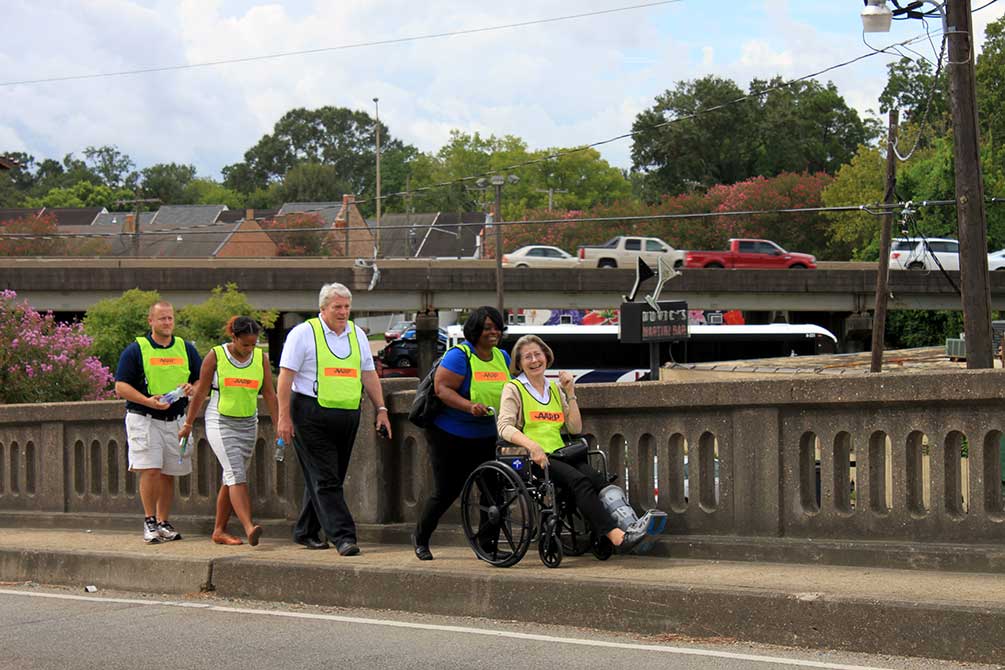 “I had found my calling in life,” she recalled, “inspiring, rewarding work that could make a difference in the lives of people by encouraging public officials and business leaders to look at communities in a different way.”

Plan Baton Rouge was recognized as a success by local and state organizations and identified as a national model for redevelopment. By 2006, Plan Baton Rouge had transitioned into the Center for Planning Excellence (CPEX), an extraordinary team of planners, strategists, designers, policy experts, environmental scientists, outreach specialists, and advocates—with Thomas as the lead. While Plan Baton Rouge focused on the revitalization of the downtown area, in the aftermath of Hurricanes Katrina and Rita, Thomas led CPEX in facilitating the Louisiana Speaks recovery process, the largest planning effort ever undertaken in the state. The Louisiana Speaks Regional Plan, created through the participation of more than 27,000 South Louisiana residents, set national records for public participation. Thomas has continued to build on that plan, overseeing CPEX’s planning efforts in parishes across the state.

“My degree in landscape architecture has provided me with the tools I need to be successful on any scale,” Thomas said. “Landscape architects have remarkable talents, including the ability to look at the best use of the land and to leverage assets toward the benefit of all citizens.”

Thomas helps make lives better for Louisiana citizens on a range of scales, whether she and her team are developing non-structural solutions that inhabitants of Louisiana’s coastal parishes can implement themselves to make their communities safer, consulting with Gonzales city officials on the zoning ordinances needed to complete a comprehensive plan, or staffing a regional mobility project demonstration for an Amtrak train between New Orleans, Louisiana, and Jacksonville, Florida.

Thomas remains focused on issues close to her heart in her adopted city, as well. Through the Complete Streets initiative, CPEX helped Baton Rouge pass resolutions to improve access and safety for cyclists and pedestrians. In 2013, Mayor-President Kip Holden, with CPEX’s help, put together Better Block Baton Rouge to demonstrate how Government Street would work if it was converted to three driving lanes and two bike lanes. The organization is currently working on a new initiative to make the Perkins Road overpass area more pedestrian safe.

In recognition of her outstanding contributions to Louisiana, Thomas has been honored by the Baton Rouge Area Foundation, Baton Rouge Area Chamber, the YMCA, the Baton Rouge Business Report, LSU, and the Louisiana Architecture Foundation. In 2009, Thomas and CPEX were awarded the Olmsted Medal by the American Society of Landscape Architects (ASLA). One year later, in 2010, Thomas became the second woman in Louisiana named to the ASLA National Council of Fellows, one of the highest honors the organization bestows on individuals in the profession.

CPEX employs two other LSU Robert Reich School of Landscape Architecture alumni, Haley Blakeman (BLA 1994) and Ryan Benton (BLA 2014). Everyone who works at CPEX is mission driven, said Thomas. “Everyone really feels they are improving the quality of citizens’ lives.”

Visit cpex.org for more information about Thomas and the Center for Planning Excellence.