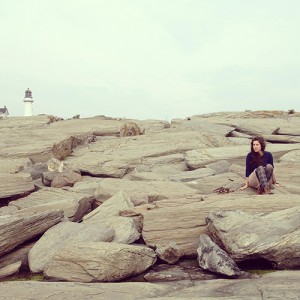 Louisiana native Katie Burk received her BFA from LSU in 2008, and moved to Washington, D.C. to pursue a career in graphic design. Currently, she is senior graphic designer at the marketing agency Nobody in Washington, D.C. Nobody develops brand strategies, media campaigns, and social content to help define clients’ brands. Katie has expertise designing for diverse clients, across a range of mediums.

“I like to think my passion for what I do always shines through,” Katie said. “There’s a lot of variety in what I do. At my past and current jobs, I’ve gotten to do everything from create and arrange props for photo shoots, design physical products such as packaging and bags, and do a lot of digital design at the same time.”

Take for example a recent project for the White House Historical Association (WHHA): Katie designed and helped develop the content for infographics for the Movember “Facial Hair of the U.S. Presidents,” a fun series that was part of the WHHA’s partnership with the Washington Nationals Baseball team. “The Movember graphic is a collection of the past U.S. presidents with facial hair, along with ‘manly’ facts as researched by my small Nobody Media team and me (and confirmed by the WHHA Historians!)” she said in her blog. “The design itself is play off of vintage presidential campaign posters.” 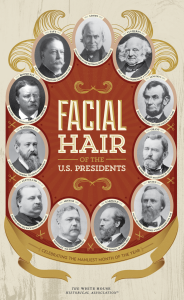 Movember Poster, by Katie Burk (Nobody)

Other interesting recent projects Katie has worked on include a stop motion video for Nando’s PERi-PERi campaign; designing matchbox game graphics/packaging for Swiss game company Helvetiq; and creating these stickers: “I did an artist collaboration with writer/producer/person extraordinaire, Jennifer Mills,” Katie said. “Together, we made these horrifyingly fun stickers of host Peter Sagal and scorekeeper Bill Curtis for a kids’ edition of NPR & WBEZ’s Wait Wait… Don’t Tell Me!” 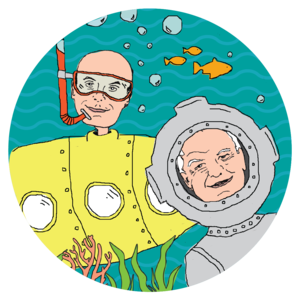 Katie was the design project manager, art director, and production designer for the rebrand of NPR’s Oddly Informative News Quiz, Wait Wait… Don’t Tell Me! (The rebrand went live in September 2013, replacing the original 1998 look.) She also worked on numerous items for the NPR Shop.

From 2008 to early 2014, Katie was a graphic designer at NPR headquarters, in the marketing, branding, and communications department, where she contributed to marketing campaigns including “I ‘Heart’ NPR.” (NPR: National Public Radio is a non-profit membership media organization based in Washington, D.C. that serves as a national syndicator to a network of over 1,000 public radio stations in the United States.) She enjoyed working on a wide range of projects for NPR: 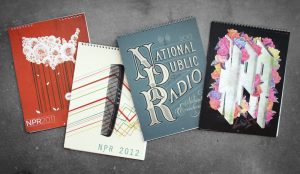 She was also previously the graphic designer on the live events team at The Atlantic, where she worked on branding for local, national, and international events from 2014 to early 2015. The magazine is a leading literary publication, subscribed to by over 450,000 readers a year. There she had the opportunity to design for a huge, widespread audience.

Katie didn’t intend to go into graphic design when she entered LSU, but found her passion while taking classes at the School of Art. “I had done after-school painting classes throughout my high school years, but I hadn’t really thought about design until I started taking studio art classes at LSU my freshman year,” she said. “When I learned what it was all about from people who were already in the program, I thought it could be the right path for me.”

She said that the graphic design curriculum being part of the Studio Art program shaped how she works today. “I still get to use my skills from all of the photography, drawing, printmaking, and even ceramics classes that I took,” she said. “I’ve always been one to do things by hand first, before I get to the computer. That was also a huge part of LSU’s graphic design curriculum, and I still try to do that now.”

Katie is also a ceramicist. “Ceramics was one of my original loves in college, even before graphic design,” she said. “The mix of form and function is what really draws me to it. I’ve picked it up again, having taken classes over the past year at Corcoran School of the Arts & Design. My counter tops now overflow with my newly-fired friends.”

As for other fun facts? “My real middle name is Foto.”

2017
Shortlisted at Cannes Lions (Nando’s Everyone is Welcome campaign)