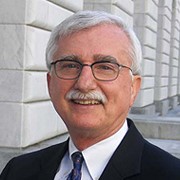 Jesse is the assistant circuit executive for space and facilities for the United States Fifth Circuit Court of Appeals, a position he has held since 1987. He has a Bachelor of Architecture from LSU (1972) and a Master in Urban & Regional Planning from the University of New Orleans (1991). As a leader in the federal court system, he has shaped the planning, design, and construction of more than 200 new courthouse and renovation projects in Texas, Louisiana, and Mississippi. Jesse has been an active member of AIA since joining as an associate in 1974 and was elected to the institute’s College of Fellows in June 2013.