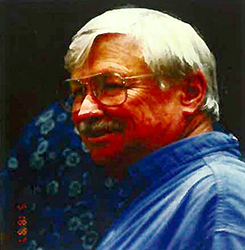 Christopher Crawley Friedrichs, a landscape architect, was born May 19, 1932, and passed away on Friday, July 31, 2015, at the age of 83. A native of New Orleans, Friedrichs studied landscape architecture at LSU, earning a Master of Science degree in 1958, making him one of the earliest graduates of what is now the Robert Reich School of Landscape Architecture. He practiced in New Orleans and surrounding regions north of Lake Pontchartrain.

From 1960 to 1966 he was in partnership with Albert S. Bergen (1926–2007); Bergen and Friedrichs was one of the first professional landscape architecture offices in New Orleans. In the 1970s Friedrichs worked at the Parks and Parkways Commission of the City of New Orleans as the city’s first landscape architect. While in this position, he supervised the design and construction of numerous new municipal parks, such as Joe Brown and Brechtel Park, as well as the renovation of historic parks like Washington Square, Coliseum Square, and Lafayette Square. His work represented the first significant expenditure of municipal funds for public parks in New Orleans. He also envisioned how the city’s park inventory might expand, suggesting in the mid-1970s what is now being developed along the former Carondelet Canal as the Lafitte Corridor Greenway. Together, Friedrich and the late Mildred Fossier, the irascible director of the Parks and Parkways Commission, raised awareness among elected officials and the general public about the value of parks, neighborhood open spaces, and street trees. More than once they instigated—behind the scenes—public protests over proposals by commercial interests to remove trees from public rights-of-way, and they often fought passionately with elected officials and other city agencies that viewed trees as civic inconveniences. More often than not they lost these battles to save street trees, but in retrospect, their actions contributed significantly to raising awareness among the public about the benefits of public green spaces and the value of urban trees. After leaving the Parks and Parkways Commission in the early 1980s, Friedrichs practiced through a one-man office doing consulting and residential work.

Friedrichs knew people from every strata of New Orleans society and was equally adept at working with all, regardless of background. He was a local pioneer in working with historic landscapes, and he was an early advocate of using native plants and preserving local traditions in plant selection and planting design. His designs drew heavily on his extensive knowledge of the New Orleans community, its history, lifestyles, and traditions. Friedrichs eschewed the rigor and formality of office practice in favor of taking on jobs that interested him, working with clients he liked and mentoring younger professionals, all of whom become lifelong friends.