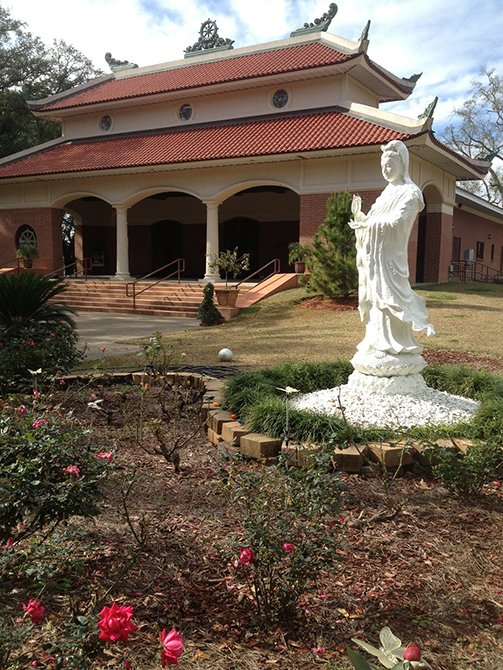 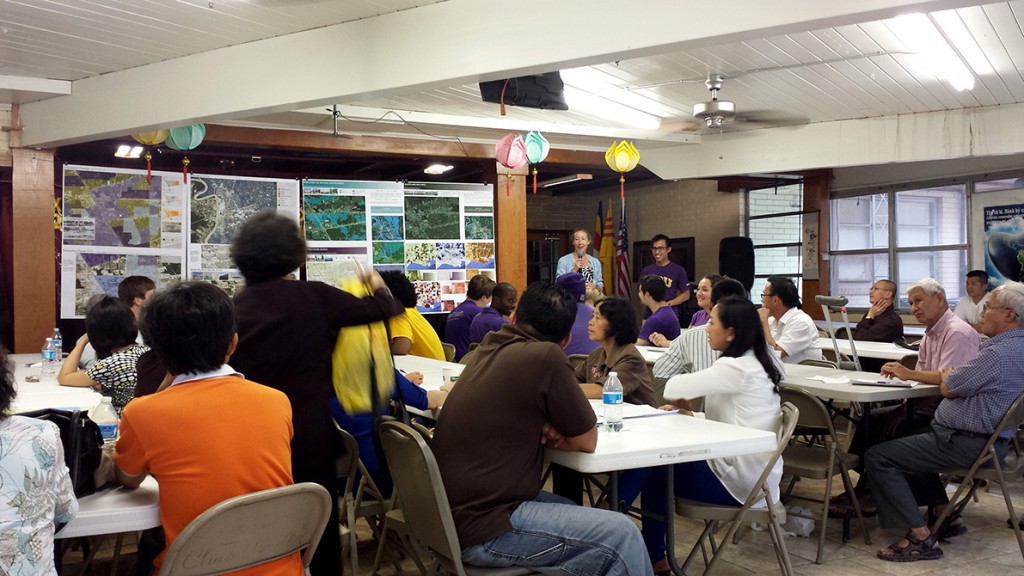 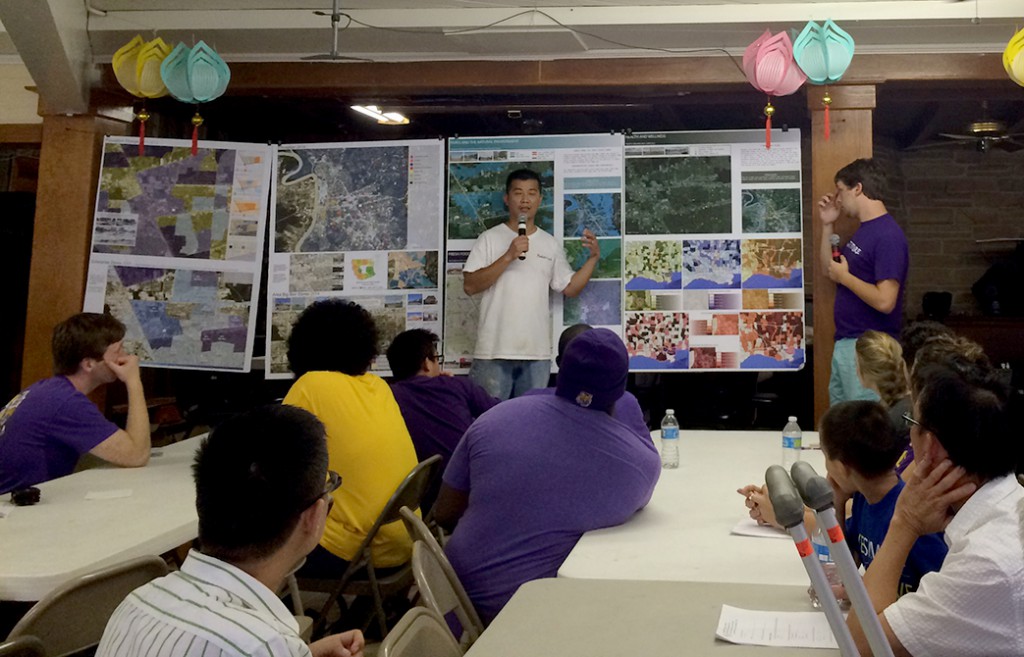 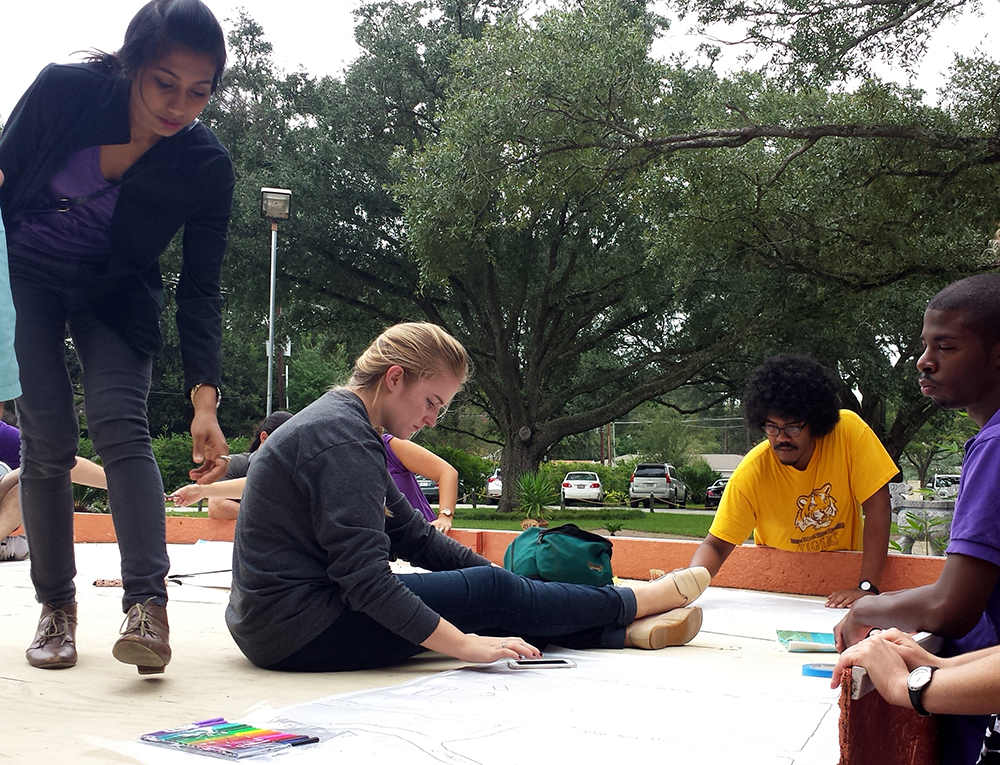 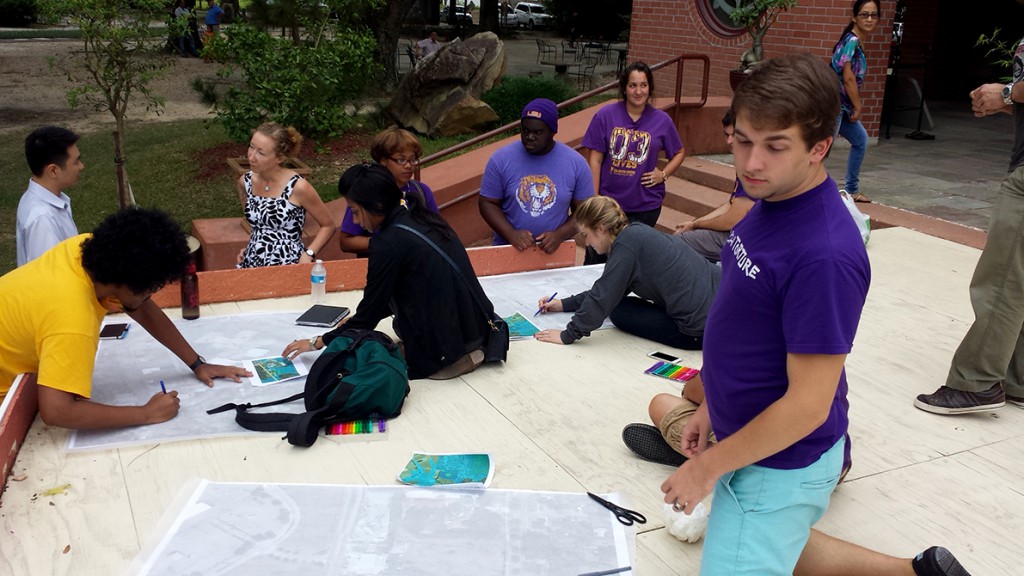 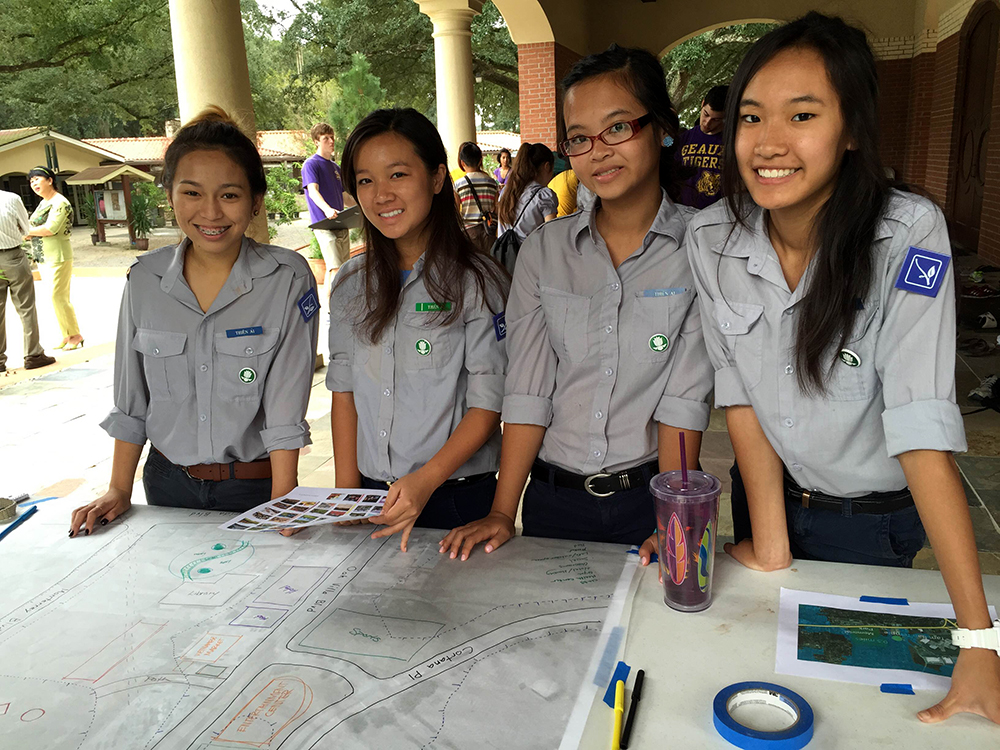 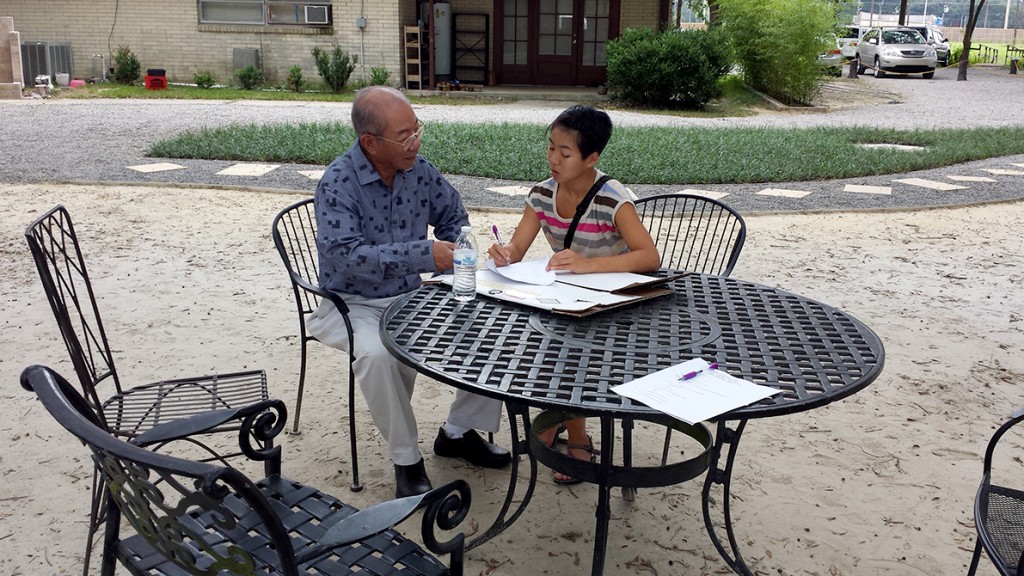 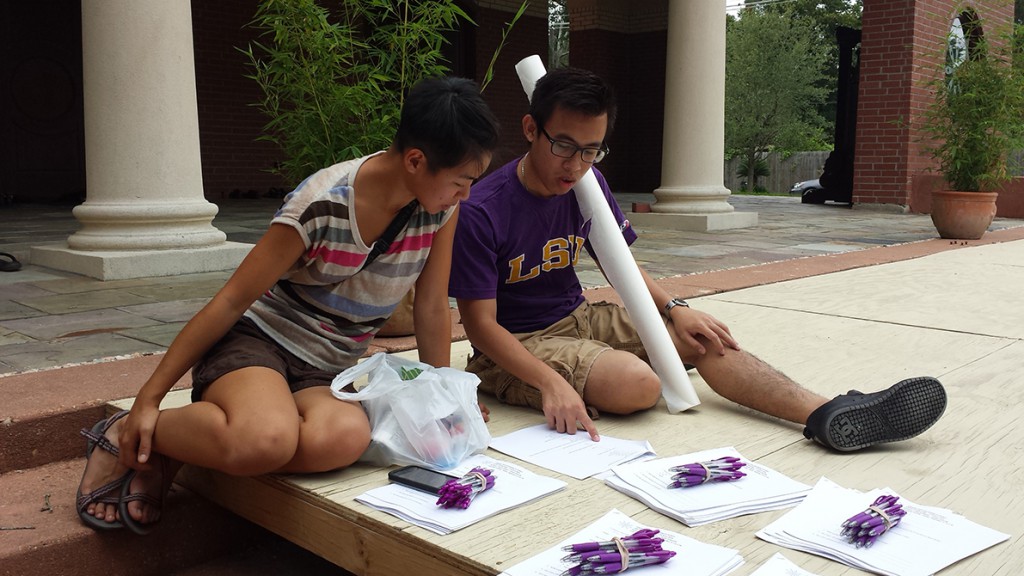 In Assistant Professor Catherine Bonier’s service learning studio, ARCH 4001, fourth-year architecture students are working with the Vietnamese Buddhist community of Tam Bao Temple in Baton Rouge to create a 20-year vision plan for the redevelopment of Cortana Mall and areas adjacent to the temple.

The students’ mandate is to collect data and design physical changes to the Cortana site, while also learning about mindfulness—a practice that underlies the ethics of the Vietnamese community. At Tam Bao Temple, Buddhists and friends from every religion practice mindfulness to reduce stress and gain clearer focus. Mindfulness means constantly training the mind to focus on the current situation instead of getting caught up in past or future pressures, the opposite of multi-tasking. Mindfulness is not a religion but a technique to cope with constantly changing conditions. This practice supports the approach to planning that English architect and influential teacher and writer Cedric Price (1934–2003) called, “calculated uncertainty,” because it encourages the clear vision and stable foundation from which to move flexibility as conditions change.

Students were charged with inventing multiple futures based on engaging the present moment. They began by working in groups to map and uncover the qualities of the site. They met with community members to talk about homes, parks, schools, families, health, recreation, and jobs as well as the community members’ concerns and hopes.

According to louisianafolklife.org, the Vietnamese make up 44 percent of Louisiana’s Asian population and are the largest immigrant or refugee group in the state. More than 3,500 Vietnamese live in East Baton Rouge, and, according to the Center for Cultural and Eco Tourism, most currently either own their own businesses or work for Vietnamese-owned operations. In Vietnam, people live in groups as a family. They share what they have and help out even when they cannot afford it. Many people interviewed by representatives of the Louisiana Folklife Program said that America’s focus on the individual rather than the community was one of the hardest things to adjust to when they immigrated to the United States.

In studying the country and culture of Vietnam, the students found that food, festivals, and agriculture are very important, just as they are in Louisiana. Through their research and community meetings, the students came to several conclusions:

Questionnaires designed by students found that 42 percent of survey respondents hold a bachelor’s degree, six percent a master’s degree, and six percent a PhD. A college education is the most important goal parents have for their children. Happiness, retirement, and education all rate at least twice as important as a “profitable career.” Yet this is a very successful community. More than half of those surveyed are self-employed with almost half engaged in engineering, architecture, medicine, law, management, or teaching. Twenty-five percent work in the retail, restaurant, cosmetology or beauty fields. A third of households include three generations, and many of those participating in mapping and visioning exercises requested that assisted-living facilities, schools, and parks be added to the plan. Twenty percent of community members spend at least four hours a day outdoors for leisure or exercise, with soccer as the most popular form of physical recreation. More than half of those surveyed grow their own vegetables at home. This is a community committed to health and education, and also to sustainability and connections with nature. Nature is embedded in Buddhist philosophy as a foundation for wisdom.

While the community is very private and quiet, the members’ desire to participate fully in a multicultural society is in keeping with the philosophy of Buddhist abbot Thich Dao Quang, their spiritual teacher. Dao Quang, known as “Thay,” met with LSU students to discuss and teach mindfulness. Thay, who is also a counselor pursuing a graduate degree in psychology, stressed his hope to spread the benefits of mindfulness meditation to people of all faiths. He discussed scientific studies which have demonstrated meditation’s positive impact on mental and physical health. This wish for a more peaceful and healthy society made up of diverse groups is in alignment with Baton Rouge’s smart growth guidelines for urban planning.

In the comprehensive plan, Future Baton Rouge, adopted in 2011, planning agencies outlined a vision that would guide development for the city. The plan was large and necessarily vague but adopted certain guidelines for smart growth in line with various federal initiatives, including “walkable districts.” Future BR predicted that the large Cortana Mall, located immediately west of Tam Bao Temple, would be redeveloped in 20 years to become a mixed-use area, which would protect and connect residential areas. “Mixed-use as a general guideline often results in mall/housing areas similar to Perkins Rowe—a generic typology found all over America,” said Bonier.

Bonier’s studio is working to define a walkable, mixed-use development plan that refuses the generic mixed-use typology, reacting instead to the specific processes and hopes of one community. The students’ site design must indicate a means of expansion, replication, or distribution to occupy the Cortana Mall area over the next 20 years. Students are inventing time phase designs that address long-term change according to specific guidelines, and they are developing these designs while maintaining communication with the Tam Bao community.

James Andermann represented the East Baton Rouge Redevelopment Authority at the studio’s mid-term review earlier this fall, and local architect Phong Le of Le Architect, LLC, a community leader within Tam Bao and the designer of the existing temple, was also a critic at the review. Le will be working on a multi-purpose community hall for the Tam Bao Temple and is considering hiring one of the students to assist as an intern. Bonier met Le at the Tam Bao community, and it turned out he was a student of Associate Professor Greg Watson’s, many years ago, when Watson was teaching architecture at Mississippi State University. On top of the internship possibility, Le has offered a $500 prize to the student with the best project at the final review, which takes place on Friday, November 21, 2014, from noon to 5 p.m., in the LSU Design Building Commons, room 104. All are welcome to attend. Winners will be announced and student work from this course will be added to the LSU School of Architecture Portfolio at the end of the semester.