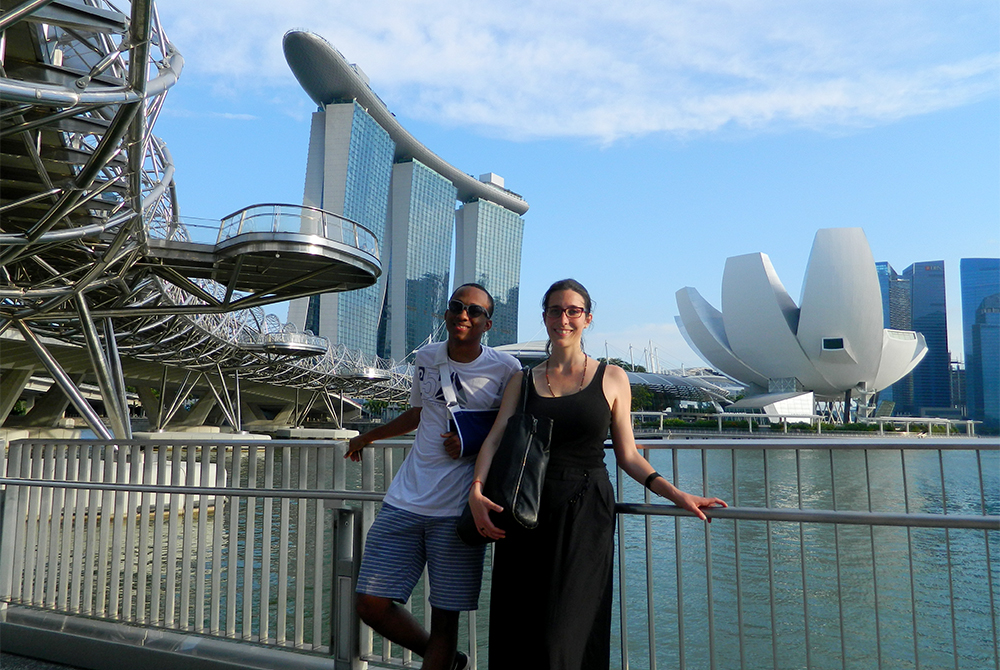 The LSU School of Architecture was one of 10 schools—and the only U.S. institution—invited to participate in the Designing Resilience in Asia 2015 International Design Competition held at the National University of Singapore’s School of Design and Environment June 29–30.

In order to promote innovative responses to disaster situations as well as engagement with society through design, architecture and building science students were asked to propose design solutions for an area adjacent to Xinxing Harbour, a village located in the Hainan Province of the People’s Republic of China. The site is in the Cheng Mai prefecture, west of the provincial capital of Haikou City. The main local culture and livelihood is premised on small-scale farming and shallow ocean fishing. The village currently comprises 270 families and is expanding southward into a low-lying area to accommodate an additional 80 to 100 families.

The village and the area of proposed expansion are located in a typhoon-prone region of Asia; Xinxing Harbour endures an average of 10 typhoons a year. The invited teams were asked to address the main focus of the competition: the utilization of urban and architectural design as well as building technologies to endow, support, amplify, and maintain a community’s resiliency in light of natural disaster events—in this case, a typhoon and its associated effects, including high winds, storm surge, flooding, and excessive precipitation.

The LSU team was made up of two faculty advisors—Assistant Professor Robert Holton and School of Architecture Director and Professor Jori Erdman—and a mix of graduate and undergraduate architecture and landscape architecture students representing five nationalities who volunteered their time during the first month of summer break to work on the project:

The competition sponsored transportation and accommodation for two student representatives and one faculty advisor from each participating school to present their design proposals. Ana Orosco, entering her second year of the joint Master of Architecture/Master of Landscape Architecture program, and Giovanni Coakley, entering his third year of the Bachelor of Architecture program, represented the LSU School of Architecture’s team. Orosco and Coakley were accompanied by Holton and Tom Sofranko, associate dean of the LSU College of Art & Design and interim director of the LSU School of Interior Design. 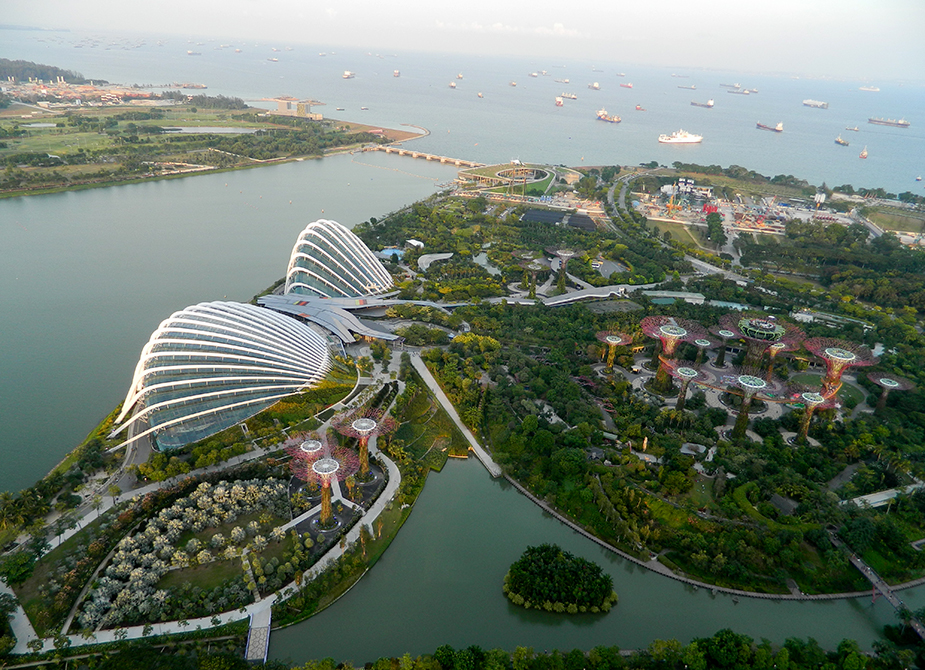 “It was an exceptional experience working with the students and going to Asia where we had the opportunity to meet the other teams from all over the world,” stated Holton. “It was a very diverse group!” 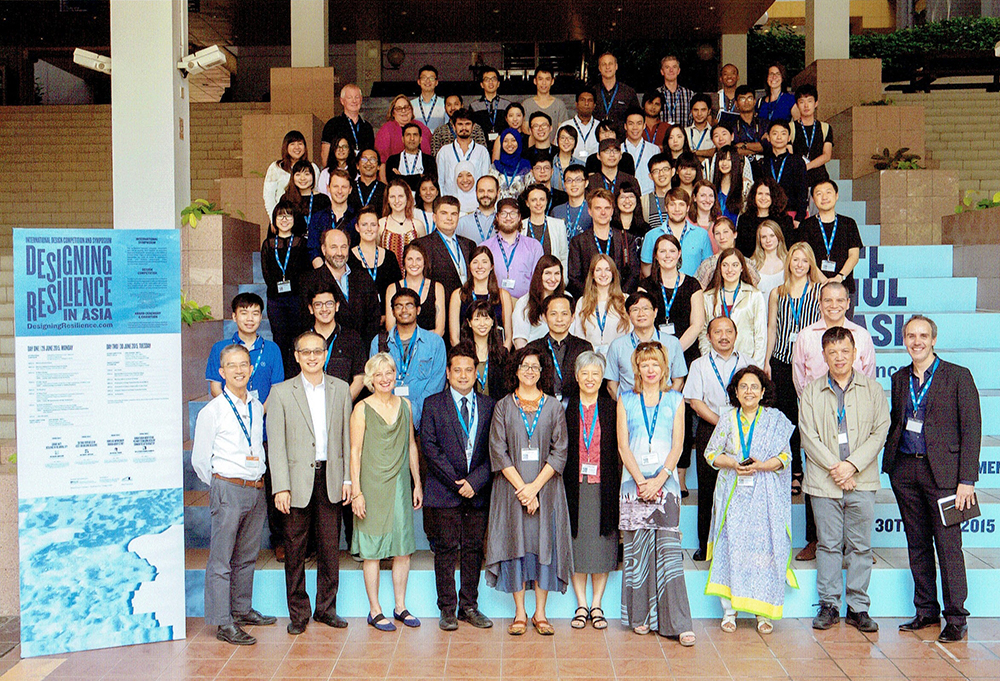 Student representatives, faculty advisors, and jurors of the Designing Resilience in Asia 2015 International Design Competition held at the National University of Singapore

Orosco and Coakley are also interning this summer with the LSU Coastal Sustainability Studio, a trans-disciplinary program of the College of Art & Design, College of Engineering, and the School of the Coast & Environment. According to Erdman the program’s involvement with CSS is one of the reasons the school was selected to participate in the competition, and Orosco said CSS is the main reason she decided to pursue a Master of Architecture at LSU. She heard about the studio while she was in India studying yoga at an ashram.

“In India I had the chance to speak to an engineer from Israel during a public meeting on cleaning the Ganges. He had created a bio filtration system utilizing local resources as a water treatment solution for polluted rivers,” Orosco recalled. “He knew about CSS and suggested I look into LSU as I was interested in coastal issues—something Louisiana and Rio, where I’m from, have in common.” 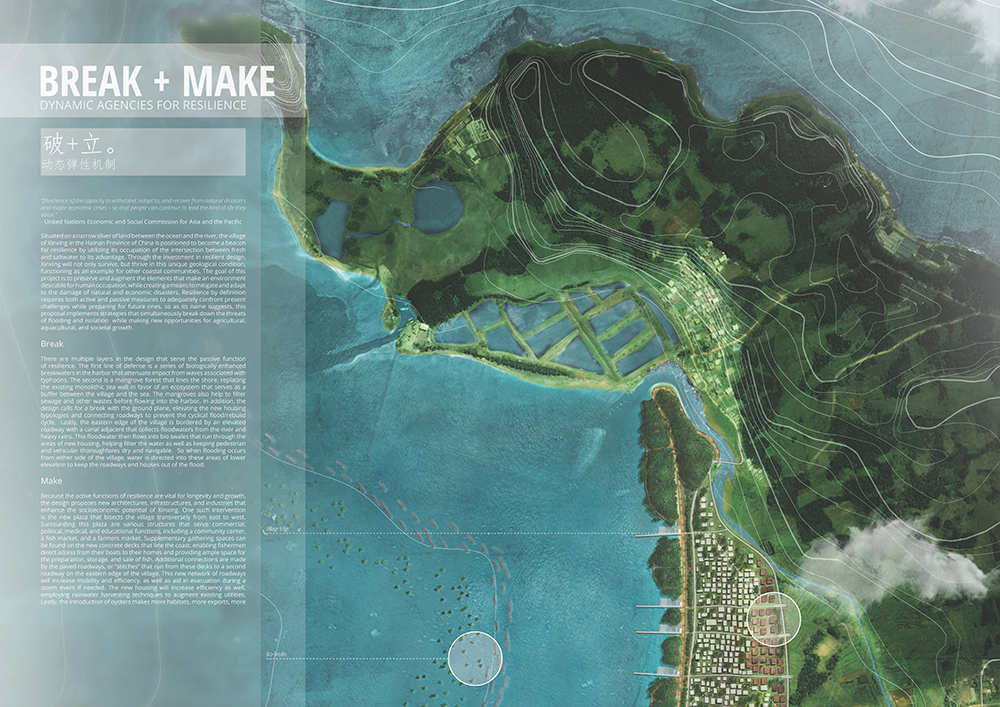 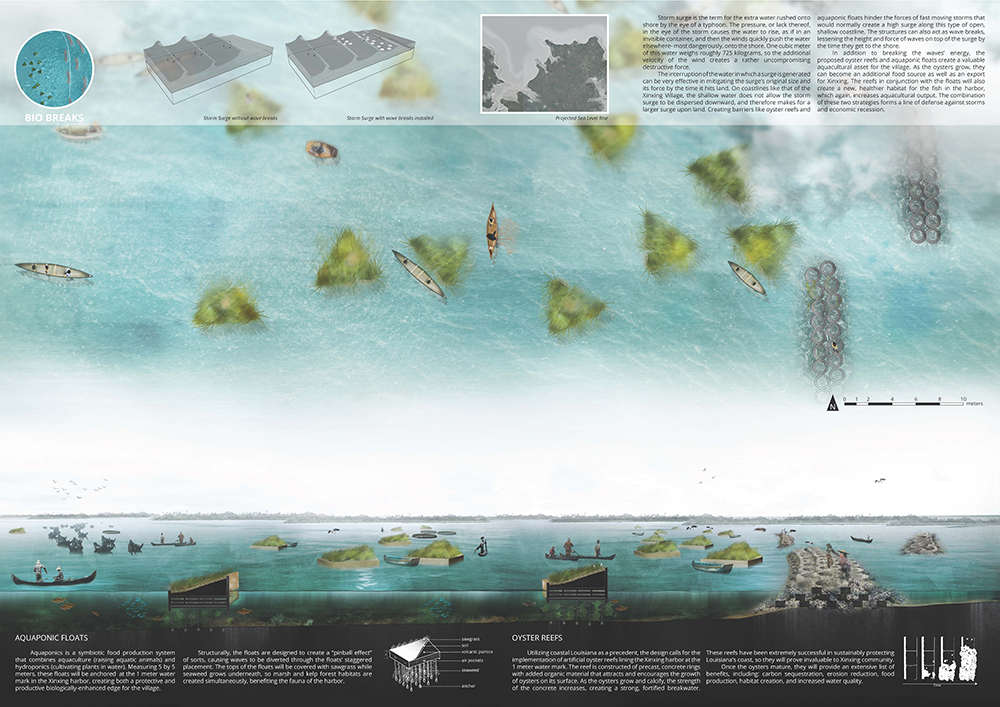 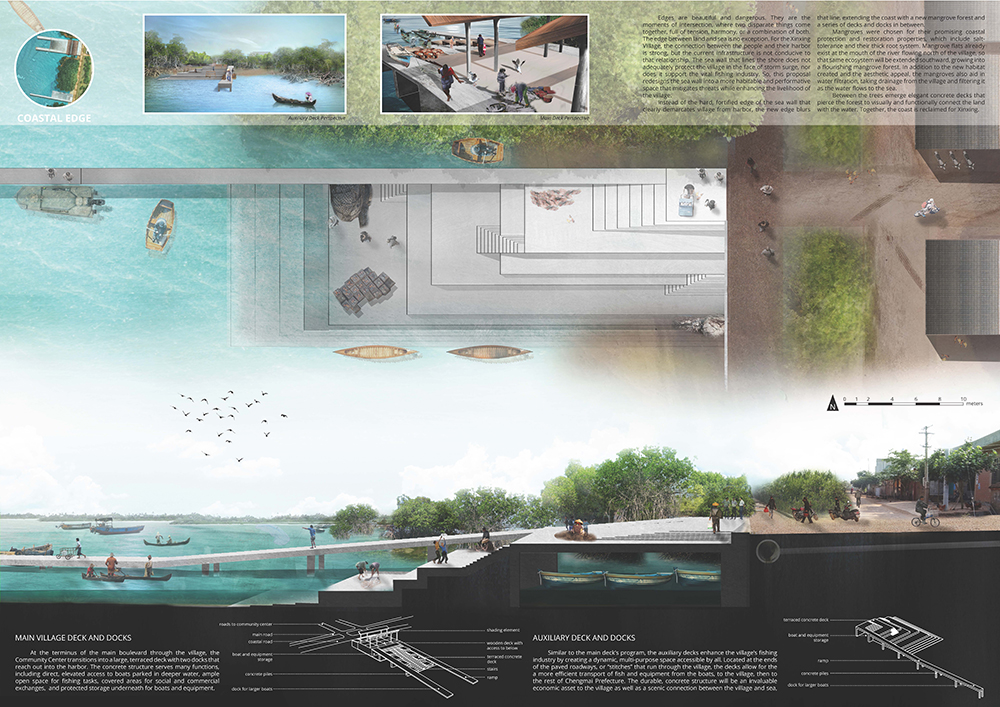 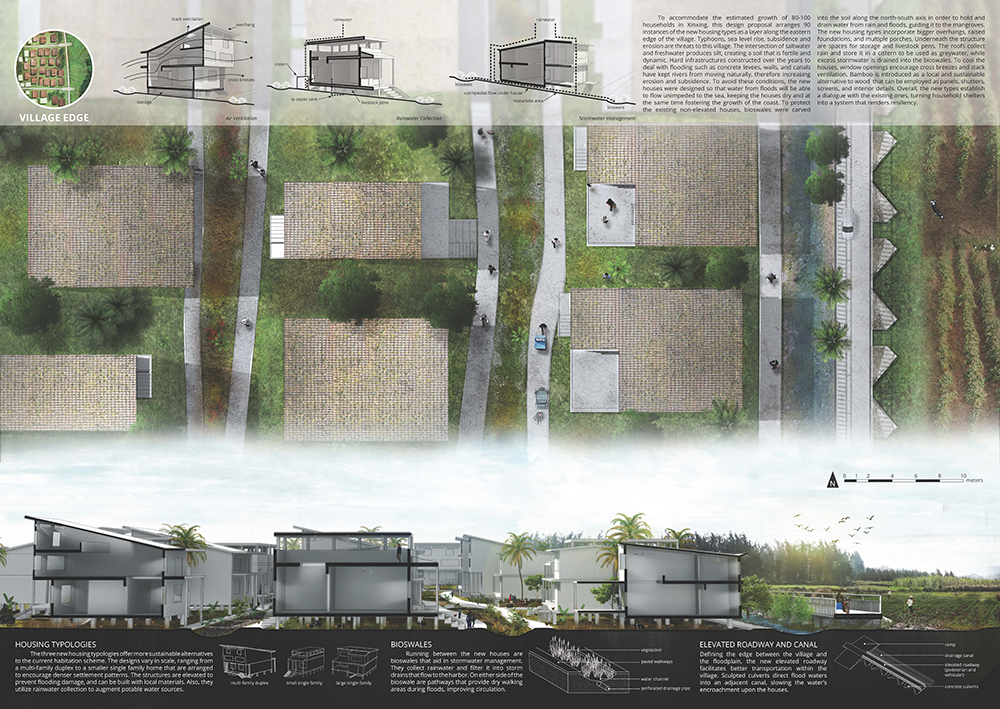 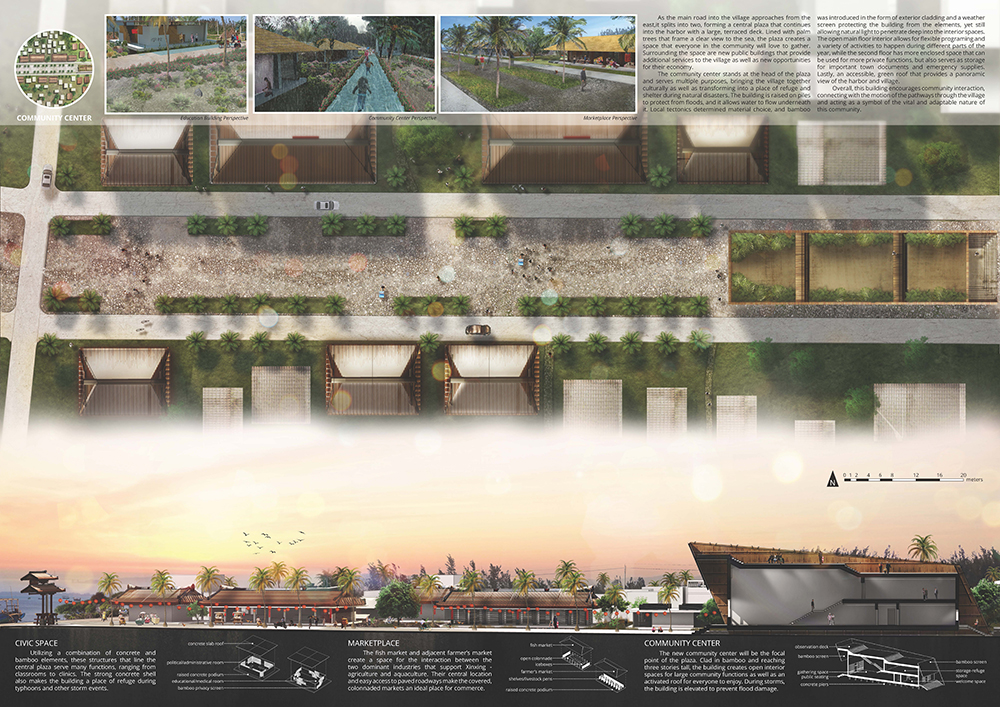 Their plan also proposed to “make” new architectures, infrastructures, and industries to enhance the socioeconomic potential of Xinxing, such as a new plaza that bisects the village from east to west and various structures to serve commercial, political, medical, and educational functions. Concrete decks lining the coast enable fisherman direct access from their boats to their homes and provide ample space for the preparation, storage, and sale of fish. Additional connections, or “stitches,” run from the decks to the roadway on the eastern side of the village. The new network of roadways aims at increasing mobility and efficiency and also functions as an evacuation route during a storm event when needed. The team’s proposed new housing will increase efficiency by employing rainwater harvesting techniques to augment existing utilities. 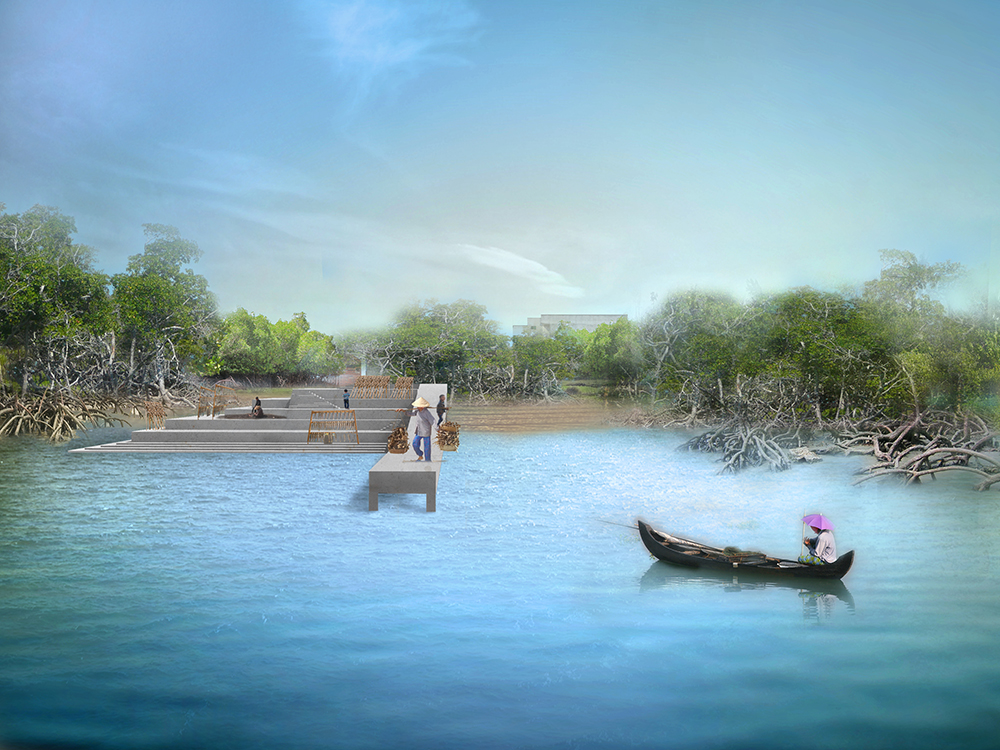 “We learned a lot about China and Hainan,” said Orosco of the experience. “It was interesting because the competition challenged the concept of resilience—it’s not just about disaster relief or protection from natural disasters.”

“The competition is really about having these conversations,” added Coakley for whom the trip to Singapore was the first time he has traveled beyond the Bahamas and the United States. “It was an eye-opening experience,” he laughed, “especially the long flight.”

The LSU School of Architecture has the opportunity to participate in the international competition again in the upcoming year. Erdman said the school has plans to incorporate the competition into a semester-long design studio, with the potential for students to visit the next project site and have different teams working on design solutions as each school can present up to two proposals.

“Our students did a great job with the project, especially coming together as a team to get the entry completed,” said Erdman. “Our invitation to be a part of this competition demonstrates the recognition we are getting from our work in the coastal condition. The students’ final design is further evidence that architects have something to offer in this context that is dominated by engineers and scientists. We are proud of what the students learned and produced and are looking forward to next year!”