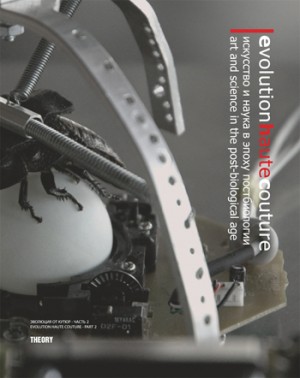 LSU School of Art Professor Susan Elizabeth Ryan has contributed an article to the anthology Evolution Haute Couture: Art and Science in the Post-Biological Age, Part 2: Theory, edited and curated by Dmitry Bulatov and published in English and Russian by the Kaliningrad Branch of the National Centre for Contemporary Arts in 2013.

An authority in the emerging field of digital media art history and theory, the article Ryan contributed, “Emotional Exchange: Wearable Technology as Embodied Practice,” is based on her research into the development of wearable art as art and design. Ryan received an Award to Louisiana Artists and Scholars (ATLAS) grant in 2009–10 for her research into wearable technology. Her book, Garments of Paradise: Wearable Discourse in the Digital World, a history of wearable technology, will be published by MIT Press in 2014.

In “Emotional Exchange,” Ryan explores “smart wearables,” such as aromatherapy clothing, mood-activated luminous dresses, and color-changing fabrics used to monitor autonomic body functions, and how these embodied technologies might impact our lives and social relations.

The book is the second of a two-volume anthology in which renowned representatives of contemporary art, science, and philosophy show how artists are creating new forms and identities using technology and biology—or contemporary techno-biological art.

The first volume of Evolution Haute Couture: Art and Science in the Post-Biological Age was published in 2009 and won the National Innovation Prize in Russia. This volume focused on practice and included technical information and photographs of art projects, as well as a unique collection of 45 documentary films on two DVDs about artworks recently created using the latest 21st-century technologies.

This second volume of Evolution Haute Couture contains essays by 30 artists, philosophers, scientists, and art historians from around the world, along with approximately 300 black-and-white illustrations, images, and photographs. Contributors include prominent and famous theoretical writers such as Roy Ascott, Boris Groys, Simon Penny, and Stephen Wilson. (View the table of contents here.)

The contributors attempt to represent the contemporary theoretical panorama about the influence that the “new” sciences and disciplines—biology, genetics, artificial intelligence, artificial life, robotics, cybernetics, neurosciences, and nanotechnologies—can achieve in contemporary culture and in art forms, in order to foster a global reflection about this evolution.

The editor of the anthology, Dmitry Bulatov, is an artist, curator, and art theorist whose research focuses on different aspects of interdisciplinary art media, as well as on submediality aesthetics. Bulatov’s artworks have been presented internationally, and he has curated more than 20 major exhibitions in Russia and abroad, including SOFT CONTROL: Art, Science and the Technological Unconscious as part of the Maribor–European Capital of Culture in 2012. Bulatov has been the curator at the Baltic Branch of the National Center for Contemporary Arts in Russia since 1998.

About Susan Elizabeth Ryan
Professor Susan Elizabeth Ryan teaches contemporary and new media art history at the LSU School of Art and is an affiliate of the LSU Center for Computational Technology. She helped found an art and engineering undergraduate minor at LSU as principal investigator for the interdisciplinary Arts, Visualization, Advanced Technologies and Research (AVATAR) initiative. Ryan has lectured internationally on dress and creative technology and has contributed articles to Leonardo Journal and the journal Intelligent Agent. Ryan has also published two books on artists’ autobiographical practices. She assembled, edited, and annotated Somehow a Past, the autobiography of American painter Marsden Hartley, published by MIT Press in 1996 and 1998, and she is the author of Robert Indiana: Figures of Speech, published by Yale University Press in 2000.

About LSU School of Art
The LSU School of Art combines the best of both worlds: the resources and faculty of a large liberal arts institution and the personal attention that comes in a close-knit community. Students in the School of Art develop specialized skills while experimenting with various mediums, exploring their own creative intuition, and studying art history and contemporary art theory. Education comes from intensive critiques, working studio classes, dedicated professors, and engagement with the larger arts community through a curriculum that combines academic teaching and hands-on experiences, both on and off campus. For more information, visit art.lsu.edu.