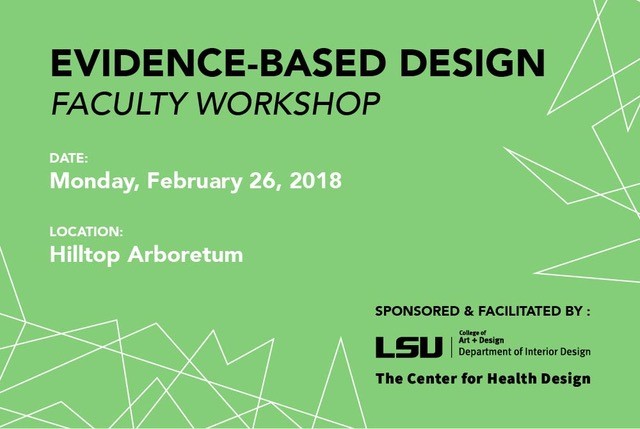 The College of Art + Design and School of Interior Design are hosting a workshop for faculty interested in Evidence-Based Design (EBD). The event will be facilitated by the Center for Health Design. Workshop experts/coaches include Donna Deckard (Center for Health Design), Frank Zilm (University of Kansas), Margaret Calkins (Mayer-Rothschild Foundation), and Rosalyn Cama (CAMA Design).

EBD is defined as “a process for the conscientious, explicit, and judicious use of current best evidence from research and practice in making critical decisions, together with an informed client, about the design of each individual and unique project” (Stichler & Hamilton, 2008). This process is an informed approach to design where decisions are based on quantitative and qualitative research (Nussbaumer, 2009).

Chester Dean Director of the Institute for Health + Wellness Design, University of Kansas, School of Architecture and Design

Frank Zilm serves as the Chester Dean Lecturer on Healthcare Design in the School of Architecture Health and Wellness program. He teaches Architecture 731 and participates in studio design reviews, along with thesis and dissertation committees. Healthcare Design Magazine selected Frank as the top educator in 2013. He has worked within major health care architectural firms, teaching hospitals, and for the past thirty years has headed his own consulting firm where he has executed over 350 planning and programming studies. Frank is an active contributor to the health care community, authoring numerous papers, regularly teaching at the Harvard Graduate School of Design Executive Program. He has served as President of the American Institute of Architects Academy on Architecture for Health, and was a founding Fellow of the American College of Healthcare Architects.

Margaret Calkins is Executive Director of The Mayer-Rothschild Foundation, the only national philanthropy exclusively committed to person-centered long-term care in the US. She is also Board Chair, IDEAS Institute and former Elliot Professor in Health Care Design, Kent State University, College of Architecture and Environmental Design. Calkins is internationally recognized as a leader in the field of environments for elderly, especially those with Alzheimer’s and other dementias. After completing an A.B. in psychology at Kenyon College, she received her Masters and Ph.D. of Architecture at the University of Wisconsin- Milwaukee. Calkins has spent many years exploring the therapeutic potential of the environment–social and organizational as well as physical–particularly as it relates to older adults in need of support. She has conducted literature reviews and studies surrounding the environmental correlates of patient falls, a condition that has long been associated with an aging population. A member of several national organizations and panels which focus on issues of care for individuals living with dementia, she speaks frequently at conferences both here in the US and abroad. She has recently served on several design juries, which seek to identify state of the art facilities in both health care and long term care. She has published extensively, and her book Design for Dementia: Planning Environments for the Elderly and the Confused was the first comprehensive design guide for special care units. Most recently she developed a four- volume book set titled Creating Successful Dementia Care Settings. Calkins has served as Principal Investigator on grants from the National Institutes of Health. She is also Senior Fellow Emeritus of the Institute on Aging and Environment at the University of Wisconsin-Milwaukee.

Rosalyn Cama has been a practicing interior designer for over 30 years and has worked on numerous projects throughout the United States. A fellow of the American Society of Interior Designers (ASID), she served as ASID’s 24th President and has served as the chair of its Healthcare Specialty Network. She is Chair Emeritus of the board for The Center for Health Design. Rosalyn frequently writes and lectures on what she calls “Life Indoors,” which she sees as the intersection of health, the design of the built environment, and wellbeing. She has received many design and service awards during her storied career, including an Honorary Doctorate in Fine Arts from the New York School of Interior Design in 2014, the ASID Designer of Distinction Award in 2012, and The Center for Health Design’s Russ Coile Lifetime Achievement Award in 2015. Rosalyn authored Evidence-Based Healthcare Design (John Wiley & Sons, 2009). In 2015, Rosalyn founded the CAMA Collection to co-create the “Healing Touch Collection” with IOA Healthcare Furniture. The collection, which focuses on patient and family engagement, has won many prestigious awards. The CAMA Bed Chair, the first in the collection, received a “Best of Year Award” from Interior Design Magazine in 2015 as well as the 2016 “Best of Competition” Nightingale Award.

Director of Strategic Projects The Center for Health Design

A consultant to The Center for Health Design (CHD), Donna directs the continual development and growth of our Evidence-based Design Accreditation and Certification (EDAC) program. Her strategic oversight and industry experience helped propel EDAC to become widely accepted by top architectural firms throughout the country, and worldwide. She also directs and facilitates the Built Environment Network program, a collegial network of executives and industry leaders who participate in strategic discussions to help set the direction for the future of the built environment. Donna has more than three decades of healthcare leadership experience, including executive roles with Kaiser Permanente (KP). She was a key leader on the team responsible for one of the largest and most complex installations of software in the industry and co- authored the chapter on “implementation” in the book “Connected for Health.” Donna has her bachelor’s degree in nursing from the University of Northern Colorado, and master’s degree in public and health administration from University of Colorado.