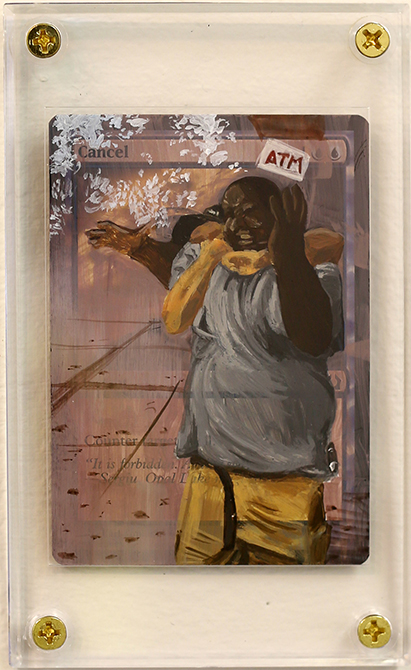 More than 100 artists are participating in the Hands Up, Don’t Shoot: Artists Respond exhibition October 17–December 20, 2014, in St. Louis City and St. Louis County, Missouri. Fourteen venues, including the Ferguson Municipal Public Library, opened the exhibition on Friday, October 17. Each venue is exhibiting 8–15 artworks from the exhibition.

Presented by the Alliance of Black Art Galleries, a St. Louis organization founded in 2013, Hands Up, Don’t Shoot: Artists Respond documents the August 9, 2014, killing of 18-year-old Michael Brown Jr. by a Ferguson, Missouri, police officer and its aftermath. Conflicting witness accounts relate the unarmed black youth having his hands up as he was being shot. The killing spawned nationwide protests and has led to reviews of law enforcement procedures nationwide. The iconic phrase, “hands up, don’t shoot,” became a national mantra for a new age of protest and the namesake for this exhibition.

LSU School of Art instructor and alumnus Jonathan Mayers work, Cancel (2014; acrylic on Magic: The GatheringTM card; 5.125″ x 3.125″ x .25″) was chosen to be included in this exhibit. The image depicts Eric Garner of Staten Island, New York, during the moment he was placed in an illegal chokehold by a police officer. He was allegedly selling “loosie” cigarettes illegally on the streets when he was confronted. Sadly, Mr. Garner died in a hospital due to the injuries suffered during his restraint. “I hope this work helps to raise awareness and facilitate a positive change in communities in response to the recent shootings, including the role of law enforcement, social and racial prejudices, as well as the media reaction,” said Mayers.