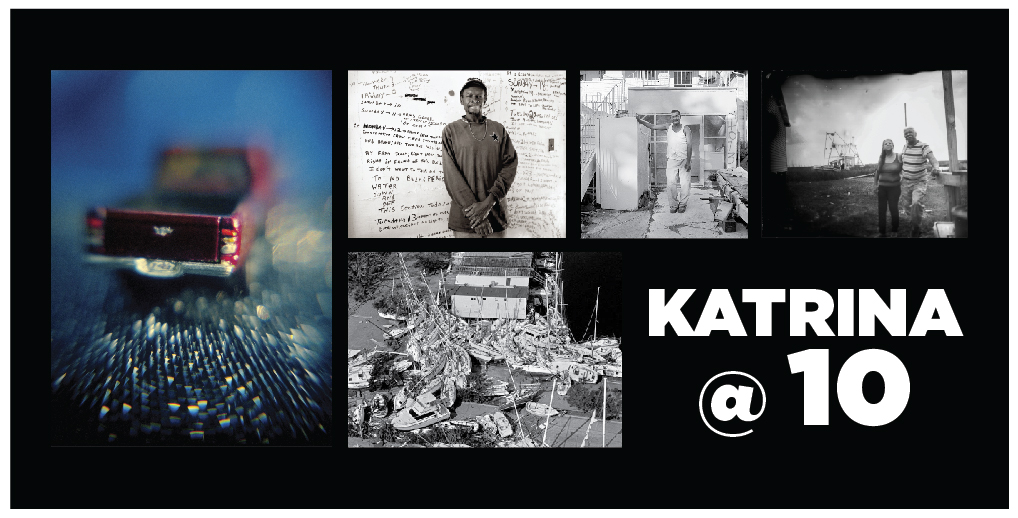 Ten years following the aftermath of Hurricane Katrina, five local photographers, Thomas Neff, Cate Colvin Sampson, Jennifer Shaw, David G. Spielman, and Jonathan Traviesa, come together to illustrate the impact of the storm through their photographs. Each photographer’s work reveals an inside look at the struggle and survival of Louisiana both during and after Hurricane Katrina and a glimpse into the stories and experiences of the people most affected by the storm. The exhibition will be on display in the Glassell Gallery in the Shaw Center for the Arts, August 27–October 4, 2015.

Thomas Neff is a professor emeritus of the LSU School of Art, where he taught photography for 33 years. His numerous bodies of work focus on people, place, and architecture in Italy, Ireland, Japan, Colorado, and Louisiana. His most popular published work is a series of portraits and written narratives of people in New Orleans—citizens who did not evacuate when Hurricane Katrina struck.

Cate Colvin Sampson is a historic process and documentary photographer based in New Orleans, Louisiana. Her work functions as a visual anthropology of life in the southeastern region of the state, recording the cultural nuances of communities steeped in the history of place. Sampson primarily travels by boat to communities that are isolated, water-locked, and far from the protection of the levee system in order to document individuals leading subsistence lifestyles, and to compare these contemporary practices to the historic idea of homesteading in the South. Sampson is well versed in a variety of printing-out processes such as albumen and salt printing, and prefers to explore her indelible yet transient southern landscape by water, accompanied by medium and large format cameras, and her own handmade gelatin bromide glass plates, a process learned from historic process specialists while at George Eastman House International Museum of Photography and Film. In May 2014 Sampson co-curated the Louisiana Culture Exhibition, an international photography installation representing contemporary views of southern culture, in Moscow, Russia, at the Multimedia Art Museum – Moscow House of Photography. Sampson is the 2015 grant recipient of the Michael P. Smith Fund for Documentary Photography, issued by the New Orleans Photo Alliance.

Jennifer Shaw is a fine arts photographer based in New Orleans. Her photographs have been featured in B&W, American Photo, Shots, Light Leaks, the Sun, and Oxford American magazines as well as online publications including NPR, Fraction, One One Thousand, and Lenscratch. Her first monograph, Hurricane Story (Chin Music Press), was named a best photo book of 2011 by photo-eye and Brain Pickings. North Light Press published her second monograph, Nature/Nurture, in 2012. Shaw’s work is exhibited widely and held in collections including the New Orleans Museum of Art, the Ogden Museum of Southern Art, and the Museum of Fine Arts Houston.

David G. Spielman has been a working freelance photographer for well over 25 years. Personal work and assignments have taken him to six of the seven continents. He has published four major books on differing subjects, such as Southern writers and musicians, and two books on and about Hurricane Katrina. His work is diverse and his goal is to render images that are truthful and represent what he sees. He lives in New Orleans with his wife and son.

Jonathan Traviesa is a photographer and artist who has lived in New Orleans since the late 1990s. He has had numerous solo and group exhibitions in New Orleans, Philadelphia, Chicago, and New York. In 2005, the Times Picayune voted his Katrina photo-sign installation as best art show of the year. Traviesa taught Photoshop at NOAFA from 2005-2010. He is a founding member of The Front gallery and released his first book, Portraits, with a concurrent exhibition at The Front during October and November of 2009. As part of Photonola, Traviesa received the New Orleans Photo Alliance’s inaugural Michael P. Smith Grant Award, and the Ogden Museum of Southern Art exhibited a selection of his portraits from the book. His most recent solo shows, Beacons Abound and Kinda~Deathy, opened in April 2011 and January 2012 at The Front, respectively. In 2012, he was commissioned by the Contemporary Arts Center to make a site-specific mural installation of one of his photographs, and, while currently pursuing an MFA at Tulane, he is making more site-specific photo installations that incorporate additional framed elements. His work is collected privately around the United States and publicly in New Orleans by the Ogden and the New Orleans Museum of Art.