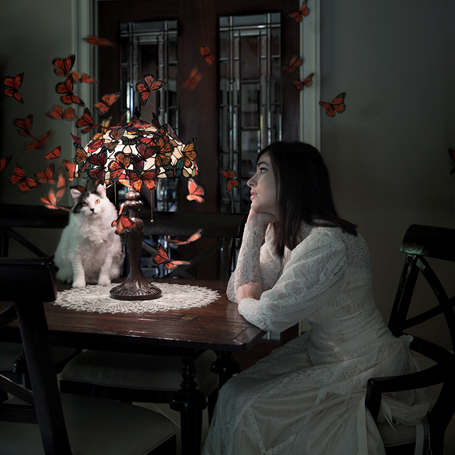 Randi Willett, MFA photography candidate in the LSU School of Art, will present her thesis exhibition, A Particular Pardigm of Perpetual Parallax, at the Glassell Gallery December 12, 2015, through January 8, 2016. A reception will be held from 6 to 8 p.m. on December 12.

“However, a strange series of events has since resulted in her mysteriously disappearing from her home along with her four cats, a trunk of very old dresses, and a camera. No one has found evidence of where she has spirited away to, but there is no suspected foul play or an otherwise noted paralleling paradigm. She has simply vanished from her home and has not been seen subsequently, albeit the rare instance of spotting her in an undisclosed pet supply store purchasing large quantities of canned cat food. It is suspected that these sightings might be her identical twin sister though this is still unclear. Sources have yet to be confirmed. Her last known communications with anyone were the hastily scribbled words on a piece of paper pinned to her front door reading:

(The truth will set you free. What is truth?)”

Reality estranges as an encumbrance, a cage that traps with its clipped wings, layered veils, and stiff blankets. This hold subsists as an immovable vessel potted but never earthbound—mounted in a strained compartment, like jars with tight lids, lacking: in air, in breath, in imaginary attributes. Finally, with a last breath, an emergence blooms upon that which contextualizes momentary “reality” or rather that which defines a metaphorical escape from . . . actuality.

My singular endeavor is to escape.

My momentary escape is found in the illusory.

My illusion is but a perception and with perception I beckon escape . . .

With this work, I want to shift the ever changing, kaleidoscope imagery of what is seen and what was seen. In which our initial perception reads differently when we fit together varying fragments of a photograph. How we look for not what is reality, but that which we have been primed to look for as something false. Surrounded by enigmatic narratives, the works reveal two sides of peripetria moments. Interrupting these works as fictions or to create a notion of fantasy that is read as purely theater reveals that escape is inevitable regardless of circumstance, but in which way we meet with it is veiled in darkness.

May all those who proceed ahead become a player in the works in their own accord?