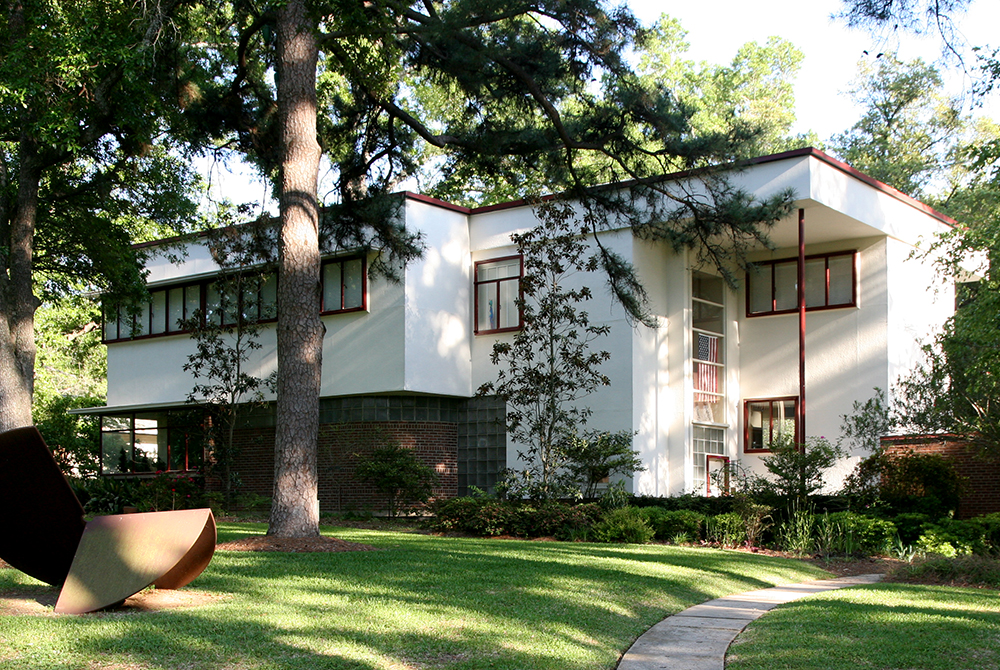 *Note location has moved from the LSU Design Building to the LSU Hilltop Arboretum due to the sudden venue change of LSU’s weekend football game from South Carolina to Tiger Stadium.

“Modernism in Louisiana” coincides with The Landscape Architecture Legacy of Dan Kiley, a traveling photographic exhibition produced by The Cultural Landscape Foundation (tclf.org), celebrating the life and career of one of the most important and influential modernist landscape architects of the 20th century, on view at the LSU Student Union Art Gallery October 9–December 16, 2015.

The symposium explores the modern movement of architecture and landscape architecture in Louisiana and includes presentations on the following topics:

The symposium and exhibition at LSU were organized by Lake Douglas, PhD, ASLA, associate professor of landscape architecture and associate dean for research & development at the LSU College of Art & Design.

“Modernism in Louisiana” is free and open to the public; however space is limited so registration is required. To register, fill out the online form here or call Lake Douglas at 225-578-9222. Professionals will sign-in to receive continuing education credits.

Karen Kingsley, PhD, is professor emerita of Tulane University’s School of Architecture, where she taught architectural history for 25 years. Since 2005 she has served as editor-in-chief and managing editor of the Society of Architectural Historians’ Buildings of the United States series (University of Virginia Press), and she is co-editor of the society’s digital publication, SAH Archipedia. She has published widely on American architecture, including Buildings of Louisiana (Oxford University Press, 2003) and is the editor of and a contributor to the architecture section of the Louisiana Endowment for the Humanities’ on-line encyclopedia, KnowLA. Kingsley also writes the architectural history column for LEH’s quarterly magazine Cultural Vistas. Her book (co-authored with Guy Carwile), The Modernist Architecture of Samuel G. and William B. Wiener, will be published by LSU Press in spring 2016.

Michael Desmond, PhD, is a professor of architecture at LSU. Desmond received a Bachelor of Architecture from LSU, a Master of Architecture and Urban Design from the Harvard Graduate School of Design, and a PhD in history, theory, and criticism in architecture from the Massachusetts Institute of Technology. He received a Campus Heritage Grant from the Getty Foundation in Los Angeles to conduct an inventory and analysis of the historic LSU campus. This effort produced an architectural history highlighting the roles of the Olmsted brothers and Theodore Link; a technical report documenting external building    conditions; a large public exhibition that traveled the state throughout the university’s 150th anniversary in 2010; and the book, The Architecture of LSU, published by LSU Press in 2013. Desmond’s chapter, “The Architecture of Louisiana,” is included in The Pelican State, Wayne Parent (ed.), published by LSU Press in the fall of 2014.

Max Conrad, FASLA, professor at LSU’s Robert Reich School of Landscape Architecture, began college studying ornamental horticulture at California State Polytechnic College, Pomona. Considering a transfer to LSU to enter its horticulture program, Conrad met Dr. Robert S. Reich (”Doc”), thus beginning a lifelong personal and professional relationship. Doc discouraged Conrad from transferring into horticulture and instead quickly enrolled him in the landscape architecture program at LSU, then in its early stages. Conrad graduated in 1961 and began graduate study at Harvard’s Graduate School of Design, where he received his Master of Landscape Architecture in 1963. Following a brief experience at NASA in Huntsville, Conrad won the Charles Eliot Travelling Fellowship from Harvard’s landscape architecture school, a life-changing experience that enabled him to travel around the world for nine months months to experience urban design and great works of landscape architecture and architecture throughout Europe, the Middle East, and Asia. Shortly after returning, Doc recruited Conrad to teach as LSU, initially for only one semester, now extending into his sixth decade.

Andrew Ferrell is the chief of the Architecture and Engineering Program at the National Park Service’s National Center for Preservation Training and Technology (NCPPT) in Natchitoches, Louisiana, where he coordinates the center’s national training initiative for architects and engineers. His research interests include sustainability, disaster preparedness and response, and trades training. He joined NCPTT in 1999 and was previously Architecture and Engineering Research Fellow coordinating NCPTT’s training efforts for architects and engineers. Prior to joining NCPTT, Ferrell worked at Gulf Engineers and Consultants as a cultural resource management specialist and environmental resources technician and taught in the Cultural Resource Management Program at Southeastern Louisiana University. He holds a master’s in International Relations from Boston University–Brussels and a Master of Architecture/Historic Preservation from Louisiana State University.

John Stubbs is director of the Preservation Studies Program and Favrot Senior Professor of Practice at Tulane University’s School of Architecture. A native of Louisiana, he holds BS in Construction Technology from LSU (1972) and an MS in Historic Preservation from Columbia University (1974). His field experiences began in the 1970s working as a surveyor on archaeological excavations in Italy and Egypt. In 1978, he worked as for the Technical Preservation Services Division of the Department of the Interior in Washington, D.C., administering federal tax incentives for rehabilitating historic buildings. From 1989–2009, he served as an adjunct associate professor of historic preservation in Columbia University’s graduate program in architecture, planning, and preservation, teaching theory and practice of architectural preservation and history of classical architecture. From 1990–2011, he served as vice president for field projects at the World Monuments Fund in New York, where he directed scores of the organization’s projects across the world. He later went on to serve as assistant director of historic preservation projects at Beyer Blinder Belle in New York for 10 years and as a trustee of the Archaeological Institute of America. He is a founding board member of the James Marston Fitch Charitable Foundation to which he was also named its chairman in 2008. He has lectured widely throughout his career and published extensively on architectural and cultural preservation issues.