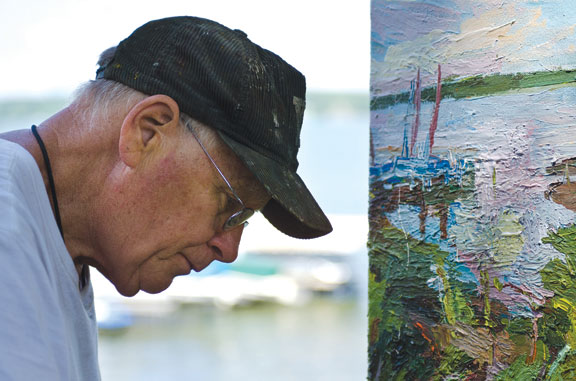 Stanley Lewis, painter, will present a Paula G. Manship Endowed Lecture at the LSU College of Art & Design at 5 p.m. on Wednesday, March 14, 2018, in the LSU Design Building Auditorium (room 103).

Stanley Lewis’s observational paintings and drawings depict the small-town middle-class world familiar to readers of John Updike’s fiction. In most of the work, people are not included, but human presence is felt in such things as lawn furniture.

Lewis graduated from Wesleyan University in Middletown, Connecticut in 1963 with a joint major in music and art. He received a Danforth Fellowship for graduate study and received an MFA from Yale University in 1967. He began teaching at the Kansas City Art Institute in 1969 in the painting department, working under Wilbur Niewald for 17 years. He joined the Bowery Gallery in NYC in 1986.

He taught at Smith College from 1986-1990 and then at American University from 1990-2002 working under department chairman Don Kimes. He retired from AU in 2002. He has taught summers at the Chautauqua Institution’s School of Art since 1996 and was on the faculty at the New York Studio School until the end of 2011. He was a long-time member of the Bowery Gallery, and also represented by Lohin Geduld Gallery. In 2007 he had a major retrospective at the Museum in the Katzen Art Center, American University, Washington, DC. In 2005, he received a Guggenheim Fellowship. He has been elected to membership in the National Academy. He is represented by Betty Cunningham Gallery in New York.