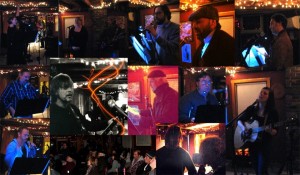 Communications across the Curriculum Studio Coordinator Vincent A. Cellucci spends the majority of his time teaching students in the College of Art + Design valuable writing skills for class assignments, professional portfolios, and future careers. Recently, the college granted him the opportunity to collaborate with writing professionals on a national scale.  Cellucci attended the 2013 Association of Writers & Writing Programs Conference held in Boston, Massachusetts. In addition to attending conference proceedings, Cellucci was a featured reader at two well-attended events, furthering LSU’s prominence during the nation’s largest gathering of authors, teachers, writing programs, literary centers, and presses; more than 11,000 writers participated in hundreds of readings, lectures, panel discussions, and signings.

Cellucci’s first event at the Worthen Attic on March 7, 2013, was a showcase of poets, musicians, and performing artists representing the Merrimack Valley and the Mississippi Delta in downtown Lowell, Mass. More than 50 souls braved a blizzard to hear Cellucci and two other poets, Brock Guthrie of University of Alabama and Christopher Shipman of Arkansas, embark on a collaboration with local talents, including musician David Amram (who has worked with legends such as Miles Davis, Thelonious Monk, Kerouac, Hughes, Hunter S. Thompson, and visual artists such as de Kooning and Pollock) and performance artist Dei Xhrist.

Returning to Boston by rail, Cellucci hosted a second reading on Saturday, March 9. Officially an off-site AWP event, Cellucci’s poetry reading brought together an audience and 20 of the 50 poets from across the nation whom he bound together in a contemporary poetry anthology released by Lavender Ink (New Orleans) in 2012. When asked how attending the conference will affect his teaching, Cellucci stated, “The more I learn and experience, the more I realize writing is communal; it takes teams (peers, editors, publishers, designers) and process to create worthy writing; that’s something I want to impart to our students.”