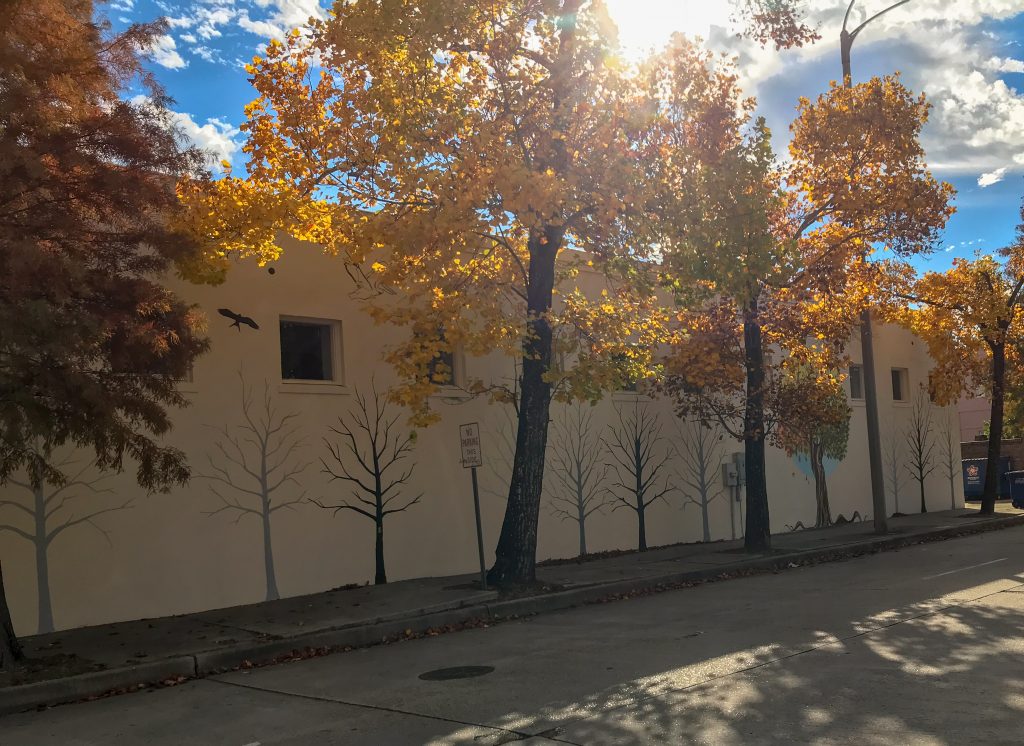 New Orleans-born MLA candidate Taylor Jacobsen chose to pursue landscape architecture in hopes of designing cities. So when he had the opportunity to participate in a beautification project in downtown Baton Rouge, it was a chance to improve the city that he currently calls home. Taylor recently started a small design firm called New Land Development, embarking on a number of projects to benefit the local community.

“I am lucky to live in downtown Baton Rouge, therefore calling the heart of the city my neighborhood, so naturally I find it easy to help my neighbors and citizens build a better environment,” he said. “If you walk your neighborhood enough times, you will find ways it can improve and hopefully you can connect with business owners or government agencies to fund these ideas.”

Jacobsen participated in an art installation, designing and painting a mural on a 2000 square foot wall on 6th and Main Street in downtown Baton Rouge, across from the restaurant Cocha. The restaurant owners Enrique Piñerua and Saskia Spanhoff had a vision for beauty on the city block, and the Arts Council of Greater Baton Rouge, the Downtown Development District, and the Rehabilitation Individuals through Strategic Encounters (RISE) program collaborated on the project.

The goal of the project is to beautify urban streets to drive more pedestrian traffic downtown, and benefit the local economy. “We called this theme, ‘From tradition to transformation,’ a statement that spoke to the idea of fighting older designs and renovating spaces to fit the needs of citizens in the 21st century,” Jacobsen said.

RISE participants – ex-offenders in a re-entry program – and a group of volunteers worked together to paint the wall white, creating the blank canvas for the mural. The project brought together a group of diverse people working together to beautify downtown Baton Rouge and give ex-offenders a chance to do something good for the community. 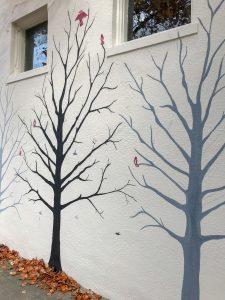 The mural depicts trees, with a series of shadows of branches that blend seamlessly into the landscape of the tree-lined city street. The scene marries art and nature, cleverly integrating the painted trees with the real ones. To soften the small space, Jacobsen implemented negative space painting techniques to trick the eye into creating more space and depth.

He placed native animals throughout the wall, ranging from small lizards to large birds, all flocking to the “tree of life” painted on the wall. The tree of life reflects the changing seasons, representing both a connection to nature and the nearby restaurant; essentially, the local community.

When sitting in the restaurant window across the street, as the sun slips down over the horizon and the light dims to the dusky hues of twilight, the real shadows of the live trees blend along with the painted shades, forming a tapestry on the wall.

Building relationships in the local community had made these projects possible. “I have been lucky to be good friends with amazing people who support local designers and artists,” Jacobsen said, siting project support from Renee Chatelin at the Arts Council of Greater Baton Rouge.

With a new wave of citizens moving back to a city’s center or urban landscape, our attention to redefining and redesigning the space must be at the forefront of our minds. We need to rethink how we use our urban space in order to design new pieces that fit our current demands and even future needs. 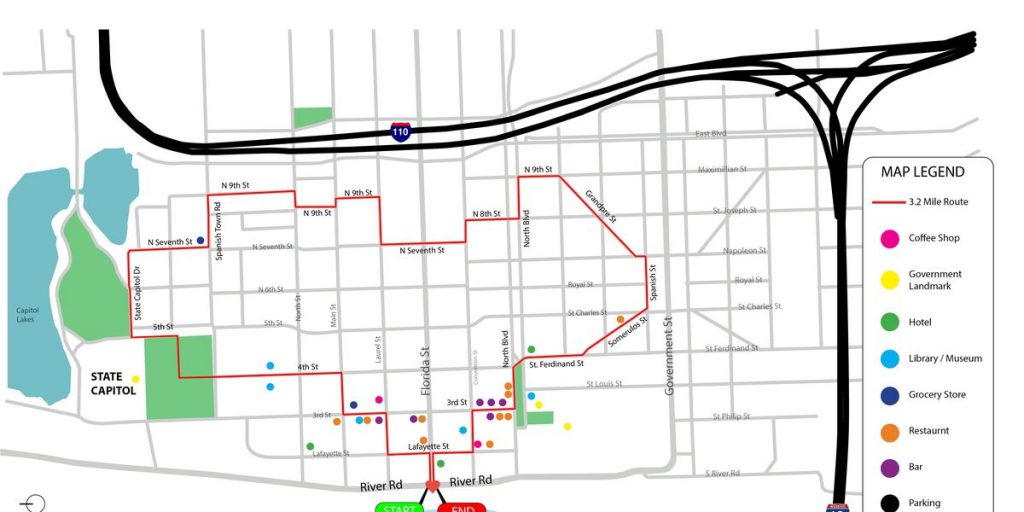 Jacobsen also designed an urban trail to improve the health and wellbeing of local residents. The Heart Trail is a 5K walking/running trail throughout downtown Baton Rouge, developed to “encourage people to embrace the importance of a heart-healthy lifestyle, get out in their city, and experience art in unexpected ways.”

The 2019 Ebb and Flow Festival held in April 2019 hosted a walking tour of the heart trail, in which attendees enjoyed art popups and performances set up along the path. The annual public art event aims to spur economic activity in the region through cultural tourism, and increase community engagement through arts and education, according to the Arts Council of Greater Baton Rouge.

His work reimagines not only Baton Rouge, but the state as a whole. Jacobsen’s MLA thesis project naturally focuses on designing for the landscape of Louisiana: “I am studying the idea of converting a collection of large river barges into the world’s first traveling park that have the ability to travel and connect to over 60 cities along the Mississippi River.”

“Landscape architects, by definition, reimagine the built environment,” said Mark Boyer, director of the Robert Reich School of Landscape Architecture. “The goal is to plan, and design for, the future.”

These are just a few examples of the downtown beautification project, which includes ongoing development of the city of Baton Rouge, adding newly designed spaces and businesses, and careful planning choices all intended to rejuvenate the area. The architects, landscape architects, and designers collaborating on various projects are working to change the character of Louisiana’s capitol city, and revitalize its urban character.