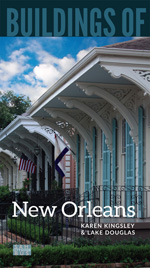 “New Orleans isn’t like other cities,” Stella tells her sister Blanche DuBois in Tennessee Williams’s A Streetcar Named Desire. Cradled in the crescent of the Mississippi River and surrounded by water, the city has faced numerous challenges since its founding as a French colonial outpost in 1718. The architecture of New Orleans is fascinating, steeped in a rich history filled with diverse influences.

Lake Douglas, associate dean of research and development in the LSU College of Art + Design and professor of landscape architecture in the Robert Reich School of Landscape Architecture, coauthored Buildings of New Orleans, published by the University of Virginia Press in April 2018. The book, co-written by Karen Kingsley, Professor Emerita, Tulane University, is “a handy insider’s guidebook to the unique built and natural environments of one of America’s most interesting places.”

Buildings of New Orleans is a detailed guidebook to New Orleans architecture—an authoritative, comprehensive, post–Hurricane Katrina overview of buildings, neighborhoods, and landscapes—tells a compelling and fascinating story of the city through concise descriptions of nearly 300 significant structures, open spaces, and lesser-known places, enhanced by 175 photographs and 23 maps.

Conveniently organized into thirteen neighborhood tours, two road trips into nearby parishes, and three excursions up and down the Mississippi River along the historic Great River Road, and enlivened by sidebars highlighting everything from renowned authors, cuisine, and jazz to public markets, green spaces, and historic preservation, this insider’s guide to New Orleans “will appeal to all who are interested in the history of one of America’s most interesting cities,” according to the University of Virginia Press.

“This book takes into account not only the historical architecture of the city, but also the unique landscape architecture of New Orleans,” said Douglas, who is a fellow of the American Society of Landscape Architects and an expert in American cultural landscape history. 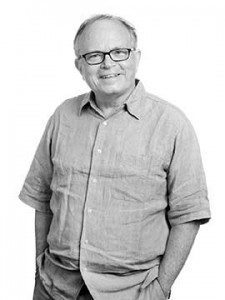 Douglas is the author of a number of books, including Public Spaces, Private Gardens: A History of Designed Landscapes in New Orleans (LSU Press, 2011) and he has published extensively in academic journals, popular magazines, books and professional publications in America, Europe and Asia, most often with a focus on the intersection of landscape architecture and other disciplines. His expertise in landscape history has a particular focus on 19th-century agriculture, horticulture and gardening.

Kingsley is Editor-in-Chief of the Buildings of the United States series, and co-editor of the Society’s digital publication, SAH Archipedia. She has published widely on Southern architecture, including Buildings of Louisiana (Oxford University Press, 2003) and The Modernist Architecture of Samuel G. and William B. Wiener: Shreveport, Louisiana, 1920-1960, co-authored with Guy W. Carwile (LSU Press, 2016).

Douglas will give a book talk at Hill Memorial Library on Wednesday, April 4. Event information.