Skip to content
COLLEGE OF ART & DESIGN Home / Who We Are / Retired Faculty/Emeritus / Burke, James 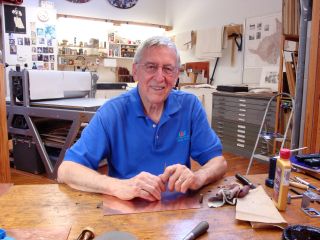 
James Burke is one of the most influential contemporary arts figures in South Louisiana and is a professor emeritus of the LSU School of Art, where he taught intaglio printmaking for 31 years.

Burke was a founding member of Unity 8 Gallery, which went on to become Baton Rouge Gallery center for contemporary art in 1966. Burke has exhibited his prints extensively in local and national exhibitions. His work is in many private collections and museums, including the New Orleans Museum of Art; the LSU Museum of Art; the Mint Museum of Art in Charlotte, North Carolina; the Wichita Art Association; the Delgado Museum of Art in New Orleans; the Dulin Galleries in Knoxville, Tennessee; and New York University at Potsdam.

Recently, in 2013, the Galería de Arte Guillermo Nunez at the Casa de la Cultura Anselmo Cadiz in Chile presented a retrospective exhibition of prints from Burke’s five decades of work. The exhibition, A Life Recorded: 50 Years of James Burke, represented the completion of a significant circle for Burke, as his mentor was the Argentine writer and master printmaker Mauricio Lasansky. Currently, Burke is leading a workshop on mentorship in printmaking at the Grand Marais Art Colony in Minnesota, August 18–22, 2014.