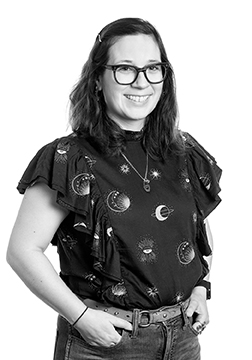 
Lauren Cardenás is a Latinx studio artist who focuses on print media. Her current body of work asks the viewer to question the connotations of everyday mundane objects. She is investigating her bifurcated Mexican American identity as a subject matter.

Cardenás holds a BA in painting, printmaking and drawing from Southwestern University in Georgetown, TX, she is a Tamarind Institute Printer Training Program graduate, and holds an MFA in visual art with a focus in print media from Washington University in St. Louis. Her artwork has been exhibited nationally and internationally. She was awarded the University of Nevada, Reno Black Rock Press Redfield Fellowship (2016-2018). She created a limited edition artist book titled “Things You See in the Dark,” which is a collaboration with poet Daniel Enrique Perez.

She was the editor and founder of PIECRUST Magazine (2011-2014), which was an art and biannual literary magazine based out of St. Louis. Lauren also was a co-founding member and co-director of Museum Blue (2014-2017), an artist-run project space in St. Louis. She has co-curated many exhibitions that make strides to bridge the gap between art and literature. Along with her curatorial and publishing practice, she was a founding member and an active part of the steering committee of the St. Louis Small Press Expo (2014-2016). She was a Gallery Committee member for the Holland Project in Reno, NV (2017-2018).