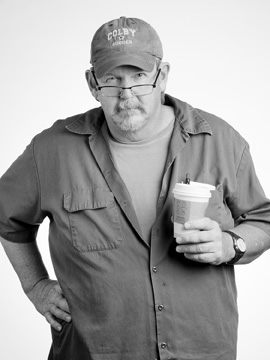 
Ed Smith is a professor of painting and drawing at Louisiana State University. Smith was born in Naples, Italy. He received his BFA in painting from the University of Massachusetts at Amherst and his MFA in painting from Brooklyn College at the City University of New York. After working at Queens College in New York for 10 years, Smith came to teach at LSU, where he became fascinated by the Louisiana landscape. He was also interested in the work of John James Audubon and intrigued by the intersection of wildlife and industry in South Louisiana. His paintings are about the clash that occurs where nature and man collide. In 1979, Smith was an original crew member of the Sea Shepherd Conservation Society. Environmental concerns have played an important role in his work ever since. Smith’s work has been exhibited at Dartmouth College in Hanover, New Hampshire; Islip Museum in New York; North Carolina Museum of Natural History in Raleigh; Huntsville Museum in Alabama; Walter Anderson Museum in Ocean Springs, Mississippi; Contemporary Art Center in Mobile, Alabama; Redbud Gallery in Houston, Texas; Dome Gallery in New York; Sylvia Schmidt Gallery in New Orleans; Clark Gallery in Southampton, New York; and Whitney Art Works in Portland, Maine, among others. He has had solo exhibitions at Cape Cod Museum of Art in Massachusetts and the Appleton Museum of Art in Ocala, Florida. He is currently represented by Soren Christiansen Gallery in New Orleans and Erdreich White Fine Art in Boston.

View his work at: