Janice Rubenstein Sachse (1908–98) has been named the first “Louisiana Treasure” by the LSU School of Art. Initiated by the LSU School of Art to bring recognition to Louisiana’s heritage and the impact of LSU as an educational institution, the Louisiana Treasures program recognizes LSU educated artists who have had significant impact on a local, national, and/or international level. 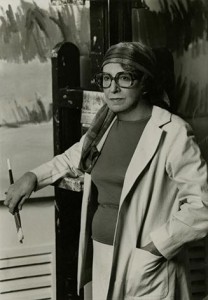 Artists featured in the Louisiana Treasures series have created works with deep connections to the landscapes and people of Louisiana, works that help preserve the state’s cultural heritage. The Louisiana Treasures program honors inductees as artists in their own right and as important and key historical figures, timeless “treasures” to be remembered, and studied, by future generations of artists and designers.

Raised in Baton Rouge, Janice Rubenstein Sachse created artwork that reflected the social conditions of Louisiana during the mid-twentieth century. She studied art at LSU and Sophie Newcomb College. In 1925 at the LSU Art Department, she began working with the renowned muralist Conrad Albrizio, who encouraged her to explore and experiment, an attitude that Sachse retained throughout her 70-year painting career. Although she did not adhere to any one technique or subject matter, Sachse most often painted the people and places of Louisiana, even traveling along the state’s newly built interstate in the early 1970s to create a series of paintings that detailed Louisiana’s landscape. She exhibited widely in Louisiana and was represented by Helen Seger’s La Boetie Gallery on New York’s Upper East Side. In 1999, a year after her death, the Janice R. Sachse Visiting Artist Series (now the Janice R. Sachse School of Art Support Fund) was endowed and established at LSU in her honor.

In honor of Sachse being named a Louisiana Treasure, the LSU School of Art organized an exhibition of her work, Janice Sachse: A Retrospective, on view at the Alfred C. Glassell Jr. Exhibition Gallery at the Shaw Center for the Arts from March 29 through April 17, 2016.

“The exhibition has brought to light aspects of family and community that we value in South Louisiana,” stated Rod Parker, director of the LSU School of Art.

The LSU Graphic Design Student Office designed a book by the same name, which can be viewed online at isuuu.com/lsufoundation/docs/janice_sachse_catalogue. Darius Spieth, professor of art history at LSU, and Glauco Adorno, an MA in Art History candidate at LSU, wrote essays for the book and helped track down works for the book and exhibition, and Randi Willett, who graduated with an MFA in photography in December 2015, photographed much of Sachse’s works for the publication.

“The energy and creativity released by transformational classroom interactions between faculty and students, the same that propelled Sachse’s career as an artist, is still very much a part of our lives. The sense of community, the support for innovation and creative ambition, is such an everyday affair that we can easily take it for granted,” wrote Parker in the introduction to Janice Sachse: A Retrospective.

“I know I speak for our entire family when I say we are enormously grateful to LSU, and especially to Rod Parker and his team, for putting together this book and organizing the exhibition of my mother’s work,” stated Harry R. Sachse, Janice Sachse’s son.

For more information about Janice Sachse, her work, and the Louisiana Treasures program, visit louisianatreasures.lsu.edu.