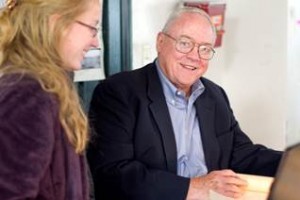 Ken Carpenter, professor of architecture and former dean of the College of Art & Design, is the recipient of a 2013 College of Art + Design Honor Award. The annual award is given to those who have had a substantial impact on the college.

During his time at LSU, Carpenter, a member of Phi Kappa Phi, the American Institute of Architects, and the American Association of University Professors, served as a Faculty Athletic Representative for the NCAA and the SEC and was chair of the Athletic Council for five years. He chaired search committees to hire deans for the E.J. Ourso College of Business and the College of Arts & Sciences, as well as a director for the LSU Museum of Art. He was a member of the State Architectural Selection Board, the East Baton Rouge Parish School Board Citizen’s Committee, the Baton Rouge Junior League Advisory Board, the Mayor’s Community Cultural Initiative, the Baton Rouge Lakes Commission, and the steering committee for the Baton Rouge Comprehensive Land Use and Development Plan (Horizon Plan), and he served for two years as president of the Board of Trustees of the Louisiana Arts and Science Center, now called the Louisiana Arts and Science Museum.

Carpenter’s research included being primary investigator of “The Dialogues of Architecture,” (funded at $180,000) and co-primary investigator of the “Image Resource Network (funded at $200,000) and “Visual Information Network” (funded at $196,731). His work on the College Visual Resource Library digitized 150,000 slides from architecture, interior design, and landscape architecture collections as well as the art history collection. Carpenter’s grant also facilitated a move of the art history department from Foster Hall to the Design Building in order to join the other schools in the College, which Carpenter says, helped to build collegiality among the disciplines.

In addition to his administrative work, Carpenter’s passion for architecture inspired him to take photographs of built environments during his travels, and he often taught a fourth-year architectural photography class. Following his sabbatical in London, in 2001 the LASC exhibited 90 of his black-and-white photographs in a show called “British Character.” In 2008, after spending time in five small towns along the North Sea in Scotland, Carpenter put together a stunning exhibit at LSU of 41 of his color photographs. He produced a book by the same name to accompany the show.

Carpenter says his happiest moments at LSU included contributing to the friendly atmosphere among the faculty, staff, and students in the college as well as helping former Development Director Michael Robinson raise $150,000 for the Julian White Scholarship Fund, honoring the university’s first African American professor, who was also an architect.

“I enjoyed the job,” Carpenter says. “The budget restraints were always a challenge but we managed to make it work. We hired a lot of good people, lost a few, but managed to keep many of them.”

In his retirement, Carpenter plans to spend time with family at the 1930s house he and wife, Mary Alice, remodeled in Harbor Springs, Michigan, just blocks from the marina. He looks forward to sitting on the dock, taking photographs, and playing golf.