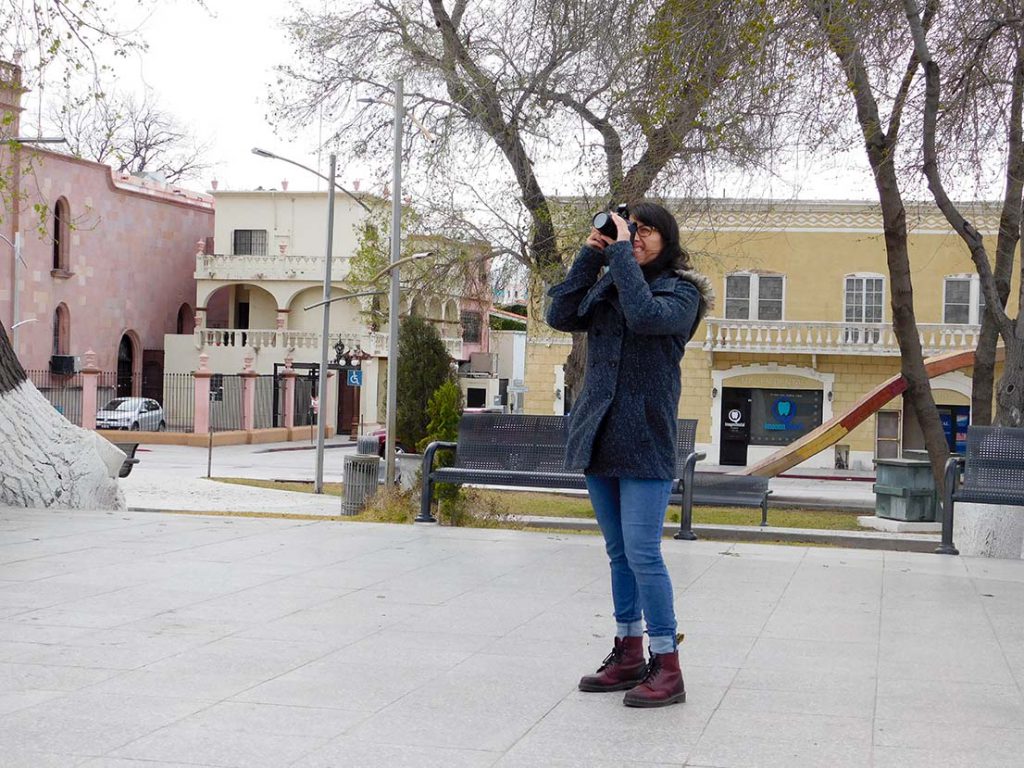 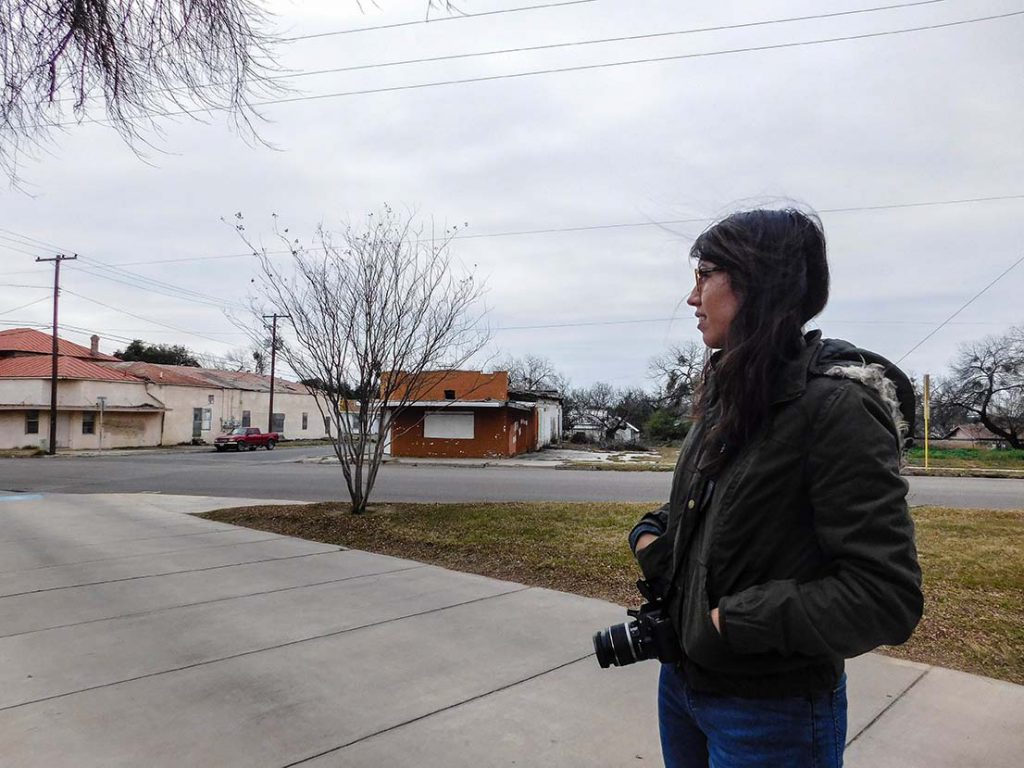 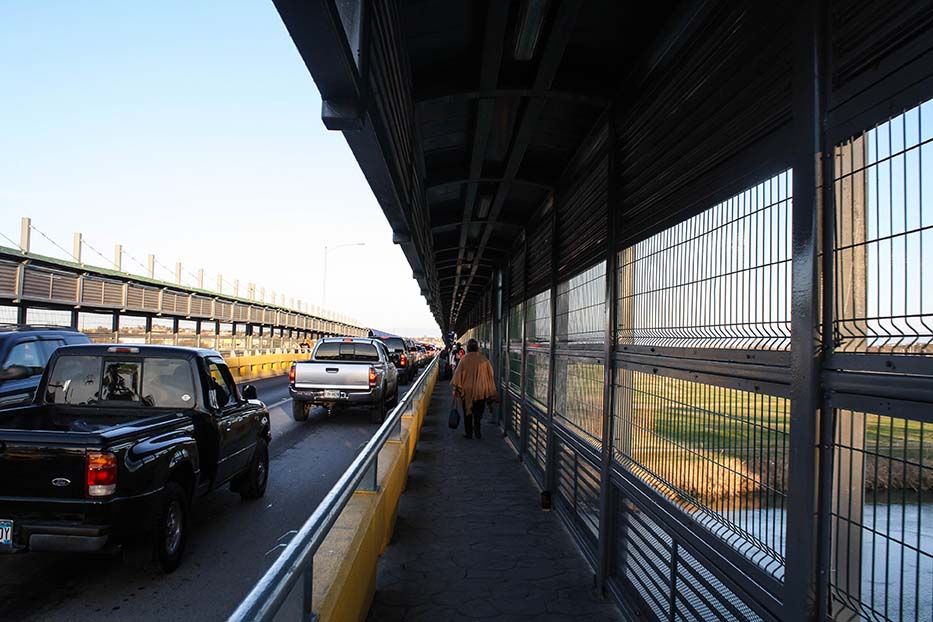 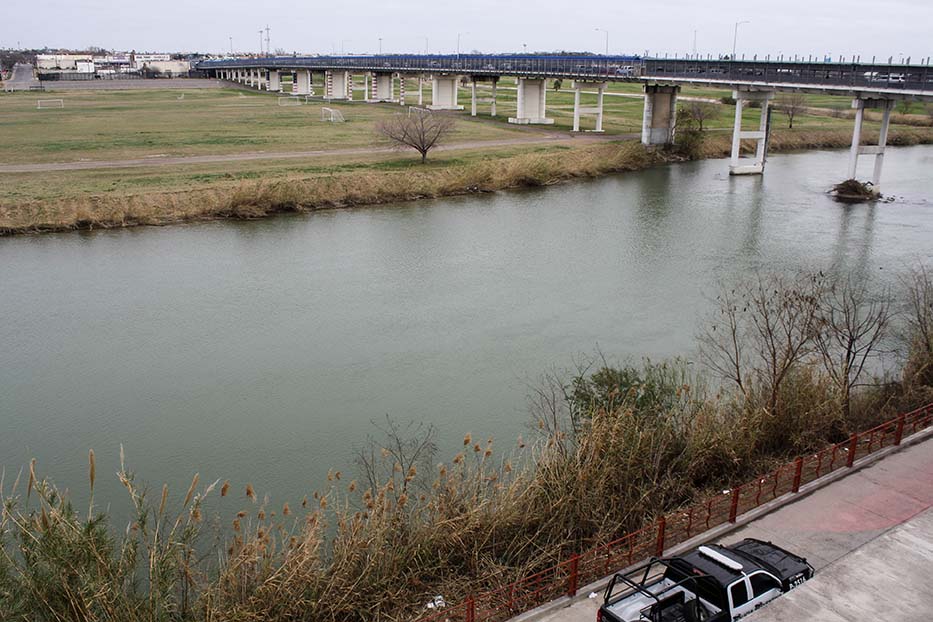 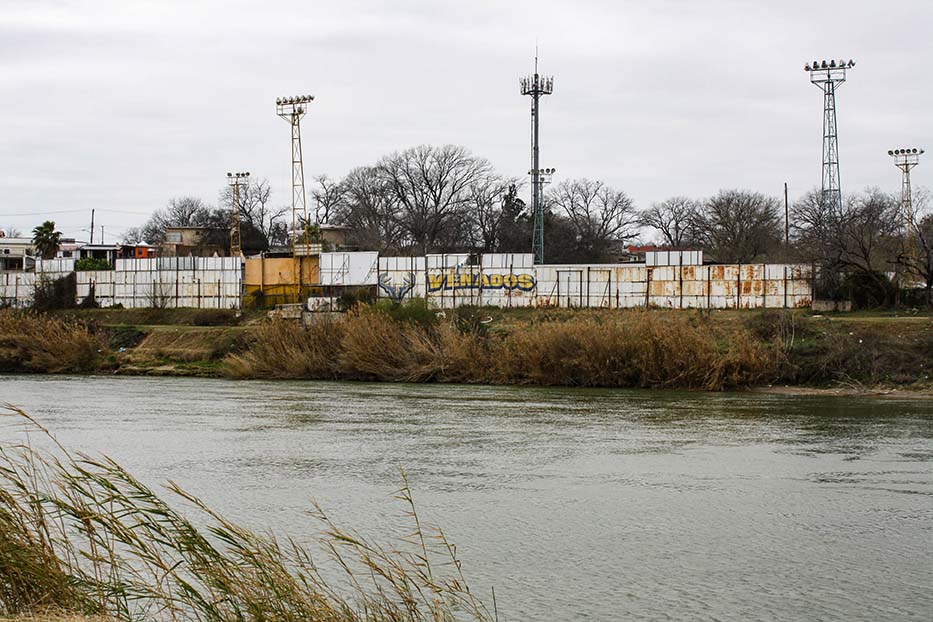 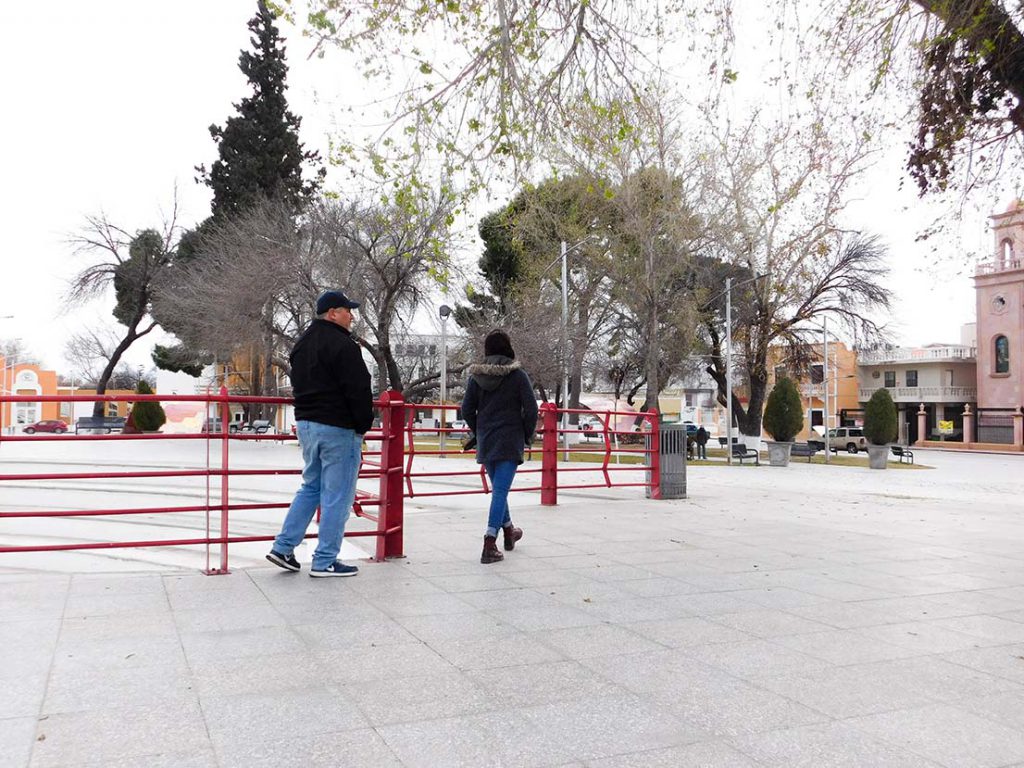 Anjelica Sifuentes, BLA 2018 candidate, won the 2017 Tipton Travel Award to support her travel for her Capstone research project “Redefining Our Borderlands.” The project investigates design concepts for alternative measures of border security between Mexico and the United States, informed by a social, cultural, and historical perspective. For the project Anjelica traveled to the border between the United States and Mexico, a crossing point in Eagle Pass, Texas – an area referred to as “the borderlands.”

Anjelica visited the Eagle Pass, Texas – Piedras Negras, Coahuila, Mexico site multiple times for her research. “Overall my trip experiences were extremely beneficial to my understanding of the circulation and environment of the U.S.-Mexico border,” she said.

“When Anjelica said she wanted to pursue this research topic, I said, ‘do it!’” said Bruce Sharky, professor of landscape architecture. “She is a dedicated student, and not afraid to take on big challenges. She takes into account the historical and cultural context of a very complex, enormous issue, and has come up with an alternative that makes sense for the community.”

The Wall: A False Sense of Security

The borderlands have been defined by the surrounding regional heritage and a barrier acts as an administrative division between the cultures of the United States and Mexico, according to her project. A wall on the U.S.-Mexico border is currently proposed by the U.S. executive government for security purposes. “However, it is serving as a statement that doesn’t represent what America aims to be,” Anjelica stated.

The aim of her research is to design a different border typology that is ethically, environmentally, and culturally responsible, “given the sensitivities of the issues today.” Anjelica explored a range of wall alternatives and improvements, taking into consideration the varying landscape conditions and anticipating design constraints due to the site’s physical limitations.

Anjelica’s research also took into account the contextual information that will inform the design of the border proposal, such as the cultural and societal evolution of border communities, historical context, urbanization growth trends, geographic makeup, economic trade, and migration. Her proposal cited precedent examples and incorporates security measures and cost analysis. Trips to visit the site firsthand allowed her to synthesize all these aspects, while also incorporating real-life considerations into her final project.

Why is This Important?

The border area is a unique ecosystem and community with cultural significance that deserves attention and appreciation, Anjelica stated. “There is a disconnect between American perception of what illegal immigration is versus what the realities of the issues are,” she said.

Her project explores the circulation and accessibility of the border and how that ultimately impacts the quality of life of both cities. “Putting myself in the position of someone who has to cross the border every day highlighted for me the importance of international fluidity for both societies.”

The trip experience produced interesting findings: while exploring the urban areas on either side of the border, she found a stark contrast between the evidence of economic growth in Mexico versus on the United States side, suggesting that the existence of the physical border barrier hinders socioeconomic communication between the two sides. Understanding the issues that face the communities along the U.S. border is important for urban planning and economic development.

“There is a long history of this divided singular culture of the cities established along the river, what is today the U.S.-Mexico border,” Professor Sharky explained. “What was once one interactive community was essentially split down the middle when the border was created.”

Kevin Risk, associate professor of landscape architecture, is the Capstone studio instructor and worked with Anjelica to develop the project. “Her research has taken on a more personal relevance over the course of the semester,” he said. “Instead of proposing alternative border wall typologies (where her research started), her project has become more about recognizing the daily and recurring cultural exchanges that have traditionally occurred between the border cities of Eagle Pass and Piedras Negras, Mexico, to which her family has historic ties, and designing more culturally rich, spatially sensitive and user-friendly approaches to the crossing experience. The end goal is to recognize that these cities share a common heritage, environment and ecology, and many resources, and that through thoughtful design and planning, borders can be places of unification rather than of divide.”

Anjelica has “lived it;” she understands all the particular cultural issues associated with the border region, Sharky said.

“The paternal side of my family is from, and still lives, in Eagle Pass so I thought I had a good grasp on what to expect returning and spending time crossing the international bridge,” Anjelica said. “With the objective to gain insight for my Capstone project, I was surprised at how different I had begun to perceive the area. Since I had been across this specific border before, I thought that my memories of crossing would be semi consistent with how I felt this time. But that wasn’t the case at all – this time I was in awe of how different each border city actually is.”

There are numerous services and amenities that the border towns share, and Anjelica had the chance to experience them firsthand as she walked across the international bridge and explored the area. “Looking across the Rio Grande from Piedras Negras really put my thoughts into perspective,” she said. “I stood in a Mexican city full of vibrant activity, while in comparison on the other side, the United States showcased its common neglect of border towns. It was really apparent that Piedras Negras takes better care and seems more proud of their city, unlike Eagle Pass, which has been pretty stagnant since I’ve known the area. The Mexican city has developed noticeably quicker than the U.S. city – I wasn’t expecting such a drastic contrast.”

The knowledge that she gained from her research trips shaped the direction that her project has taken, Anjelica said. “I am extremely grateful for the opportunity from Tipton Associates, which helped provide those experiences.”

Anjelica was awarded $1,750 to use for travel by the spring 2018 semester. Her application was selected from numerous submissions due to her innovative approach to her research project. She is the second student to win this annual award.

Tipton Associates is a Baton Rouge based architecture, interiors, and planning firm with a 130-year history of enhancing the quality of life for individuals and communities through its emphasis on excellent design.

“The vision for the travel award was to honor our tradition of interdisciplinary work,” said Lori Prochaska, AIA, senior associate and architect, Tipton Associates. “It is in this spirit we implore students from all of the disciplines in the LSU College of Art & Design to submit an application. Since its inception, we have been inspired by the exceptional students taking advantage of this opportunity and are grateful to be able to afford it to them.”

Led by LSU School of Architecture alumnus Ken Tipton, BArch 1981, the firm has an interdisciplinary focus; projects are about partnerships and working together with smart people to implement a shared vision. The 30 people in the Baton Rouge office approach assignments in collaborative, interdisciplinary teams that include specialists in architecture, interior design, urban planning, and landscape architecture.

“This project was a chance for Anjelica to give back to the community,” Sharky said.