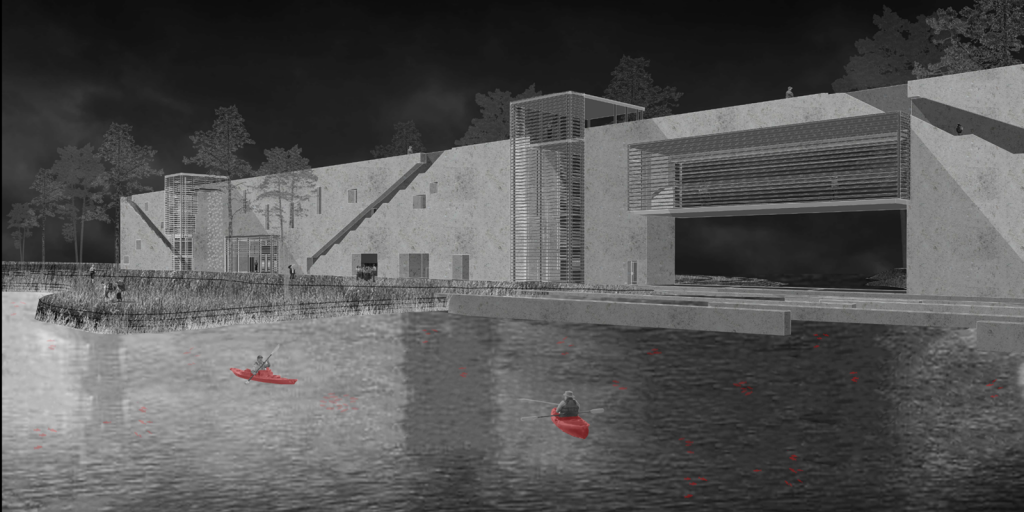 For the second year in a row, students from LSU School of Architecture’s fifth-year comprehensive design course have been awarded first place in an Association of Collegiate Schools of Architecture (ACSA) National Design Competition. The project titled The Parasite Lodge by BArch students Caroline Arbour, Anne Kellerman, Brooke Strevig, and Christopher Washington III, won first place in the Built2Last Resiliency in Design competition. Kris Palagi, assistant professor of architecture, was the faculty advisor.

Previously, Giovanni Coakley (BArch 2017), was selected as the winner in the WaterShed Urbanism category for the Designing Healthy Places competition.

The ACSA Built2Last Competition focused on “the opportunity to design an environmentally responsible Recreation Center that integrates a secondary purpose of post-disaster neighborhood support for community continuity through the inherent attributes of concrete applications,” according to the ACSA.

The Parasite Lodge is a recreational/disaster relief center set along the Amite River. Their work could not have been realized without the research and landscape design strategy provided by Andrew Wright in conjunction with the assistant professor Brendan Harmon’s landscape architecture Water Studio, The Hungry River, Palagi said.

This top winning project, The Parasite Lodge, is an inhabitable wall that is part of a larger infrastructure system. “The submission is conceptual on many different levels and scales. The submission is wonderfully drawn and presented with great restraint,” the juror comments said.

The Parasite Lodge siphons water away from the Amite River to perform as a mussel propagation center, according to the project description. The dual function of the Parasite Lodge as a disaster relief center and educational youth camp functions year-round in a singular shell, the retaining wall. The 400’ long concrete building can withstand strong hurricane winds and is designed to remain fully functional during a 100-year storm.

“Also performing as a year-round recreational lodge, secondary wall types and a green roof system attach to the larger mass creating areas of recreation and resiliency. Inside the 15-foot wide concrete form, voids are carved out to allow for passage, rest, and refuge within the wall. Apertures pierce through the thick concrete to allow for light and wind to comfort those residing in the wall. Traveling within the tunneled voids, users arrive at open spaces that are flooded with light and allow for visual access to the surrounding landscape previously hidden by the wall,” according to the project.

“I’m looking forward to a possible three-peat as I will be instructing this course again in the spring,” Palagi said.