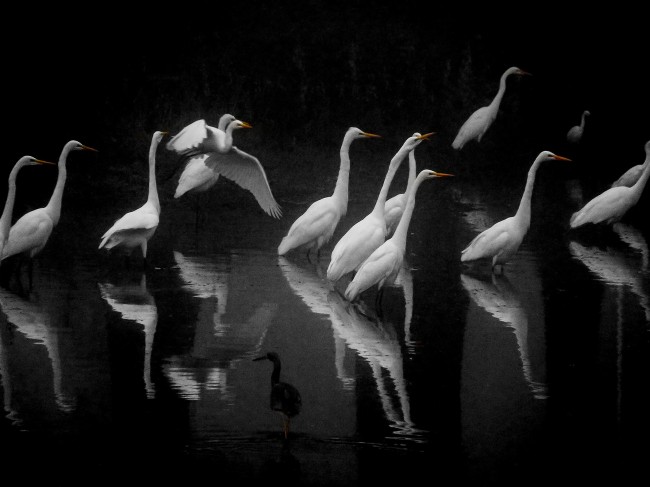 Mary Ann Caffery, adjunct instructor at the LSU School of Interior Design, is exhibiting her egret photographs at Baton Rouge Gallery, August 4–29, 2013, in a three-person show.

Caffery has been observing the migrating birds arriving at the LSU lakes in Baton Rouge each November for many years. Some years she documents the egrets’ presence in photographs and short movies, some years she simply watches. This year, Caffery also photographed the rookeries at Lafayette, Jefferson Island, and Avery Island, and she participated in a group expedition to visit and photograph the disappearing areas of the Louisiana coast.

The series of photographs included in the exhibition Vignettes: Out of the Darkness, Into the Light, is based on what Caffery observed during a winter walk around the LSU lakes one foggy morning. Caffery frequently walks around the lakes in winter, primarily to observe the pelicans’ strange feeding rituals. This particular morning, however, she stumbled onto a subplot of egrets in what she observed to be a surreal setting.

“It looked like an ancient, choreographed stage production in which the birds w

ere the actors, entering stage left, exiting stage right. They emerged from the fog and disappeared back into the fog as choruses of surrounding birds chanted. There was an element of mystery in what I saw. The scenes were so unusual that the photographs I took looked like paintings,” Caffery said.

Caffery’s goal as a photographer is to convey a grainy or fuzzy photographic atmosphere that portrays time standing still.

“Photographs portray a moment in time, and in this case they emphasize that heavy, veiled, mysterious atmosphere of an early morning. Some of the photographs in this series are about coming out of the darkness; some are about emerging into the light,” said Caffery.

Caffery works in a variety of mediums—glass, mosaic, paint, and photography—and light is the common thread throughout. Caffery took photography classes as a graduate student at LSU, and she has steadily practiced photography ever since. She initially took photographs as inspiration for her paintings and glass work. However, she has discovered that her photographs best portray the “stage drama of the family Egretta and their ancient rituals,” said Caffery.

For more information about the exhibit, visit batonrougegallery.org.

About Mary Ann Caffery
Mary Ann Caffery received a BS in chemistry from Centenary College of Louisiana and a MFA in studio art at Louisiana State University. Caffery is the owner of Caffery Gallery on Government Street in Baton Rouge and an adjunct instructor in the School of Interior Design at the LSU College of Art + Design, where she teaches courses in graphics and color theory. Caffery has studied with prominent designers and artists in the United States, France, Germany, and Canada. Her stained glass, mosaics, sculptures, and paintings are characterized by the use of spectral intensity color. Her work has been included in the Corning Museum’s annual New Glass Review and is owned by museums in Japan, Germany, and the United States. Her mosaic work can be seen in the New Orleans Louis Armstrong International Airport and the Lafayette Regional Airport in Louisiana. Caffery is a Baton Rouge Gallery Artist Member, and a member of the Baton Rouge Art League, the Society of American Mosaic Artists, the Louisiana Photographic Society, and Mid City Merchants Association, where she served as president 1999–2006. In 2012, Caffery received the Mary E. Moody Lifetime Achievement Medal from the Mid City Redevelopment Alliance.

About Baton Rouge Gallery
The Baton Rouge Gallery, Center for Contemporary Art is a non-profit contemporary art gallery, located at BREC’s historic City Park pavilion. One of the oldest professional artist cooperative galleries in the United States, the gallery was founded in downtown Baton Rouge in 1966 and relocated to the City Park location in 1984. The gallery offers contemporary art exhibitions, featuring professional, local, and national artists, and hosts special performances, a spoken word program, and special juried and invitational exhibitions. Monthly exhibitions feature the work of current artist members, including photographers, painters, sculptors, stained-glass artists, printmakers, ceramists, multi-media and installation artists. Opening receptions are held for each exhibition on the first Wednesday of every month from 7:00 to 9:00 p.m. and are free and open the public.

About LSU School of Interior Design
The LSU School of Interior Design program emphasizes creative problem solving, research and analysis, and graphic skills. Student activities are supported in the design studios, which form the core of the educational experience. Liberal arts, business, communication, and technical courses are required and complement the program’s strong emphasis on design. For more information, visit design.lsu.edu/interiordesign.