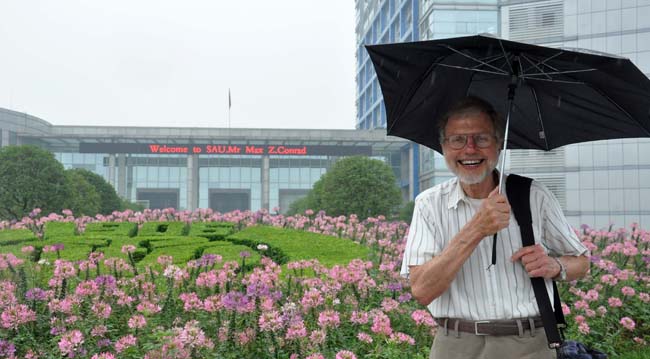 In June 2013, LSU Robert Reich School of Landscape Architecture Professor Max Conrad taught a studio course at the China Academy of Art in Hangzhou and lectured at Sichuan Agricultural University in Chengdu.

Conrad’s invitation to teach and lecture in China came about through visiting faculty from new universities in China who received research sponsorships and wished to observe the landscape architecture program at the LSU College of Art + Design. Professor Qingqing Yu initially invited Conrad to teach at the China Academy of Art, and Dr. Guoli invited Conrad to lecture at Sichuan Agricultural University in Chengdu.

Upon his arrival in Chengdu, Conrad was greeted with a bouquet of purple and gold flowers. When he arrived at Sichuan Agricultural University, he discovered his name lit up on a marquee and dozens of lecture posters featuring his picture were distributed across the campus. After his lecture on the development of contemporary landscape architecture, Conrad was presented with another, larger, bouquet of flowers. At dinner, numerous exotic dishes were served, and he was introduced first-hand to the sport of eating in China.

Conrad saw the famous giant pandas at Chengdu Panda Base and visited the Dujiangyan Irrigation System, the oldest ecological engineering project in the world, built in 256 BC. Conrad also served as “Max-ex” and hand-delivered a signed copy of the new cooperative agreement between LSU and SAU, put together by the LSU Sichuan Agricultural University Collaboration Committee.

In Hangzhou, Conrad learned why the region was classified as an UNESCO World Heritage Site in 2011. The picturesque city rests along the historic West Lake, known for being one of the most important sources of inspiration for Chinese garden designers. Conrad said, “The whole city is like living in a landscape. Even the thoroughfares are heavily planted for miles and miles. It feels like you are driving through a garden instead of along a highway.”

The new campus of the China Academy of Art was designed by Wang Shu, dean of the CAA School of Architecture and the first Chinese citizen to win the Pritzker Prize, the world’s top prize in architecture. Conrad spent his first morning in Hangzhou exploring the campus and searching for two sites that would work for the class projects he had prepared in advance with Professor Bruce Sharky.

The class met three times a week for three weeks. Conrad divided the 32 students into teams of three so he would have enough time for critiques. The students were asked to reimagine two existing sites on the campus of CAA: an open, outdoor space and a partially enclosed, more urban space. On the last day of class, the students’ work was reviewed by the landscape architecture faculty at the academy, and winners were declared for each of the two projects.

Of course, it wouldn’t be a Max Conrad class without a fieldtrip—a new concept for his Chinese students. He arranged a daytrip to Shanghai, where the students visited two firms: SWA Group, an international landscape architecture, planning, and urban design firm with offices in the United States, China, and the Middle East—a firm that employs several LSU School of Landscape Architecture alumni—and Old Farmer Landscape Architecture Company.

Old Farmer is headquartered in Taipei, Taiwan, and participates in the School of Landscape Architecture’s internship program. LSU alumnus Charles Yang (MLA 1993) works at Old Farmer and arranged for Robert Tsai, founder of the firm, to host the group. Before the firm treated the students to lunch, somehow, the office discovered it was Conrad’s birthday and surprised him with an enormous cake. The students also visited two work sites in Shanghai. “I can’t have students and not go on a field trip,” said Conrad.

Alumnus Kurt Culbertson (BLA 1976) of the Design Workshop in Colorado discovered Conrad would be in Hangzhou and sent an introduction to his contacts at Senhe Seed Company, one of the largest horticulture and landscape companies in China. Conrad ended up visiting Senhe three times while in Hangzhou.

The first time, he toured the company’s landscape architecture division and visited Senhe’s growing areas and demo garden centers. The second time, he was driven to Senhe’s headquarters and introduced to Chairman Zheng Yongping, or “Paul”, who showed him one of their newest products: indoor, computer-controlled green walls. Paul insisted Conrad return and lecture Senhe’s employees, which resulted in Conrad’s third visit to the company. The lecture was attended by more than 200 Senhe staff, and Chairman Paul, the vice president of Senhe, and other leaders attended the lecture.

Conrad’s lecture was put to use a fourth time when he was invited to speak as one of three lecturers in a series at the Hangzhou Botanic Gardens. At the end of the lecture at the gardens, Conrad was presented with an envelope full of cash. Conrad used the cash to stuff the traditional Chinese red envelopes to award the teams who placed first, second, and third for their class projects.

Project winners pose with prizes. The red envelopes are full of the cash Professor Conrad received for lecturing at Hangzhou Botanic Gardens. Red is considered a lucky color in China.