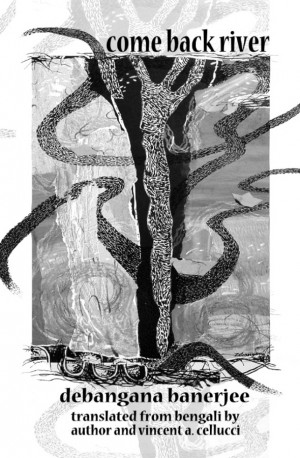 School of Art graduate alumna Debangana Banerjee and CxC Studio Coordinator for the College of Art + Design Vincent Cellucci have an art and poetry publication being released by Finishing Line Press early next year. Finishing Line Press (FLP) is an award-winning small press in Georgetown, Kentucky; FLP hosts the annual New Women’s Voices Chapbook competition and specializes in chapbooks, which are an early type of popular literature printed in limited editions, usually including verse and art.

come back river is a bilingual chapbook of contemporary Bengali poems written by Debangana Banerjee and their English versions, which Vincent Cellucci assisted the author in translating. Banerjee was a printmaker during her time at LSU, and her woodcuts are featured as cover art. Her digital design skills were developed and honed in the Art + Design Communication across the Curriculum (CxC) Studio, where she received her graduate assistantship. In between communication tutoring sessions, College of Art + Design projects, and her thesis work, Debangana discovered her and Cellucci’s inspirations converged in the image of the river, specified in the Mississippi but also as a global life symbol.

Debangana was born and raised in Santiniketan, India. She received Masters of Fine Art from Visva-Bharati University, Santiniketan in 2005 and from LSU in 2010. She was a national scholar in India. Debangana exhibited her art in many exhibitions in the US and internationally. She is currently an artist and resident of San Marcos, Texas.

Vincent Cellucci wrote An Easy Place / To Die (CityLit Press, 2011) and edited a contemporary poetry anthology released by Lavender Ink of New Orleans in 2012. come back river is his first chapbook publication. Cellucci praised Debangana’s work saying, “These are the best poems I have ever written, and I didn’t write them. Debangana did. And she possesses such a strong poetic sensibility that all I had to do was keep my fingerprints from smudging the translations.”

The first five translations of come back river were published in the second volume of Toad Suck Review. Writer, editor, and translator for Toad Suck Review Mark Spitzer said, “Cellucci’s translations of Bangerjee’s fluid poetics are just as visceral and velvety as the original text, composed in a tangy, tangible dream state of winding, whooshing reverence. The river motif welcomes us into another deep and sensitive dimension that is equally lyrical and contextually rich.”