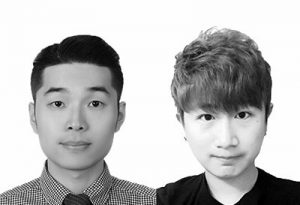 The project, spurred by the catastrophic flooding of Louisiana in August 2016, researches why Baton Rouge’s urban and suburban spaces have a distinctive look and feel, largely because of the intertwining systems of infrastructure, land development, and the “laissez faire” culture as those flood waters receded.

“As landscape designers, our missions are not only to design beautiful gardens and parks, but also to help cities refine a model to protect from disasters,” Shen said.

Lee and Shen’s research investigated impacts and the disaster economy of large infrastructural systems. The proposal aims to connect existing lakes and levees with a weir system and reuse of vacant urban lots for filtration branded the blue network, as well as a green belt flood zone that houses a flood reservoir and an emergency beacon system retrofitted into towers to alert the public of future emergencies.

“Water is the heart of Louisiana. Water is why Baton Rouge was founded,” the Disaster Autopsy Model project statement says. “Water that moves, water that sits, water that rises, water that cleanses, and water that destroys. Canal water, ditch water, muddy water, spring water, crawfish water, dark water. The history of south Louisiana is a history of man learning to live with water and learning to shape water to our own means.”

On the Gulf Coast, impacts of climate change are most frequently evidenced in flooding caused by hurricanes and sea level rise. However, flooding associated with cloudburst phenomena (sudden, intense rainfall with relatively short notice and duration) is not as well documented and understood.

To help mitigate the issue of cloudburst flooding, the project focused on using existing lakes and levees with a weir system branded the blue network, as well as a green belt flood zone that houses a flood reservoir. The authors also proposed an emergency beacon system retrofitted into cell phone towers to alert the public of future events and the reuse of vacant urban lots for water recharge.

“The design intention is to educate and promote community stewardship, awareness, and responsibility between personal and government,” Lee and Shen wrote.

Prior to the planning and design phase, Lee and Shen examined the documented disaster areas and analyzed the causes and effects of the storm. During the study process, individuals from the Baton Rouge Area foundation, local planners, and landscape architects provided feedback to discuss flooding and resiliency with the aim to ultimately create solutions.