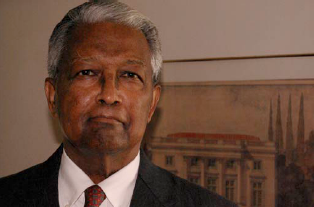 Julian T. White, a retired professor of architecture at LSU who was the university’s first black faculty member, died on Tuesday, July 19, after battling cancer. He was 73.

Born and raised in Alexandria, La., where he also operated W.A. White Funeral Home, White received both his undergraduate and graduate degrees from the University of Illinois Urbana-Champaign campus. Prior to his arrival at LSU, he taught at both Southern University and Tuskegee University.

When he joined the faculty of LSU as a professor of architecture in 1971, White became the first black professor in the university’s history. After a 33-year career in education, White retired from the university in 2003.

White also maintained an architecture firm in Baton Rouge, with the majority of his projects concerning work with area schools and churches across the country. He also served for numerous years on the State of Louisiana’s Board of Architectural Examiners.

“The LSU community is saddened to hear of the loss of Julian White, who helped to educate and prepare scores of architecture students over his 30-plus year career here,” LSU Chancellor Mike Martin said. “He certainly holds an important place in the university’s history by breaking the color barrier as its first black professor. However, he also leaves behind a strong impression with his fellow educators and the students who he taught, as well as a lasting legacy in the architectural community. We offer our sincere condolences to his family, friends, colleagues and former students in this difficult time.”

White is survived by his wife of 50 years, Loretta, and their children.

Funeral services for White are scheduled for Saturday, July 23, at noon at Union Historic Baptist Church, 601 Lee St. in Alexandria. A memorial service will be held at a later date at University Baptist Church in Baton Rouge.

In lieu of flowers, White’s family asks that donations be made to the Julian T. White Memorial Scholarship fund. Checks should be made payable to the LSU Foundation (memo line: Julian T. White Memorial Scholarship) and sent to the LSU Foundation, c/o Michael D. Robinson, College of Art & Design, 102 Design Building, Baton Rouge, LA 70803. Donations may also be made to the American Cancer Society.