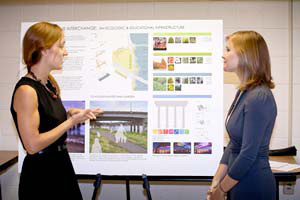 East Baton Rouge Mayor-President Kip Holden announced today the official start of a landscaping project along Dalrymple Drive near Interstate 10 that was designed with assistance from LSU’s Robert Reich School of Landscape Architecture.

The project, created by recent LSU master of landscape architecture graduates Andrea Galinski and Mary Martinich, is one of two that were officially unveiled during a press conference held at the Capital Area Technical College, or CATC, Baton Rouge campus.

The second project is a tree planting along North Acadian Thruway near the CATC campus created by students in the Southern University’s School of Urban Forestry.

These two projects will be the seventh and eighth beautification projects funded under the Green Light Plan. Both projects are being funded equally through $100,000 in dollars from Holden’s Green Light Program.

“We’re very excited to see this plan come this far,” Martinich said. “A lot of hard work went into this project, and it’s great to know that it’s going to become a reality.”

The LSU pair presented their project during the press conference, highlighting the need to improve water quality in the lakes while also beautifying an area which serves as an entrance both to Baton Rouge as well as the LSU community.

“People love the LSU Lakes,” Galinski said. “There are always joggers, bikers, walkers, boaters and others who are around the lakes. But what people don’t know is that the lakes also suffer from poor water quality.”

The plan uses native trees and other vegetation for a proposed contour-planted rain garden at the Dalrymple Drive exit off westbound Interstate 10. The rain garden is designed to enhance the water quality of the LSU Lakes by minimizing storm water runoff.

The students also developed a second phase of the project that would install colored lights beneath the I-10 bridge over the lakes to indicate changing water quality. The lights would subtly change colors to reflect fluctuations in dissolved oxygen levels using water quality sensors recently installed in the lakes by the LSU Department of Renewable Resources.

Jeff Carney, an assistant landscape architecture professor at LSU who worked with city-parish government on the project, said that the LSU project was selected in a two-phase, open competition within the school that included both undergraduate and graduate students. A collection of professional guests then judged the entries, selecting the design submitted by Galinski and Martinich as the eventual winner.

“In the first phase of the competition, we tried to generate a lot of new ideas,” Carney said. “Three teams were chosen in the first phase. The second phase included taking economic issues into account with a $50,000 budget.”

Carney added that the contest gave students a chance to earn real world experience before entering the full-time working world.

“In graduate school, there’s oftentimes a break between the academics and the profession,” Carney said. “Any chance we have to expose our students to a professional opportunity is worth a lot.”

Tim Cockerham of Baton Rouge Green, who also serves as the Green Light Plan Beautification Program Manager, said the mayor’s office came up with the idea of involving both LSU and Southern University students in the beautification projects.

Holden said including the city’s two universities in the process opened doors to a wealth of ideas and opportunities.

“We knew we had to reach out to others in the community and include our universities and the assets they have there,” Holden said. “You have to inventory your assets. We’re amazed with the quality and quantity of talent we have to move forward. We don’t have to go outside of the parish to get things done.”

Holden called the event “a celebration of a new dimension of what we’re doing in Baton Rouge.”

“Between Baton Rouge Green, LSU, Southern, Capital Area Technical College and others, you’re seeing the first of what will be many projects to beautify neighborhoods,” he said. “Those who will actually be doing the work will be college students, who are getting a firsthand look at how they can design some aspects of what’s going on in the city-parish and play a role in making this America’s next great city.”

“You can tell that there’s a lot of pride in our alumni who have helped to improve the Baton Rouge community in this case, as well as to continue to make our school one of the top landscape architecture schools in the country,” Cox said.

MEDIA NOTE: A digital copy of the PowerPoint presentation made today on the LSU beautification project can be downloaded by visiting https://filestogeaux.lsu.edu/public/download.php?FILE=mmart73/30477zlNl44. A box will appear giving the option to view the file or to save it directly to your computer.