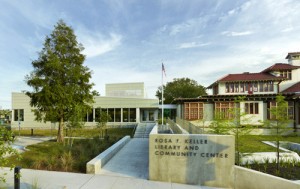 It took seven years, but the new Rosa F. Keller Library and Community Center in the Broadmoor section of New Orleans has risen from the ravages of Katrina and LSU landscape architecture professors and architecture alumni helped.

After the levees breached, the original 1993 building was swamped with two feet of water and the community center connected to it found its foundation in peril. But while Broadmoor faced an uncertain future in terms of rebuilding, its residents organized and pushed forward.

Seven years later, the new library designed by LSU architecture alumni Eskew+Dumez+Ripple (EDR), and the restored community center, with a rain garden in front, serve as a testament to both community resolve and the city’s evolving relationship with water.

LSU Associate Professor of Landscape Architecture Wes Michaels, of Spackman Mossop and Michaels (which collaborated with EDR) said, “The client wanted it to be an educational piece about the larger issue of water. We wanted it to be something that people could understand as a feature of the landscape that would be a beautiful garden as well as a piece of infrastructure.”

The article appeared in the July edition of Metropolis. Read the full story at http://www.metropolismag.com/story/20120720/out-of-the-water.