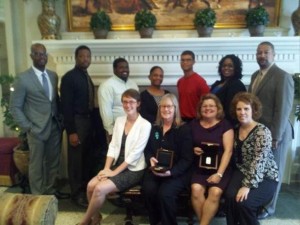 Caffery, whose stained glass, mosaics, sculptures, and paintings are characterized by the use of spectral intensity color, has studied with prominent designers and artists in the U.S., France, Germany and Canada. Her work has been included in the Corning Museum’s annual New Glass Review and is owned by museums in Japan, Germany and the U.S. Her mosaic work can be seen in the New Orleans Louis Armstrong International Airport and the Lafayette Regional Airport.

Caffery has also completed numerous stained glass works for public and private clients, including art for the 2nd District Police Headquarters in New Orleans. Caffery is also the owner of Caffery Gallery (www.cafferygallery.com) at 4016 Government Street in Baton Rouge.

Special recognition was given at the luncheon to the Mid City Merchants’ Association, of which Caffery is a founding member and was president from 1999 until 2005. Both Caffery and the Mid City Merchants Association were awarded the Rev. Mary E. Moody Medal of Lifetime Achievement, which goes to individuals and organizations for their contributions to the MidCity community.