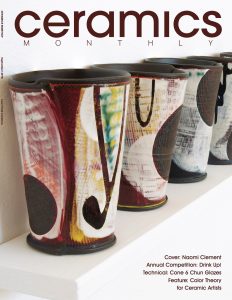 MFA 2017 Naomi Clement’s work is featured on the cover of Ceramics Monthly magazine’s September 2018 issue. She won the Ceramics Monthly Emerging Artist Award in 2017, and recently debuted a solo exhibition in California.

Naomi’s work was accepted to the annual “Drink Up!” ceramics contest, so she knew she would be included in the magazine’s September issue. Then she was contacted by Ceramics Monthly’s editor Jessica Knapp, and Naomi was thrilled to learn her work had been chosen for the magazine cover.

“I’ve been reading the magazine since I first got into ceramics almost 25 years ago. In my wildest dreams I’d hoped to be featured on the cover in some far off future, but I thought that would be years from now,” she shared. “It is such an honor to have my work featured on the cover and knowing that thousands of people will get to see it.” 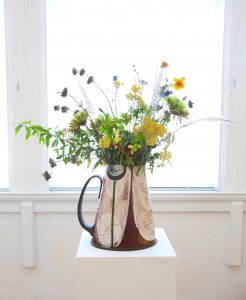 “The show was a culmination of my time there, which was incredible,” Naomi said. “They only bring in two artists in residence a year, and you get a studio, an apartment, and a stipend — all in beautiful Sonoma Valley. Pretty awesome!”

The show itself was in many ways an extension of her MFA thesis show at LSU titled Trace, she explained. Bound features pots that represent nostalgia for her family, and hope for the future. 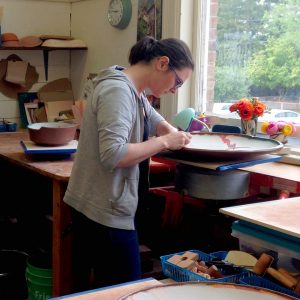 “My work is a constant discussion on how things fit together and how they do not,” she said. “In particular, I am interested in points of transition: the space where orange becomes red, the place where glaze meets bare clay, the edge of a handle and the end of the pot.”

“In my process, I continually seek out and create opportunities for these moments to occur: leaving a seam visible in a hand-built cup, cutting a soft line in the rim of a bowl, or negotiating the space between white slip and bare clay. As a maker, I am interested in how these moments record my decisions and become physical signposts left for a future user. These traces of intent and action say: I was here, please bear witness to that fact.”

Originally from Canada, she got her BFA from Nova Scotia College of Art & Design in Halifax in 2003. She worked as a Sales Associate at Barrel Select Wine Merchants and then as a marketing coordinator at a travel company in Toronto before she came to LSU as a graduate student. Ceramics always called to her.

“I make pots because I truly believe that life is different when you choose to surround yourself with objects that already have a story when they reach you,” she stated. “There is a different tenor to your day when you encourage the objects you use to become part of the fabric of your life, rather than mere accessories. I make pots to add my voice to this story—creating useful objects that will hopefully bring joy to people’s daily lives, and go on to forge connections and stories of their own.” 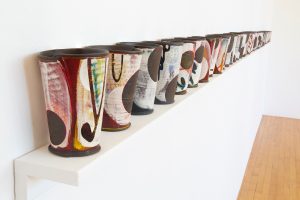 Life after LSU has been busy so far, she said. She spent last fall teaching at a college in Pennsylvania as a sabbatical replacement, before coming to Sonoma, California for the artist residency. (She previously did residencies at Arrowmont School of Crafts in Tennessee, Watershed Center for Ceramic Arts in Maine, and Medalta International Artist in Residence Program in Alberta, Canada.) Naomi recently moved back home to Canada and is working on setting up a studio there.

“My goal is always that my pots will introduce a little beauty into the world, and ideally create a space where the user can pause to savor a moment of calm in the midst of a busy day.”