As the Thanksgiving holiday approaches, we often take time to recognize what we are thankful for in our lives. Two former LSU interior design students—Elena Proskurina and Kristen Fisher—are thankful to have found rewarding and fulfilling positions at outstanding design firms almost immediately after graduating from the LSU School of Interior Design. Kristen was hired as a technical designer at Gensler in Houston, and Elena is working at Callison Global in Dallas. Both attribute their success to the experiences they received as interior design students at LSU. 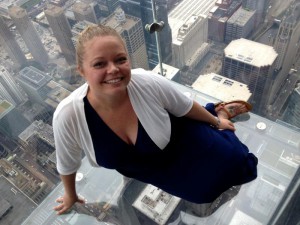 Kristen Fisher said her third-year internship and fourth-year capstone project were instrumental in her success. In the fourth-year design studio taught by Associate Professors Matthew Dunn and Phillip Tebbutt, students entered their work in a design competition sponsored by Cornerstone Commercial Flooring. The annual competition requires students to write flooring specifications for their projects. These “spec-books” have to be detailed and correct, just as they would be in a set of professional documents.

Kristen’s project, the conversion of a historic building into a restaurant and apartment, was selected as the winner of the 2014 Cornerstone Commercial Flooring Competition. Her reward was an all-expenses-paid trip to NeoCon in Chicago: NeoCon is North America’s largest design exposition and conference for commercial interiors. The prize is a great mentorship and networking opportunity, especially for a student approaching graduation. A Cornerstone executive escorts and mentors the winning student at the conference. Kristen explored NeoCon with LSU School of Interior Design alumna Shelly Jones (BID 2002), vice president of business development at Cornerstone Commercial Flooring. 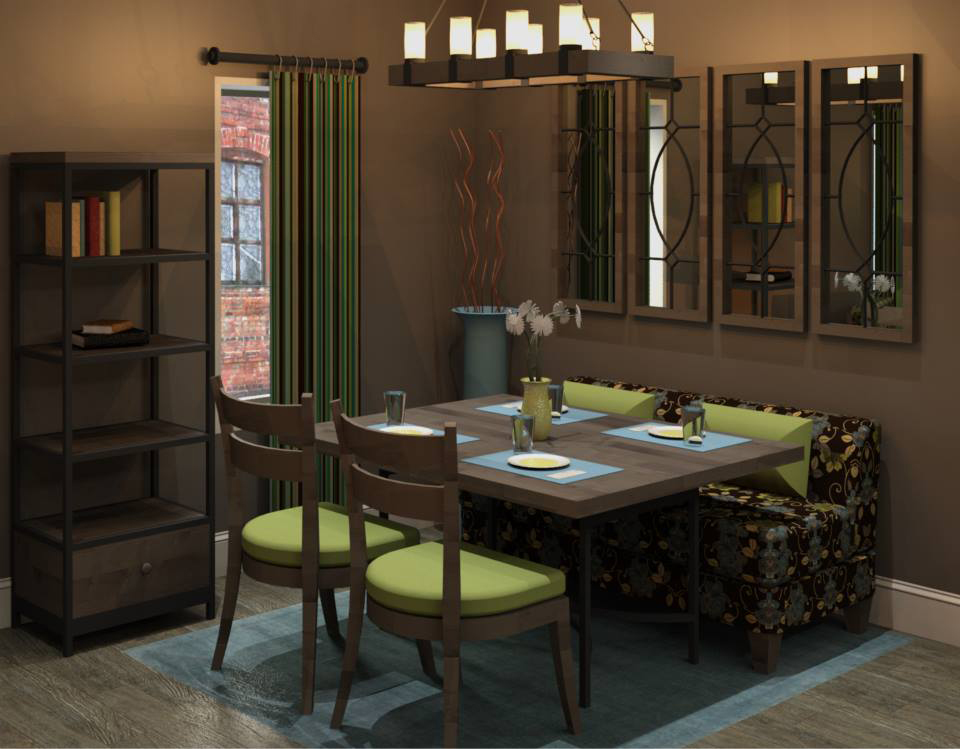 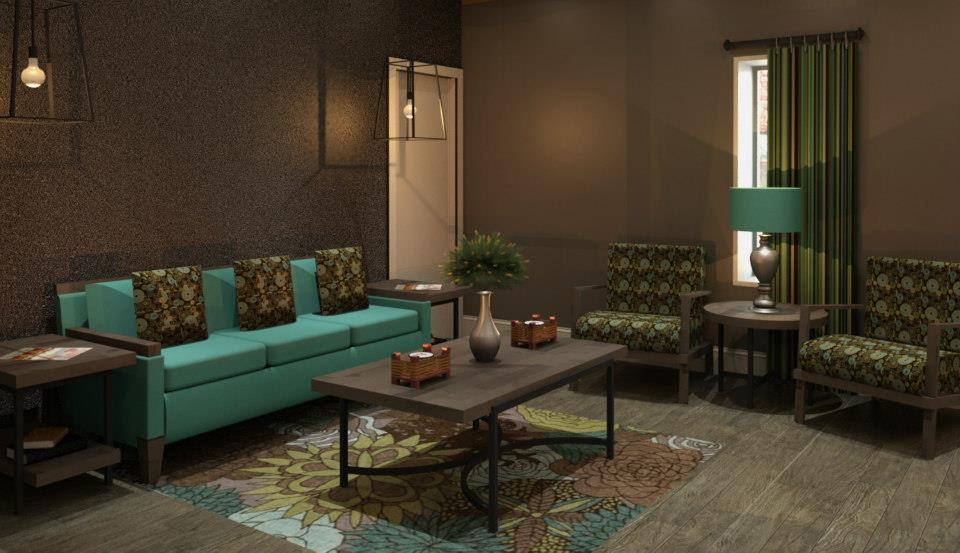 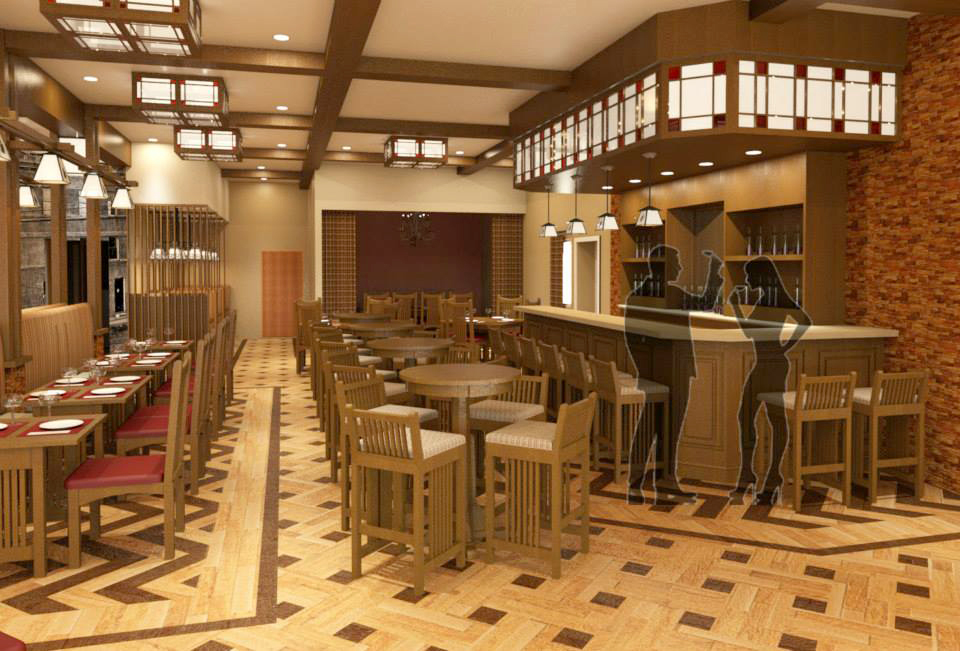 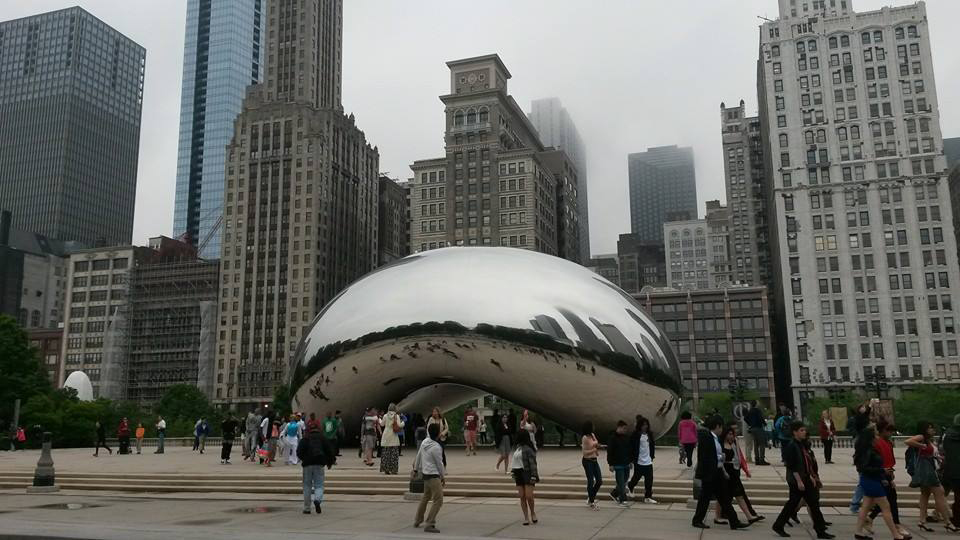 At NeoCon, Kristen and Jones were invited to a luncheon hosted by Bentley Mills, and Jones introduced Kristen to everyone she knew. The pair also took advantage of the conference’s locale in one of America’s largest cities. They visited Grant Park, where they viewed Frank Gehry’s Jay Pritzker Pavilion and Anish Kapoor’s Cloud Gate. They took an architectural boat tour of the city and saw Frank Lloyd Wright’s Robie House. And, of course, they went to the top of Willis Tower, America’s tallest building and one of the most impressive office spaces in Chicago. “It was a great experience and also a lot of fun,” Kristen said.

Kristen credits winning the competition to her internship at Sauviac+Dang, an architectural design firm in Baton Rouge, cofounded by Loi Dang and LSU School of Architecture alumnus Craig Souviac (BArch 1991). Students pursuing a Bachelor of Interior Design at LSU are required to participate in professional internships during their third year of study. By interning at a small firm, Kristen was involved in every aspect of the design phase, including the spec-writing process. “I wouldn’t have had the NeoCon experience without that internship,” she said. “I relied heavily on the vast knowledge and experience of my professional mentors, Loi Dang and Craig Sauviac. Without their patience and willingness to teach, I would have been lost. I was lucky not only to have mentors who taught me how to write specs and complete construction documents; they also taught me, by example, the type of professional I wanted to become.”

Spec-writing had not been covered in classes until the capstone project, Kristen recalled. She said the process was one of the most valuable aspects gained from completing her senior project. “It was a daunting experience for a lot of my classmates,” she added. “It is a tedious and exact practice, but it is such an important part of working in the real world.” Kristen now writes specifications almost every day at Gensler, where she was hired as a technical designer in September. She laughed about how everything ended up coming together for her after graduation. “I received a callback on a Wednesday, interviewed at Gensler on a Thursday, was notified I had the job on a Friday, and was asked to move to Houston and start working in two weeks! It still feels like a dream to be working here,” she gushed. “All throughout school, you hear about how Gensler is the epitome of a career in design. I am thankful that I had the opportunity to go back to college at the age of 28 to pursue a degree and career that I truly wanted. I am also thankful that I was offered a position at Gensler, the top design firm in the world, immediately after graduation. I feel truly blessed to be where I am now in my career,” Kristen shared.

She is not alone at Gensler, either. At Gensler’s Houston office, Kristen sits just two rows away from two other recent LSU interior design alumni, Madeline Drone (BID 2013) and Sarah Eilek (BID 2013). “LSU will always hold a special place in my heart. I love to talk LSU to anyone who will listen, any chance I get,” Kristen said. 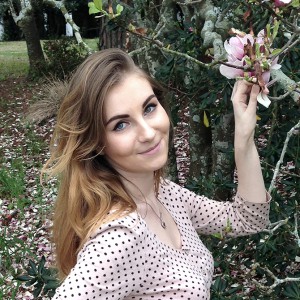 Elena Proskurina (BID 2014) is a designer at Callison Global in Dallas.

Elena Proskurina transferred from Russia to LSU to study pre-med, but switched to interior design after one year, “and I do not regret it,” she firmly stated. She had attended an art school in Russia, and earned a minor in fine arts in addition to a Bachelor of Interior Design. “The way they teach art in Russia is very different; professors are more conservative. I remember my first couple of months, all we did was draw matchboxes and nothing else. I must say I got pretty good at it,” Elena said. “My art minor at LSU has become very applicable to my work as an interior designer. For my senior project, I incorporated graphic design elements in an interior space. Graphics in interior design is becoming more and more common, and I expect to continue to access my background in art throughout my career,” she added.

Elena said all of her projects at LSU helped her get the position at Callison, “not just by building my portfolio, but by giving me the internship experiences that helped me be successful once I started working here. Having the experience of working on design projects based on real buildings and sites made studying at LSU even more rewarding and a better stepping stone to the professional world.” 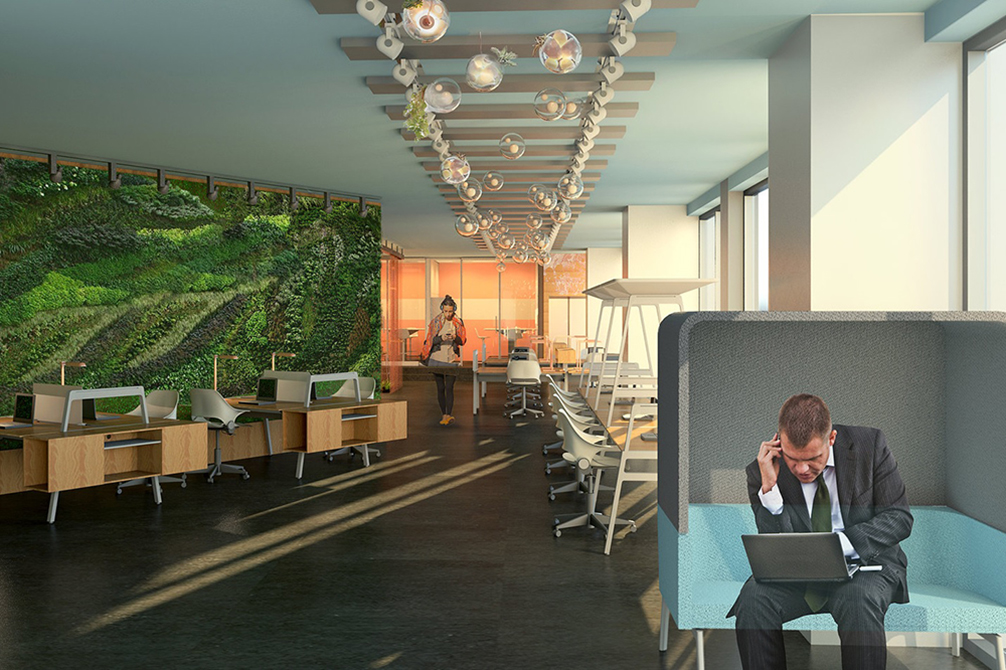 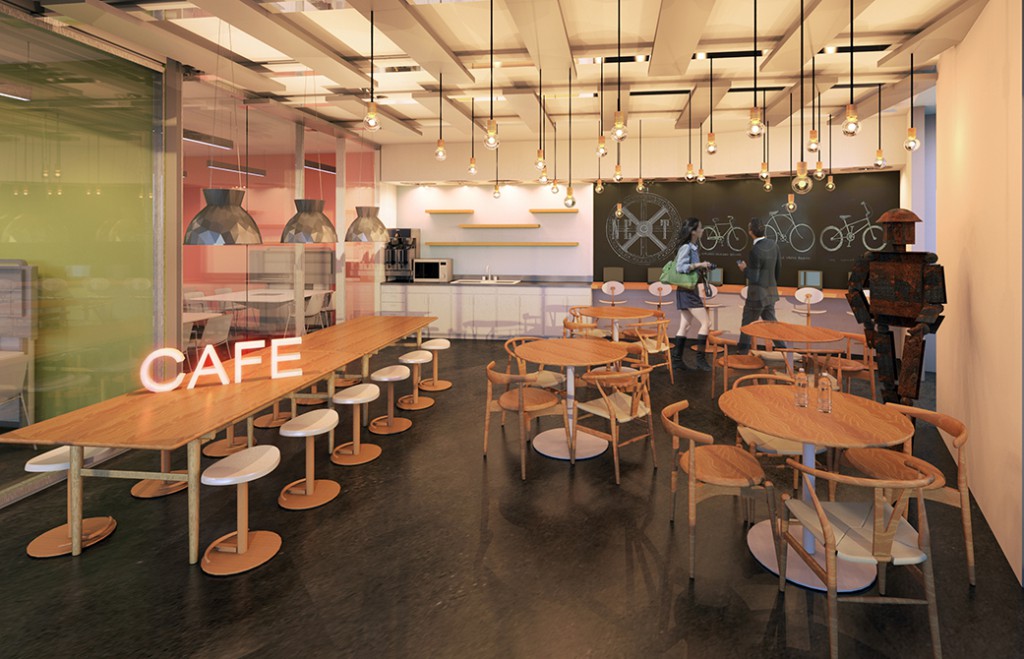 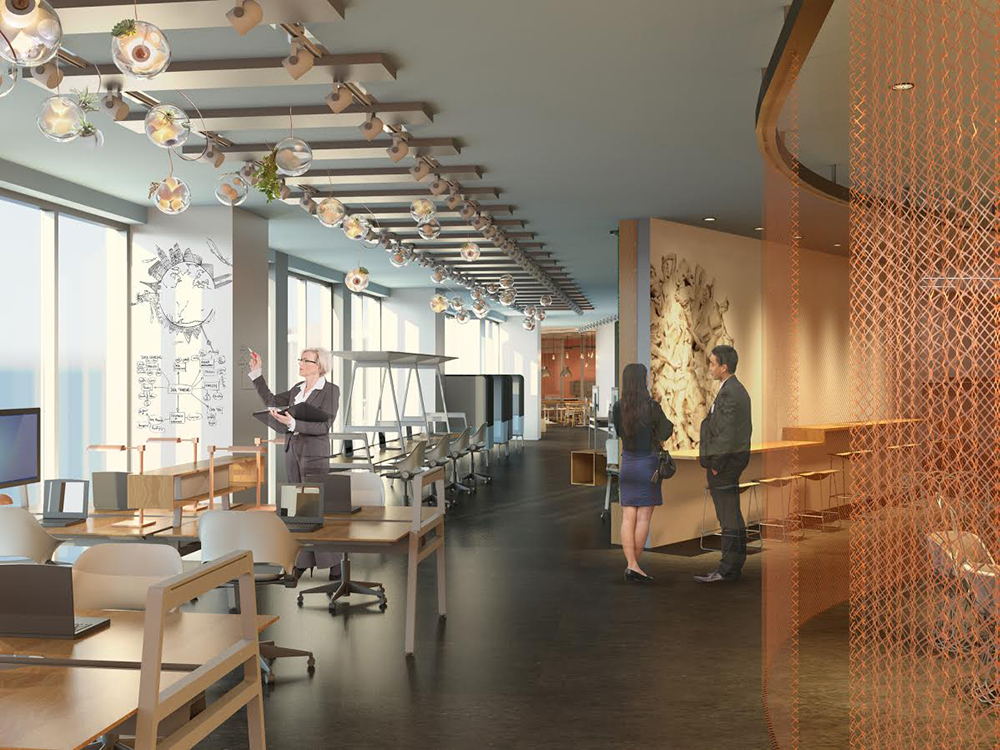 Prior to her senior year at LSU, Elena interned at Eskew+Dumez+Ripple, an New Orleans-based architectural design firm founded by three LSU School of Architecture alumni in 1989. At EDR, Elena worked on real projects, including the design of Sucre, a boutique candy store in New Orleans, and she saw first-hand how a design is managed from start to finish. “Aside from working on a real design project, I was part of a team effort. This was a great learning experience for me. I worked with talented and inspiring designers and architects, and I learned something new from them every day.”

Before Elena graduated in May 2014, she also earned certification as a LSU Distinguished Communicator, a unique academic excellence program where students work with a Communication across the Curriculum (CxC) representative to refine their communication skills and learn discipline-specific approaches to communication that enables them to excel in their chosen profession. The CxC Art & Design Studio is one of seven such locations across campus. “Since I’ve begun my career, I’ve discovered more and more the importance of the CxC program, as I use verbal, written, visual, and technical communication every day. Having the experience of writing, speaking, and designing with an audience in mind and a message to be delivered constitutes the majority of my job at Callison,” she explained.

Elena began working at Callison Global’s Dallas office right after graduation in May. She is currently working on Starbucks retail projects in New York and Florida, “which is a lot of fun, although I miss just being an innocent Starbucks customer,” she laughed. “As we approach Thanksgiving,” Elena added, “I would say that I’m most thankful for being able to celebrate it with the people I care about, who became my good friends and supported me here for five long years.”