A proposal presented by Design Workshop of Austin, Texas, was chosen as the winner of a competition to design a memorial to commemorate the Battle of New Orleans at Chalmette in time for the bicentennial anniversary in 2015.

The competition was administered through the LSU College of Art + Design and directed by Lake Douglas, associate dean of research & development at the college and associate professor at the Robert Reich School of Landscape Architecture.

The competition evolved from an initial contact between the LSU College of Art + Design and W. Henson Moore III, Chair of the Battle of New Orleans Bicentennial Commission, created to commemorate the 200th anniversary of the final major battle of the War of 1812.

In March 2011, Moore approached LSU School of Art Director Rod Parker about working with graphic design students to create a logo for the Battle of New Orleans bicentennial. A senior studio class in graphic design worked on the project in the fall of 2011, and students in the Graphic Design Student Office (GDSO) completed the project in early 2013.

Building on that collaboration, in January 2013, Moore asked college faculty for help in creating a memorial for the site of the 1814–15 Battle of New Orleans at Chalmette.

The Chalmette Battlefield and Cemetery is located about seven miles downriver from the New Orleans French Quarter. The re-created defenses extend from the Rodriguez Canal at the Mississippi River to what was then the tree line of cypress swamp at the northern end of the battlefield.

Adjacent to the battlefield is the United States Civil War Chalmette National Cemetery honoring soldiers from the American Civil War through the war in Vietnam. The cemetery sits on the approximate location where the British artillery was located during the Battle of New Orleans.

The British soldiers represented 11 regiments and four detachments and were considered the finest fighting army of its day. The fallen were buried in unmarked graves, and over time, environmental conditions intervened to the point where little evidence remains of the burial sites. Consequently, there is no marker at Chalmette battlefield recognizing the sacrifice of the British soldiers or the years of solidarity that evolved between the two countries.

Because of the budget and time frame, Douglas, a veteran of public art administration, proposed a limited competition to solicit design ideas from national firms experienced in the design of commemorative spaces. In addition to the competition among professionals, the project became the subject of two landscape architecture studios: an undergraduate studio led by Associate Professor Cathy Marshall and a graduate studio led by Associate Professor Kevin Risk.

Funding to support the proposal phase was contributed to the commission by James Coleman Jr. of New Orleans, and 10 firms were invited to send qualifications for consideration. Teams could consider the entire battlefield as the site for their designs and were encouraged to create an experience through their design rather than a physical memorial.

Two objectives of the competition were to commemorate the 200 years of steadfast friendship that has developed between the United States and Great Britain since the conclusion of the War of 1812 and to honor the service of the more than 2,000 British soldiers who fell at Chalmette.

Over the summer of 2013, each firm visited Chalmette Battlefield and began developing their proposals. Kurt Culbertson of Design Workshop and Jeffrey Carbo presented their firms’ final proposals at the LSU College of Art + Design on Friday, September 27, to an audience that included the jury, project advisors, representatives of the bicentennial commission, college faculty, and students.

Alkis Tsolakis, dean of the College of Art + Design, opened the presentation with comments on how events such as these, which display the work of college alumni, are instructive and beneficial for students. 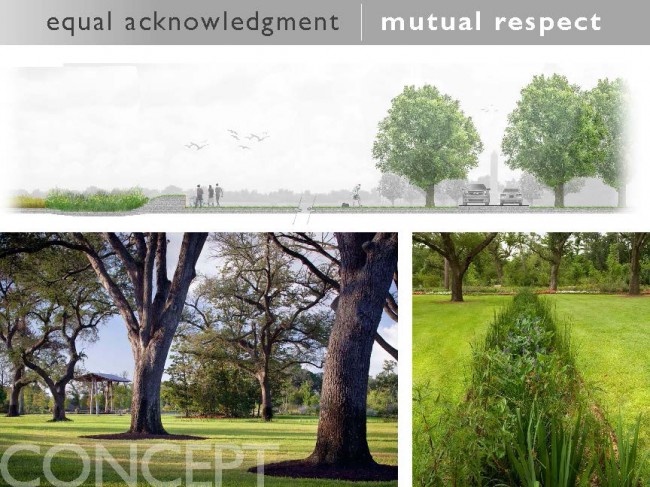 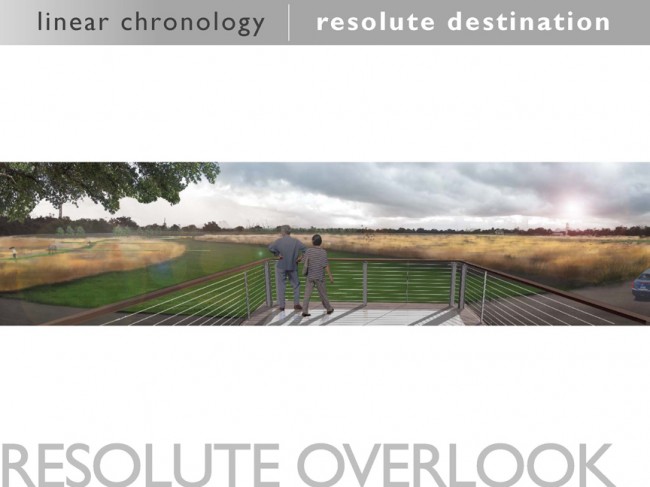 Slide from the proposal by Jeffrey Carbo Landscape Architects, depicting the overlook of the battlefield at Chalmette

Design Workshop’s proposal confined its solution to a small area of swampland where British commander General Packingham fell. The design proposed commemorating the British forces through individual buttons, replicating the military insignia for each British regiment, to be cast into boardwalk railings throughout the swamp area. 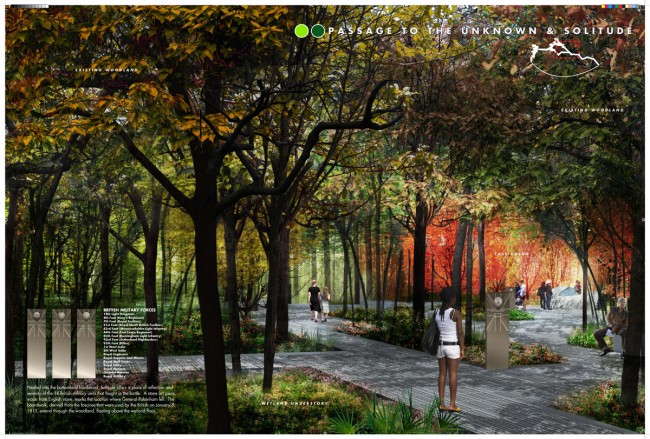 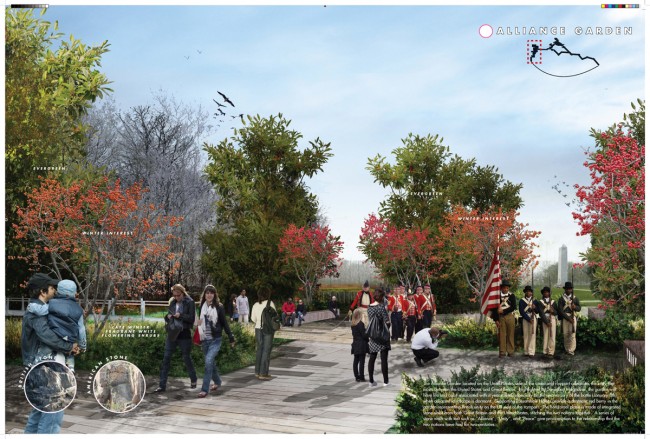 The jury noted how each solution creatively addressed the tasks through different approaches.  Following lively discussion among the jury and project advisers, Design Workshop’s proposal emerged as the jury’s recommendation. Battle of New Orleans Bicentennial Commission Chair Moore complimented both teams on their presentations and thoughtful solutions and observed how jurors expressed interest in ideas from both teams.

Moore also noted that the work to bring this project into reality would continue with a presentation of the jury’s recommendation to the commission in October 2013. The aimed date of completion is to coincide with celebrations planned for January, 2015, to mark the 200th anniversary of the Battle of New Orleans at Chalmette.

The presentations were recorded and can be viewed here.