Allison Regan and Joanne Dolan founded the international artists’ collective First Draught in Galway, Ireland, in 2006. In fewer than 10 years, the collective has grown to include 16 artists hailing from Ireland, England, and Korea to Canada and the United States. Eight of the artists—including Regan—received MFAs from the LSU School of Art. 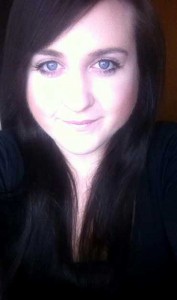 Regan, a Galway-based contemporary visual artist, curator, and teacher, received her BFA from the Galway Mayo Institute of Technology (GMIT) Centre of Creative Arts & Media. She met Malcolm McClay, associate professor of sculpture at LSU, in 2006, when he spoke at her college and expressed an interest in her final exhibition, a 20×24 foot mechanical system.

“There in the middle of the space was an elevated floor with dozens of brooms sweeping, all hooked to a single motor under the floor’s surface,” McClay recalled. “I asked whose work it was and was told it had been made by Allison Regan. I met Allison after the lecture and spoke to her about applying to graduate school at LSU, explaining how our assistantship program makes it financially possible for international students to study at LSU.”

Regan was interested in McClay’s kinetic work and—both being from Ireland—the two kept in touch.

“Two years later I felt like a change and successfully applied to LSU grad school,” Regan recalled. “The time I spent at LSU is unforgettable; I learned so much and met great people.” 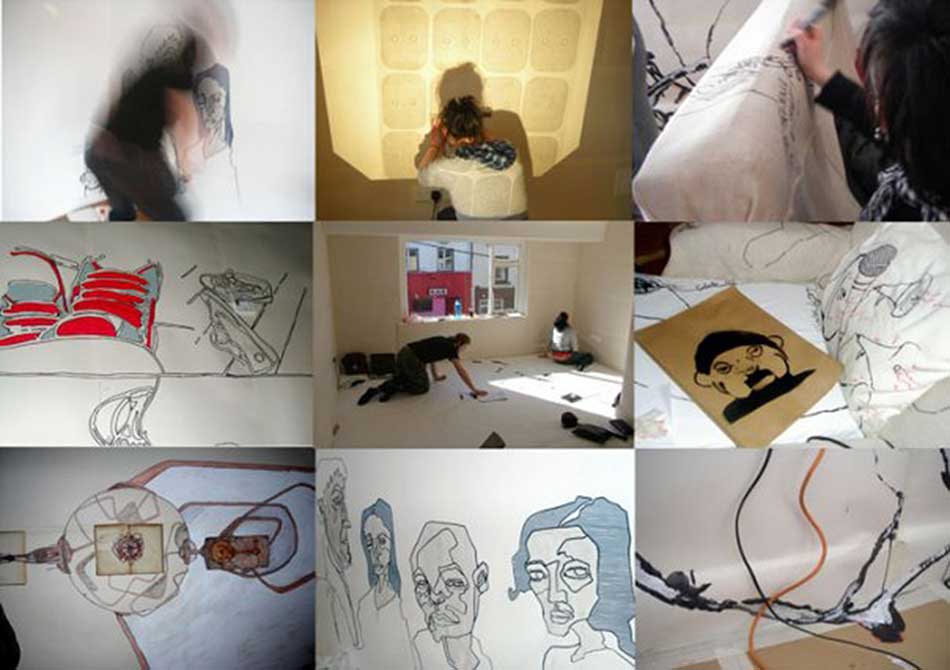 First Draught’s early shows were primarily based around drawing, such as The Drawing Rooms, an event held over 12 hours in March 2007 in a three-room vacant apartment in Galway. When Regan came to LSU in 2008 to pursue an MFA in sculpture, she met a whole new network of artists eager to collaborate. She brought the two groups—American and Irish—together under the name Expanded Draught to reflect the development of the collective and the expansion of its international membership.

“Allison joined the program at a time when we had a very interesting mix of sculpture grads,” McClay related. “Because sculptors often need help making their work, collaboration is a natural outgrowth of our program. The MFA sculpture program at LSU is a close-knit group of students who work together from the beginning, moving in and out of each other’s studios, giving feedback and support. This group dynamic is, I believe, an important aspect of our success. I think of the program as an incubator that pushes the students to individually and collectively achieve more than they could have ever imagined when they first arrived. With Allison’s organizational and leadership skill, and of course her contacts in Ireland, a perfect storm was created and Expanded Draught was born.” 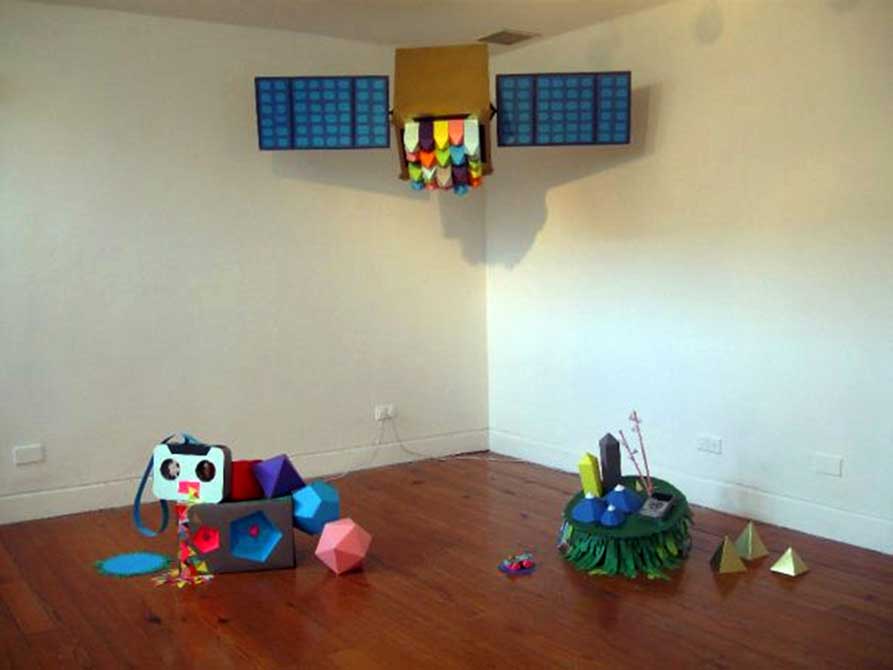 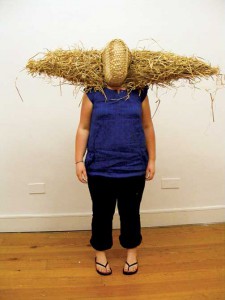 show was curated by Galway-based artist Gina Ruane and partially supported by the LSU School of Art Michael Daugherty Memorial Fund. The 11 Irish and American artists were paired into five teams. After two months of online communication, five LSU School of Art students traveled to Galway, where they worked together with their Irish team members in various locations throughout the city to realize their ideas, taking as their starting point notions of people and ideas being placed and displaced in and out of different contexts and environments.

“Stepping into the Galway Arts Centre to the opening reception of 003D in 2009 and seeing the buzz that these artists had generated was a proud moment for me and a milestone for LSU sculpture,” said McClay.

In June 2010, seven Irish artists traveled to Baton Rouge for three weeks to build, extend, and cultivate a new body of collaborative works for Hello Neighbo(u)r. Working with Culture Candy, a collective based in Baton Rouge, the artists secured two houses scheduled for demolition on Christian Street near LSU’s campus. 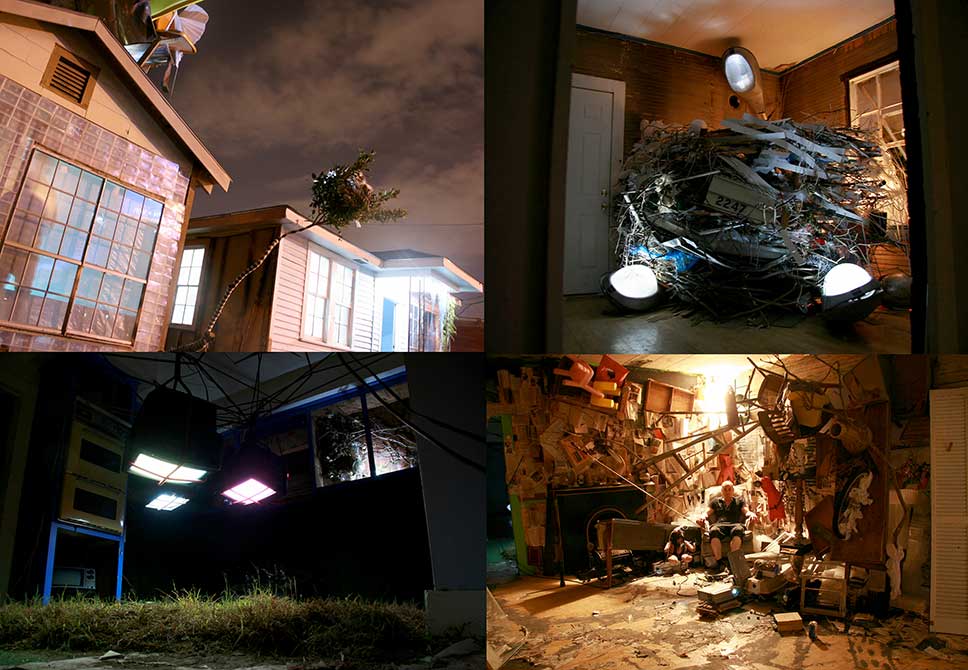 “We were given free rein to create, destroy, adapt, extend . . . with 14 artists participating, we split up into two groups, one for each house,” Regan shared. Each group came up with a narrative as a basis for transforming their house into a large-scale interactive sculpture.

Regan said one of the most striking things about doing a show in America was the sheer amount of free materials available, “something that really doesn’t happen on this side of the water.” They also took advantage of the massive thrift and surplus stores, “where you can get materials for next to nothing. Alongside the cheap and plentiful materials, we had 24-hour use of LSU’s art facilities, which were incredible.”

After receiving her MFA in sculpture from LSU in 2011, Regan returned to Galway, where she continues to codirect the collective. She has also served on the boards of a number of key art organizations including 126 Artist-Run Gallery, TULCA Festival of Visual Art, and ADAPT Galway. She has worked as a researcher for Footfall and as an arts mediator for GMIT Centre for Creative Arts & Media. She has exhibited her artwork internationally as an individual artist and collaboratively as part of Expanded Draught. 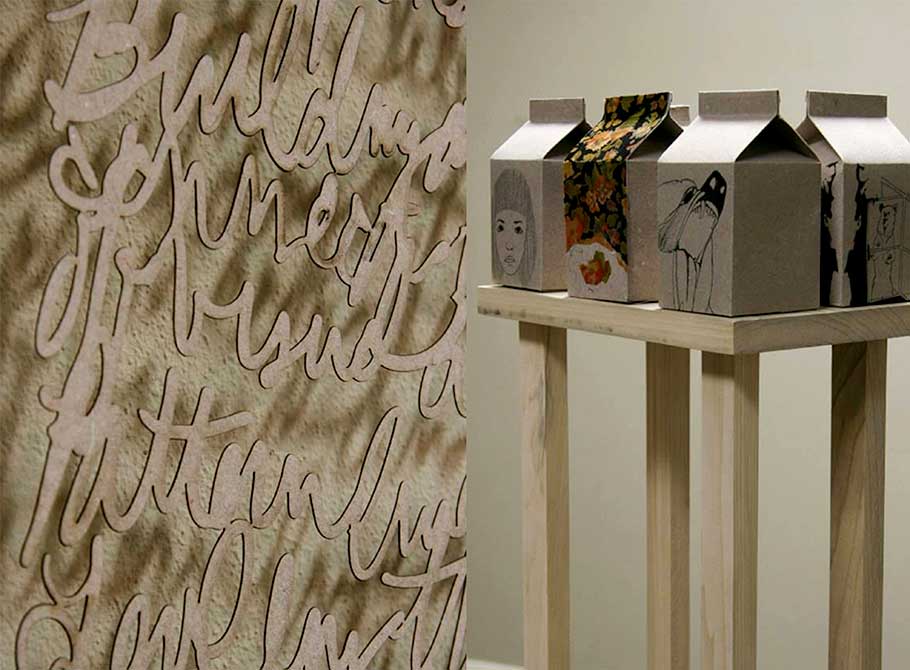 Subsequent Expanded Draught events included a show at The Shed in Galway in March 2013, and Gumbo, in St. Louis, Missouri, in October 2013. For Gumbo, each participant sent four ounces of material to St. Louis artist Megan Singleton (an LSU grad) to use in a Hollander beater to create paper pulp. Once Singleton received all of the ingredients, she made a large batch of paper and mailed three sheets to each participant to use to create a new piece of work. The works were then dispatched to Singleton for the exhibition in St. Louis.

“Exploring collaborative working methods continues to be a priority for our future projects,” said Regan, “and a big part of Expanded Draught’s projects is to get the local community involved.”

Community involvement has taken the form of talks and workshops held alongside shows and events. A travelling series of pop-up workshops called Project Project is a recent and ongoing activity that invites participants to engage in creative exercises and assignments generated by Expanded Draught and partner organizations. Workshops have included drawing self-portraits with only verbal descriptions and drawing landscapes with participants’ hands tied together.

“Eventually it is our hope to tour Project Project in Ireland and the U.S., joining forces for another large-scale collaborative endeavor at each stop on the tour,” said Regan. 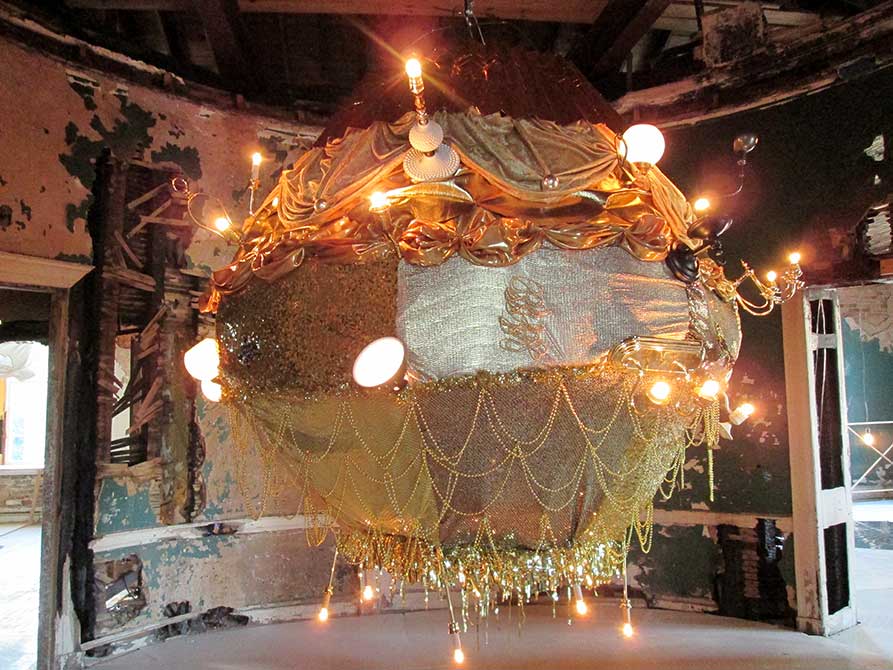 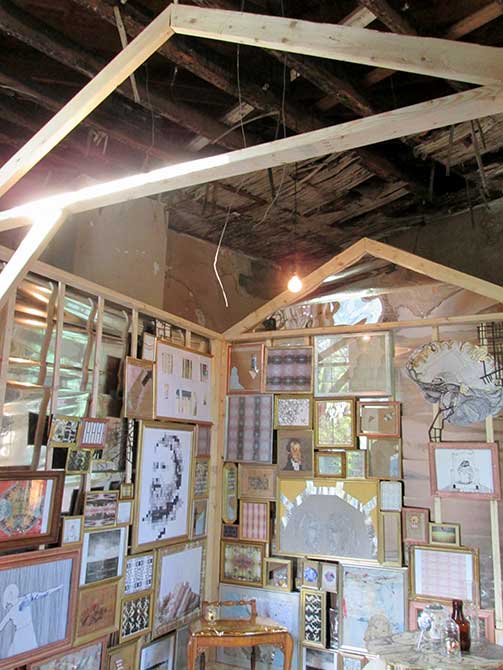 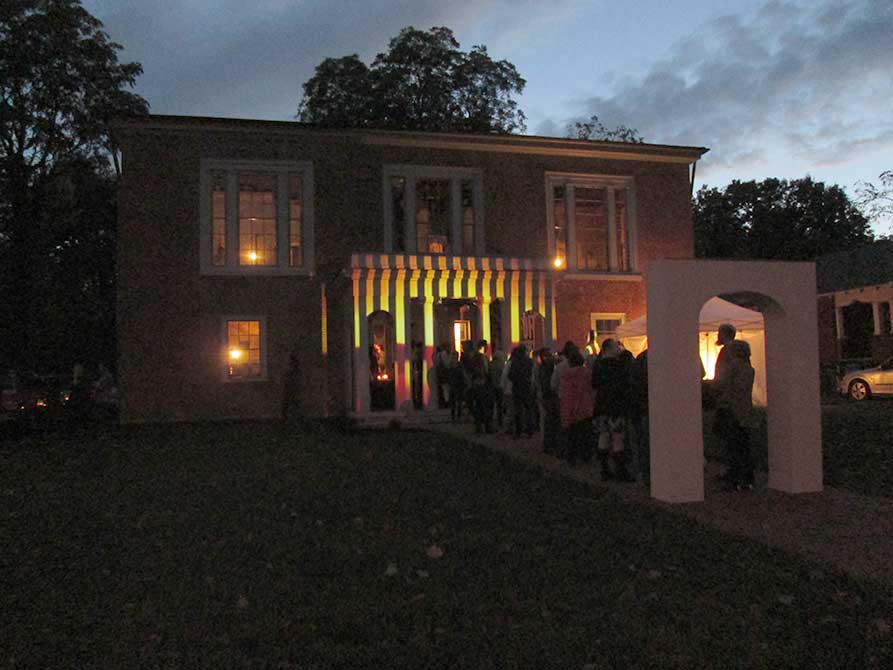 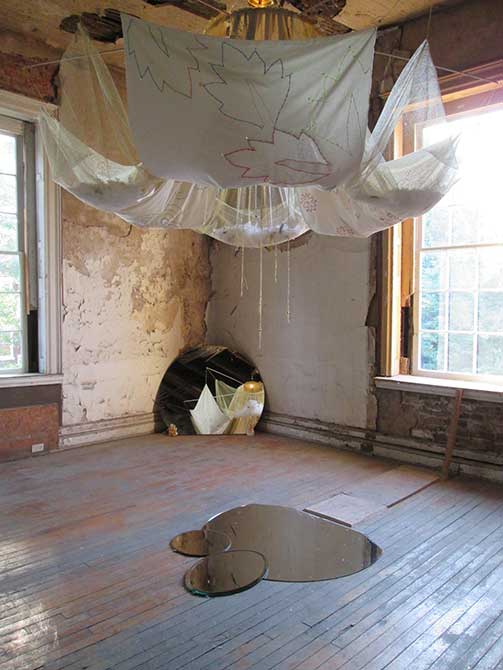 Expanded Draught’s most recent show, If the walls could talk, took place in Lexington, Kentucky, in Benjamin Henry Latrobe’s Pope Villa in fall 2014. Facilitated by the Lexington Art League and Expanded Draught members Cody Arnall and Lindsey Maestri (both LSU alumni), the show was part of INTERSTRUCT, a multi-venue, site-specific exhibition of art in non-art spaces throughout the city. If the walls could talk took the form of an 11-room, large-scale, site-specific installation. The collective goal was to rejuvenate Pope Villa in a contemporary way before its preservation, allowing the audience to view the building in a new light and bring the past back to life. (Visit Lexington Art League at lexingtonartleague.org to view image galleries or watch the group interview on YouTube.)

A truly 21st-century collective, Expanded Draught “couldn’t exist without online communication,” explained Regan. Skype and email are their main forms of communication, and they use Google Drive as well as Dropbox and social media to organize shows.

“Artists are not paid as individuals for their participation, but we all agree that the work we do is mutually beneficial in terms of furthering our artistic endeavors,” added Regan. Where possible, artworks are for sale and, in the past, the artists received 100 percent of sales prices. In the future, Regan said they we will be requesting artists’ fees to create a more sustainable model.

Concepts for shows are germinated from all members through email conversations and threads. At the beginning of each initiative, members decide if they want to participate.

“When it comes to fine details, it is the directors who do the majority of the administration work, such as preparing promotional materials and press releases, but all our members are invited to be involved in all aspects of the shows,” related Regan. Currently, members Kit French, Lindsey Maestri, and Cody Arnall (all LSU alumni) facilitate Expanded Draught events in the U.S. while Regan and Dolan serve as directors, manage events abroad, and deal with most of the administrative work regardless of location. 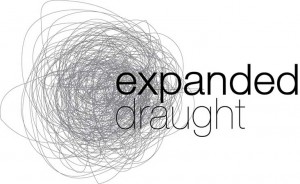 For their tenth anniversary in 2016, Expanded Draught is planning to take over an island off the west coast of Ireland, exhibit in America and Europe, and publish a book about their past 10 years of work.

As the founder and co-director of the LSU Art in Ireland program, McClay visits Regan each summer when he brings students to Galway to tour the galleries. “Each time we meet, Allison has a new liturgy of achievements,” said Malcolm. “She is the driving force behind so much of Expanded Draught’s success. During their three years at LSU, I had the great pleasure of working closely with her and several other sculpture grads in the collective, namely Cody Arnall, Kit French, David Carpenter, and Megan Singleton. Expanded Draught has a very bright future, and I truly believe their best work is still ahead.”

About Sculpture at LSU
The MFA sculpture program provides students with a high-quality, comprehensive education in the three-dimensional arts. Sculpture is one of the integral parts of the School of Art and promotes cross-disciplinary investigation and collaborative ventures. Students are encouraged to develop their own unique visions. The program welcomes a wide range of aesthetic approaches, both traditional and non-traditional. Our graduates have an impressive history of success in both exhibitions and professional accomplishments. For more information about the LSU School of Art MFA program, visit art.lsu.edu.