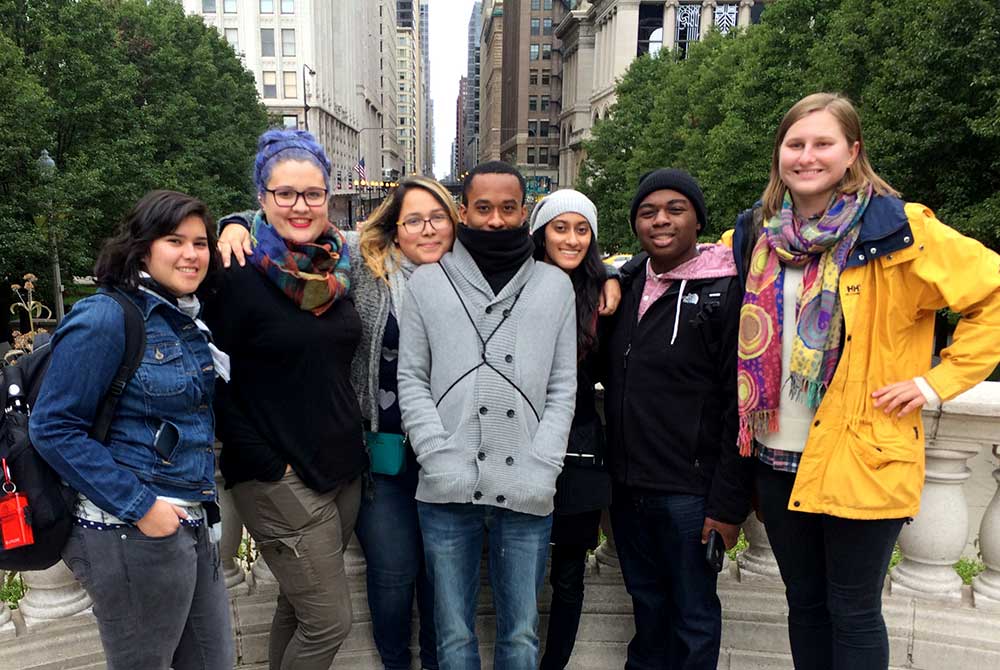 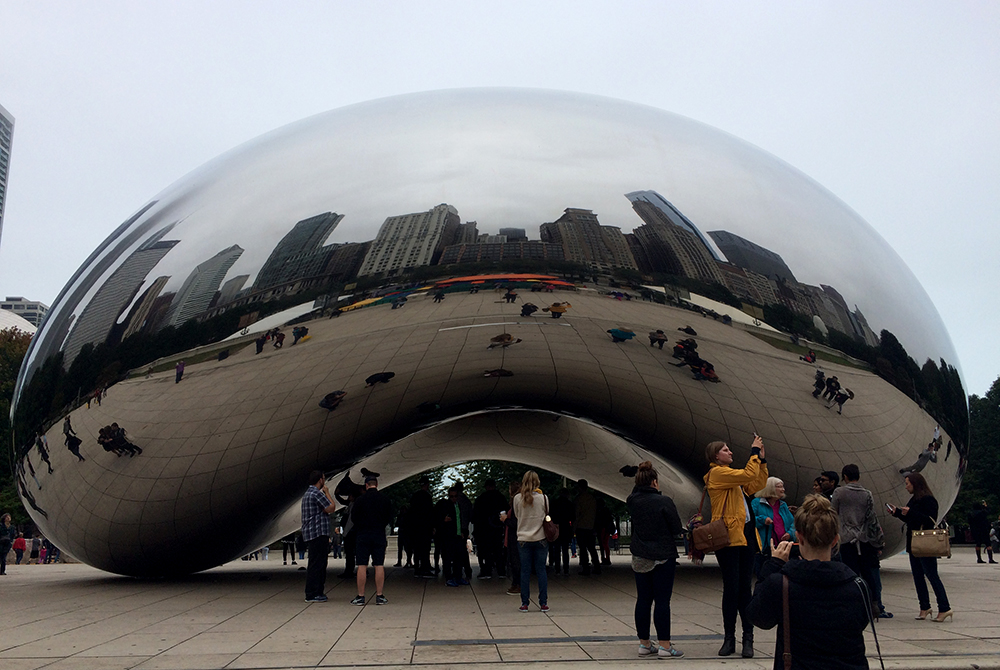 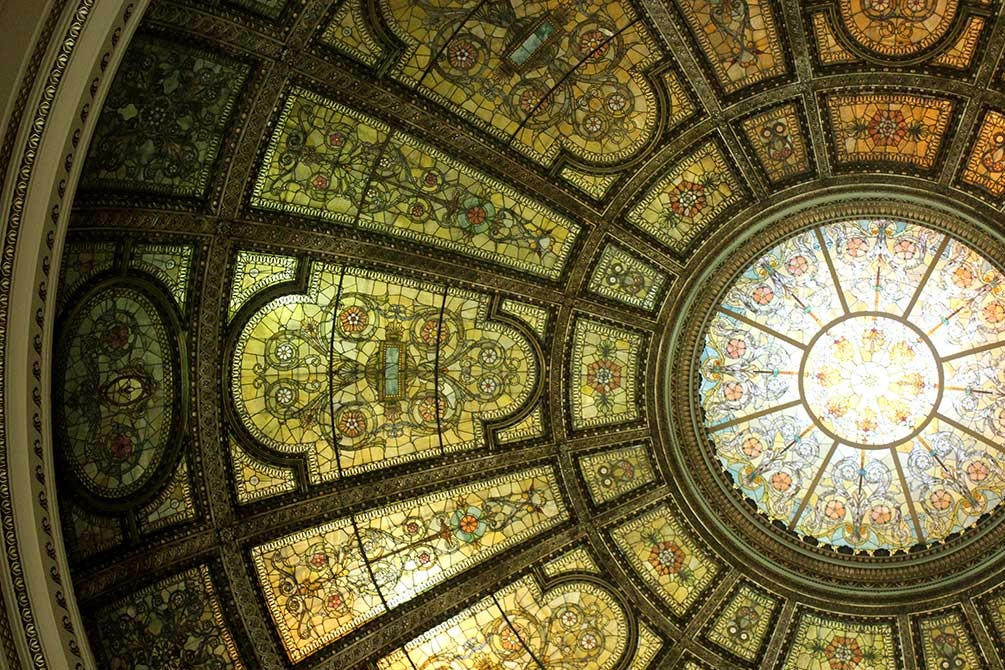 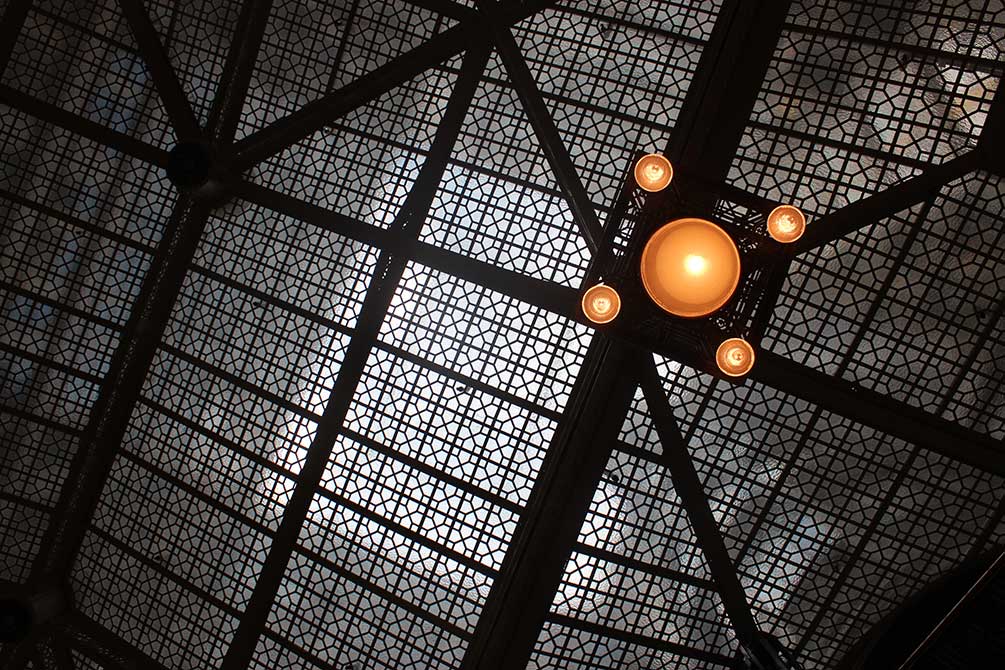 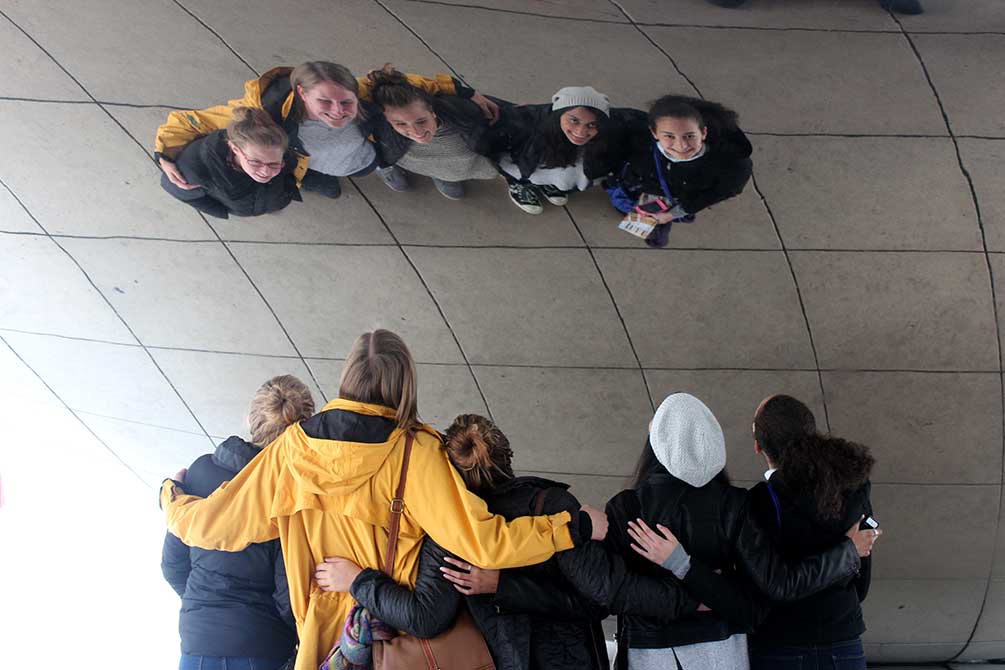 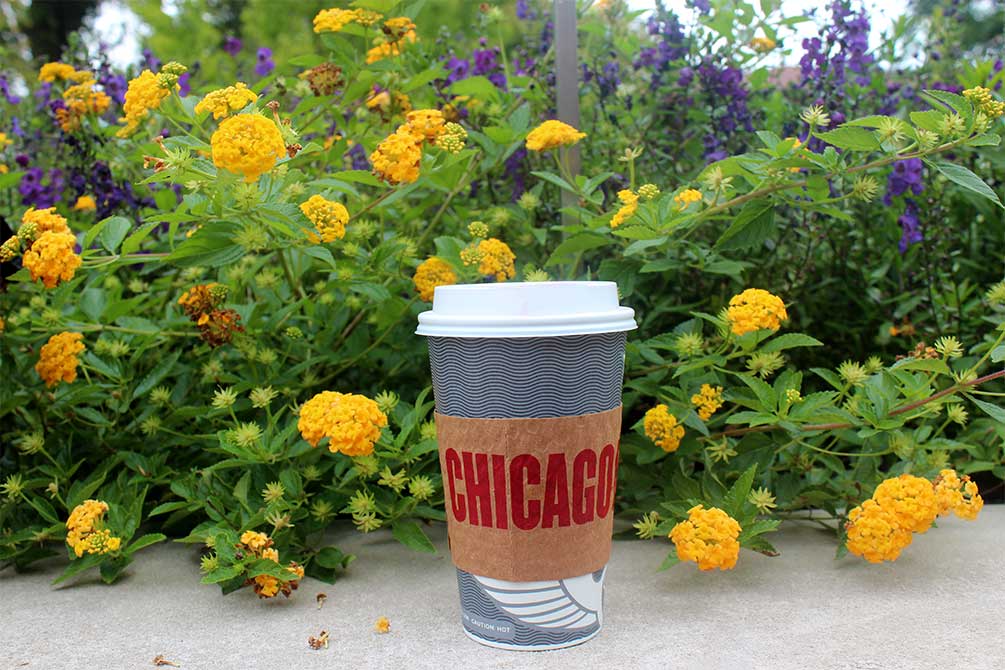 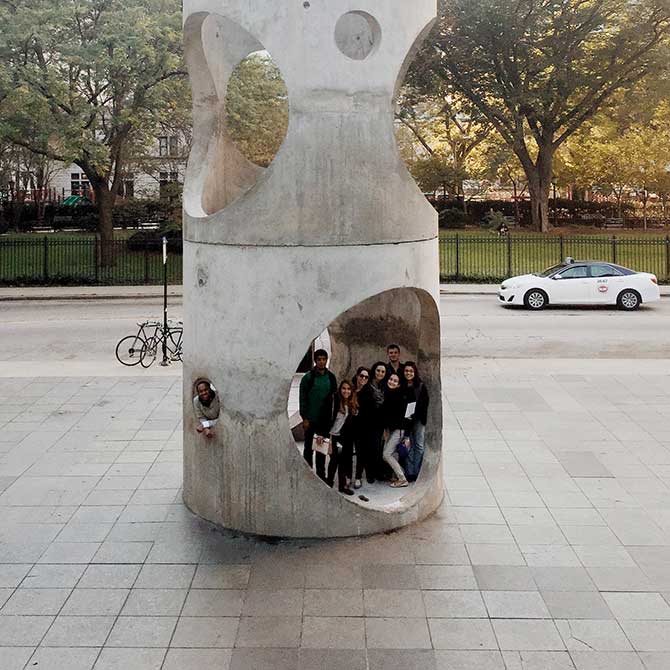 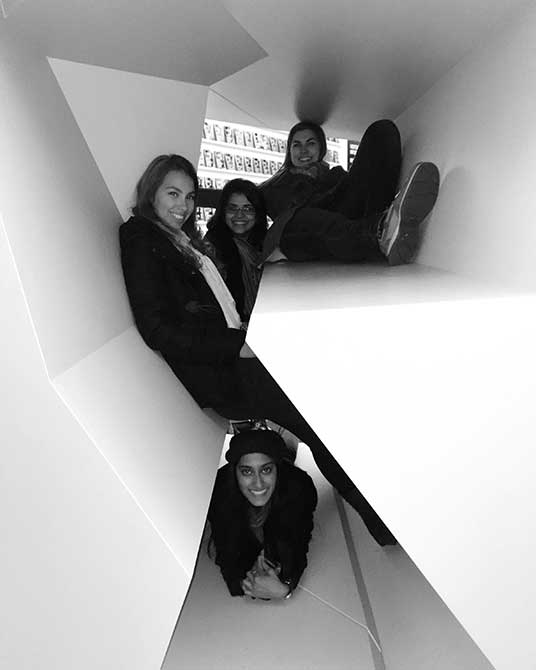 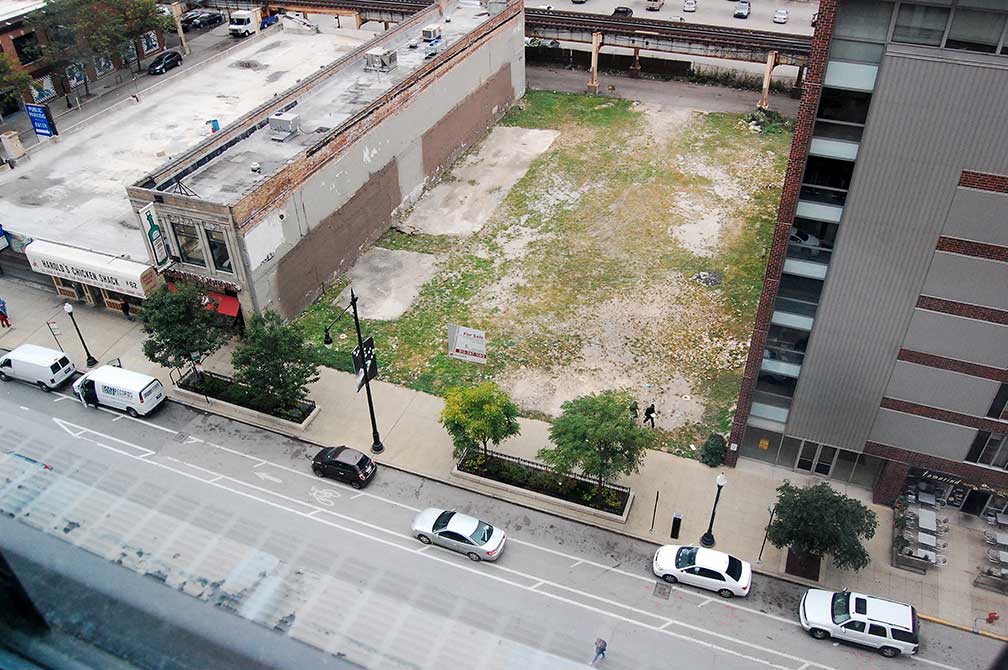 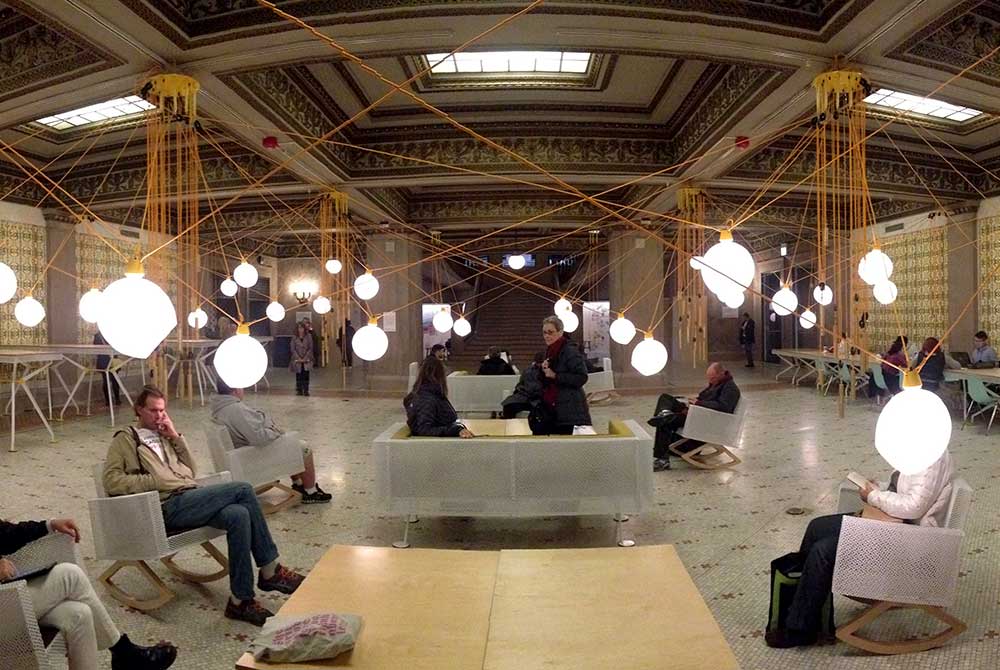 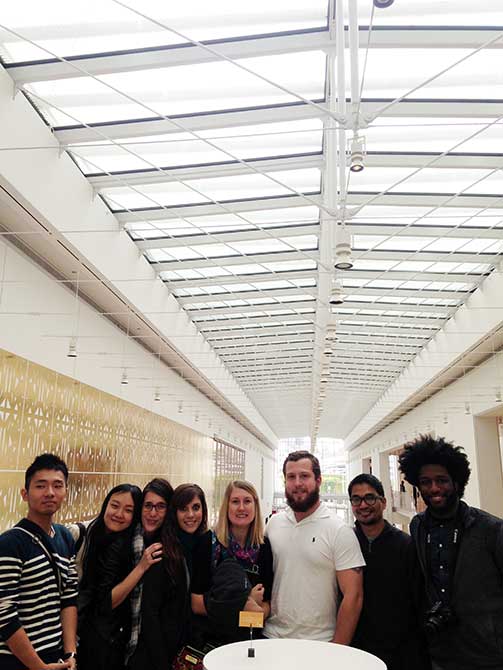 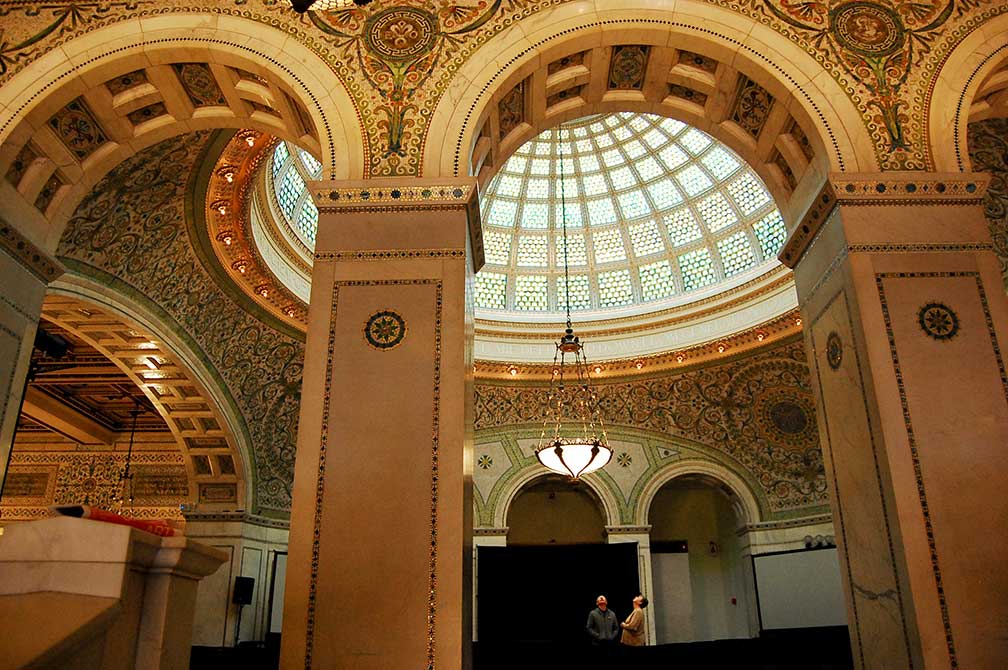 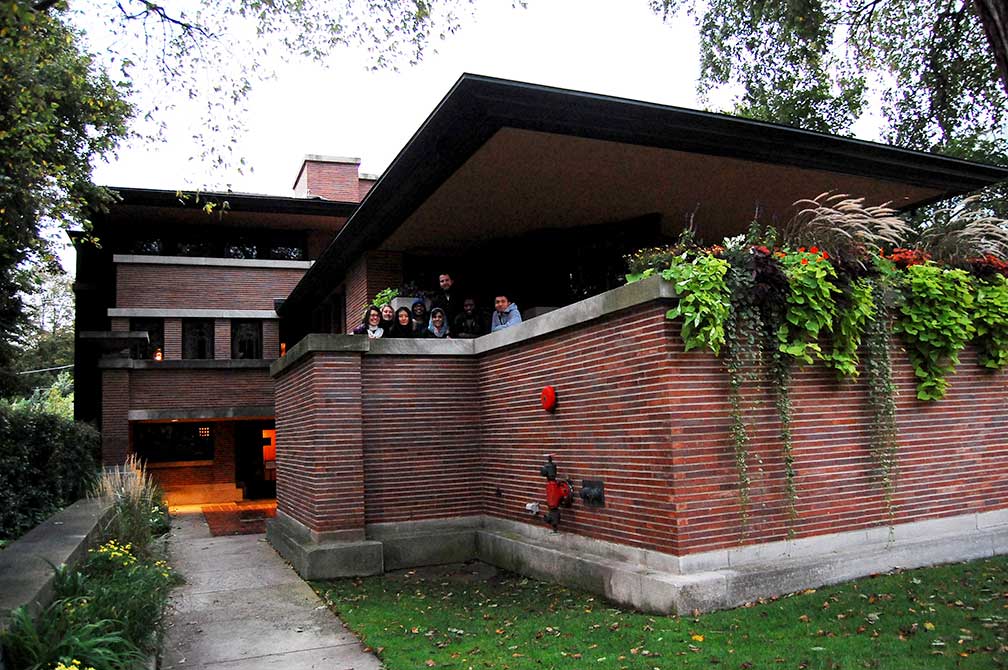 Third-year students in Associate Professor Greg Watson’s studio spent six days in Chicago, arriving at the beginning of the 2015 Chicago Architecture Biennial. During their stay the students had the opportunity to participate in events and exhibits associated with the biennial as well as several tours of the city, including an architectural boat tour along the Chicago River. They walked the length of the Loop, from Dearborn Street Station north to Marina City and the river. Along the way they saw a large collection of buildings important to Chicago’s architectural history spanning from 1860 to the present. Among these were the Rookery, the Monadnock, and the Auditorium buildings; the Federal Center; and the Modern Wing of the Chicago Art Institute. Outside the Loop they explored the significant buildings on the campuses of IIT and the University of Chicago, including buildings by Wright, Mies van der Rohe, Rem Koolhaas, and Williams and Tsien.

The students were also guests of two important architectural practices in the city, Skidmore, Owings & Merrill (SOM) and VOA Associates, who hosted tours through their offices in the landmark Railroad Exchange Building and presented several of their major projects in the U.S. and abroad. At VOA, Rebel Roberts, an LSU School of Architecture alumnus and partner in the firm, introduced the students to several recent LSU graduates—Benjamin Buehrle, MArch 2012, and Lindsay Boley, BArch 2014—who are working on a couple of the firm’s most interesting and high-profile projects, including additions to Wrigley Field and a new master plan for Wrigleyville and the Lucas Museum of Narrative Art.

The students also spent a considerable amount of time exploring the site of their studio projects, a sliver of the Chicago riverfront located between the lake and Michigan Avenue.

“This trip is the first in what we hope will be many third-year trips to Chicago,” said Watson. “It is an amazing place to explore at this point in the students’ architectural education.”

Second-year graduate students enrolled in ARCH 7003, taught by Professional in Residence William Doran, have spent the fall semester investigating the complex challenges posed by abandoned spaces in American cities. Construction and destruction: the buildings and cities we inhabit are in a constant flux between these two processes. Many spaces of physical and cultural productivity in cities have been lost to the rush of suburban development over the last century. How can these spaces be refilled, adapted, or re-used in new, hybrid ways? How can architecture preserve the culture and history of these places? What can its role be as we move forward?

The studio’s second project brought students to the Chicago for a site visit and immersive field trip in one of America’s most historic architectural gems. Students visited both large and small architectural offices and projects including Latent Design, VOA Associates, and Wheeler Kearns Architects, while also touring some of the world’s tallest and most significant buildings such as the works of Frank Ghery, Renzo Piano, Rem Koolhaas/OMA, Mies van der Rohe, Frank Lloyd Wright, Studio Gang, Daniel Burnham, SOM, and Louis Sullivan, among others.

Like most cities today, Chicago suffers from suburban expansion, vacancy, and declining economic and social conditions in its older neighborhoods. The city recently christened an eight-block portion of Wabash Avenue, just south of the Loop, as the Wabash Arts Corridor (WAC) in hopes of activating underutilized spaces through public art and engagement while unifying the area under its growing grassroots arts culture. The city’s goal is to transform the area into a “world hub for public art,” making it not only a destination, but a unified urban campus for its arts-based schools.

The students are making proposals for a new Center for Public Art and Engagement along Wabash Avenue. As an infill site, students are required to integrate public arts programming, public space, housing, and connections to both public transportation and adjacent buildings.

Visit architecture.lsu.edu for more information about the LSU School of Architecture.