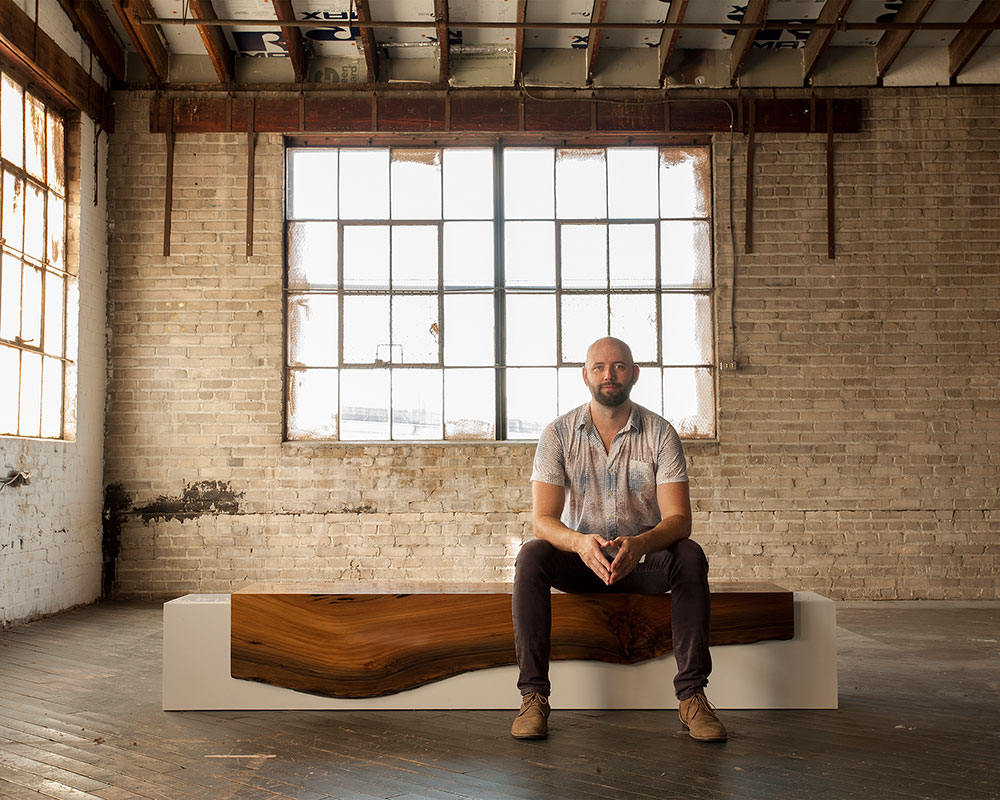 Charles Jones (BArch 2006) is a founding principal of One to One Design in New Orleans and digital fabrication director of the CNC lab at Tulane’s School of Architecture. (Photo by Dave Armentor and Thom Bennett)

Design & Technology: Expanding the Role of the Contemporary Design Professional

After graduating in 2006, LSU School of Architecture alumnus Charles Jones worked under his mentor, Jack Ford, and taught a design studio at LSU before relocating to Los Angeles to work for Frank Gehry. Before moving back to New Orleans, he spent two years in Dubai, where he helped establish a multimillion-dollar digital fabrication and research lab for American University’s College of Architecture, Art, and Design. He currently teaches advanced digital media seminars and is the digital fabrication director of the CNC lab at Tulane’s School of Architecture.

Three years ago, Jones and David Merlin, a colleague at Tulane, established One to One Design, a New Orleans–based multidisciplinary design firm that offers full-service design, constructability analysis, and design, technology, and façade consulting. One to One’s strength is in leveraging technology to enhance the design process, using innovative data management, documentation, analysis, prototyping, and visualization techniques to test ideas and discover unique design opportunities.

“Acknowledging that the landscape of the profession is changing, it is tough to start a firm that solely focuses on architecture,” Jones commented.

Teachers at heart, Jones and Merlin also help train New Orleans architectural offices on how to use Revit, and they have recently started working with Mode Lab and Autodesk to provide software previews and instructional information. Notably, they collaborated with Mode Lab to deliver software data sets and a high-impact video preview for Formit, Autodesk’s answer to SketchUp.

“Versatility is big for us,” added Jones. “We stay in touch with technology’s influence on the profession through academia, and our identity is less formally driven. Every project presents a new opportunity. What we architects learn best in school is how to solve problems; we enjoy dissecting problems and finding rich ways to provide design solutions.” 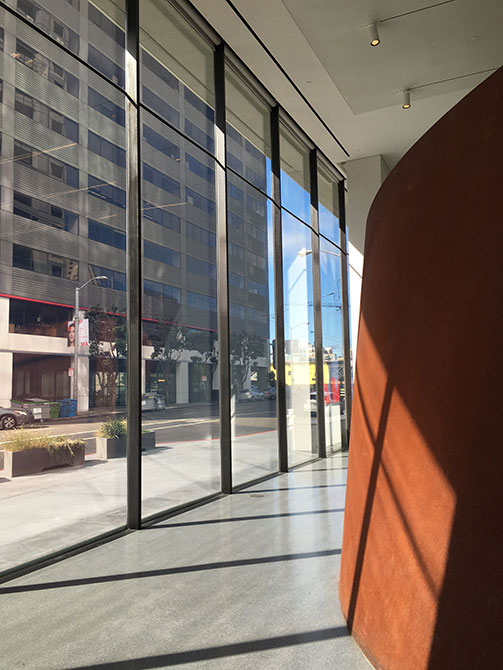 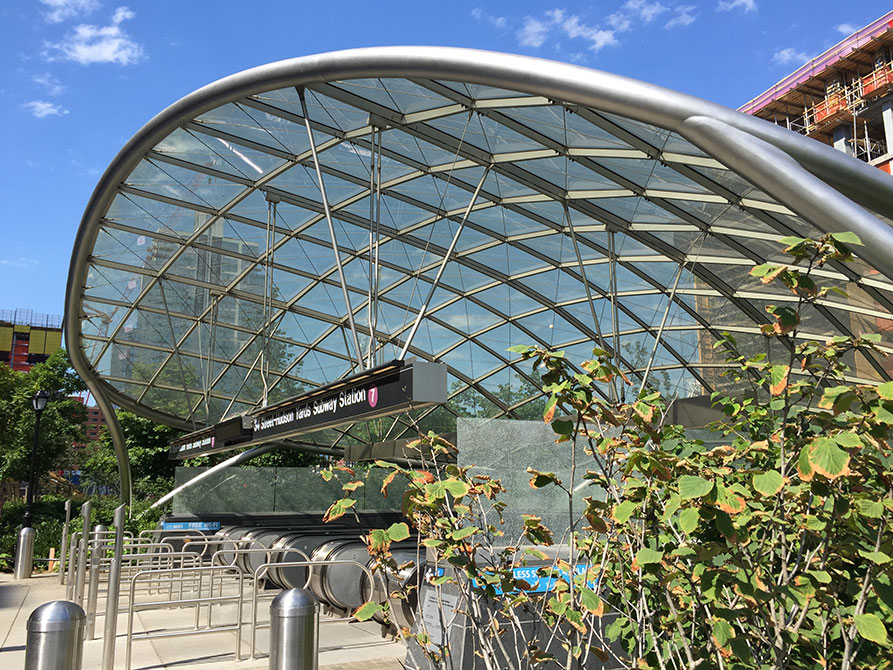 One to One’s consulting work includes projects in conjunction with Enclos and Optimum Designs, including the design and detailing of a street gallery façade for San Francisco’s Museum of Modern Art Expansion, designed by Snøhetta. The firm was contracted to help detail and rationalize the glass paneling on two new subway canopies in New York and an entrance canopy for Capital One’s future headquarters in Virginia.

Designed by Toshiko Mori, the MTA canopies are an integral part of the Hudson Yard Development project. One of the two canopies is complete, and the second is in its final phase of construction. One to One is currently assisting in the design phase by performing various types of analysis on the Capital One Canopy; estimated completion is late 2016.

“These projects—more directly related to research—keep us fresh and relevant, allowing us to test design tools and their relationship to documentation and analysis,” said Jones. “Competitions are another great platform to test design ideas. As teachers, we have the opportunity to hire former students over the summer to engage in more research-based projects, typically architectural competitions.”

One competition, the Bee Breeders Cannabis Bank International Architecture Competition, proved to be rather timely. In June 2015, former Louisiana Governor Bobby Jindal signed a law legalizing the use of medical marijuana in the state. In May 2016, a bill was established to allow one grow site and 10 legal dispensaries in the state, offering LSU and Southern University the first right of refusal to be licensed as the production facility for medical marijuana. The LSU AgCenter is now tasked with developing a plan of operation that addresses the financing, facilities, equipment, personnel, and security of the medical marijuana initiative. Visit lsuagcenter.com for more information about the AgCenter’s medical marijuana production initiative. 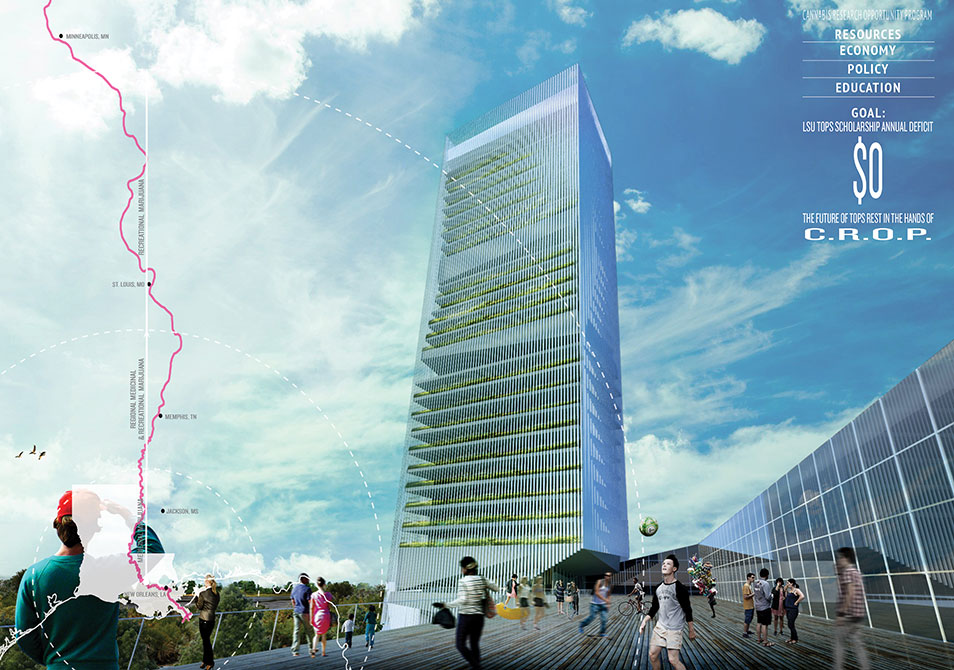 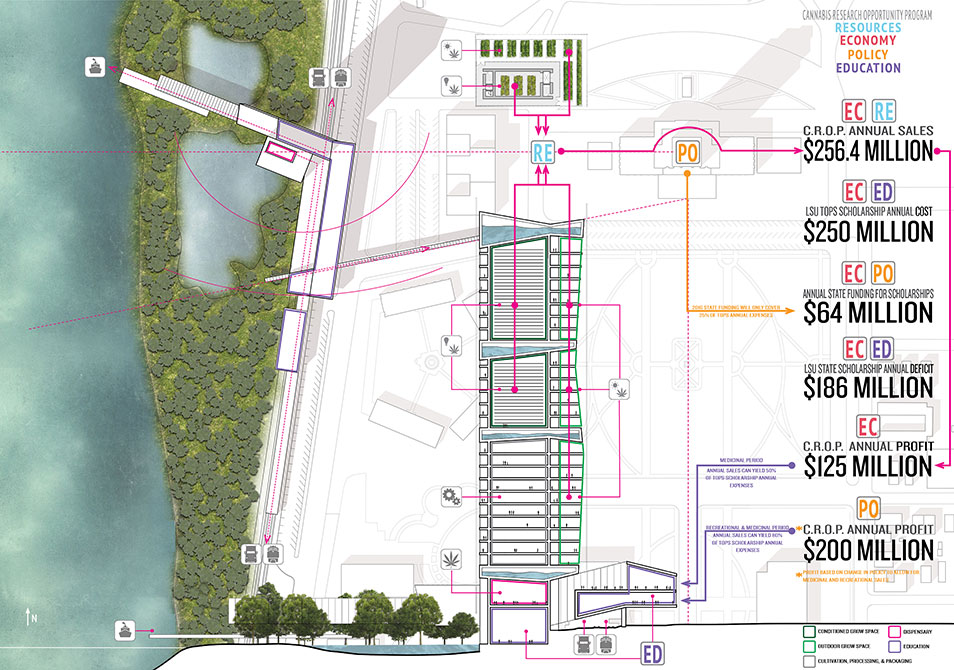 The bill offering LSU and Southern University the first right of refusal was passed just as One to One began their initial research for the Cannabis Bank competition. Architects were asked to define a contemporary architecture of cannabis. As stated in the competition brief, “In much of the world, Cannabis is controversial, challenging, considered in many places taboo, yet is relevant as a concern of legality, medicine, health, ethics, and economy.”

One to One’s project, titled CROP (Cannabis Research Opportunity Program), took the competition requirements one step further, proposing the full package: a state grow site and distribution center to be operated by the LSU AgCenter and a narrative focused on local resources, the economic crisis and its effect on TOPS, policy, and education. Their project envisioned a vertical farming, hydroponic tower, a dispensary for the public, and research and classroom spaces, imagining the grow tower as a research facility for the AgCenter that would offer hands-on experience in hydroponic growing systems. Jones said they positioned the grow tower at a site on the Mississippi River downtown, directly opposite of the State Capitol Building, “taking an aggressive position by commenting on existing policy.”

One to One’s proposal placed in the competition, earning honorable mention. “Once LSU said yes, we felt our narrative had a lot of potential,” Jones commented. “Hey, we were a little bit ahead of the curve in figuring out how this could work. It would be amazing if our project went from honorable mention to real-life commission.”

As Jones approaches his tenth college reunion, he said he often reflects on his education at LSU. “I have a tremendous amount of respect for my education. Choosing to major in architecture was definitely a leap of faith, and the great faculty and mentors at LSU showed me that you don’t find architecture; it finds you. It is more a way of life than an occupation.”

Visit 1to1-design.com for more information about Jones and One to One Design.