Skip to content
COLLEGE OF ART & DESIGN Home / Academic Programs Abroad / From One Boot to Another: LSU Students Spend a Semester in Rome 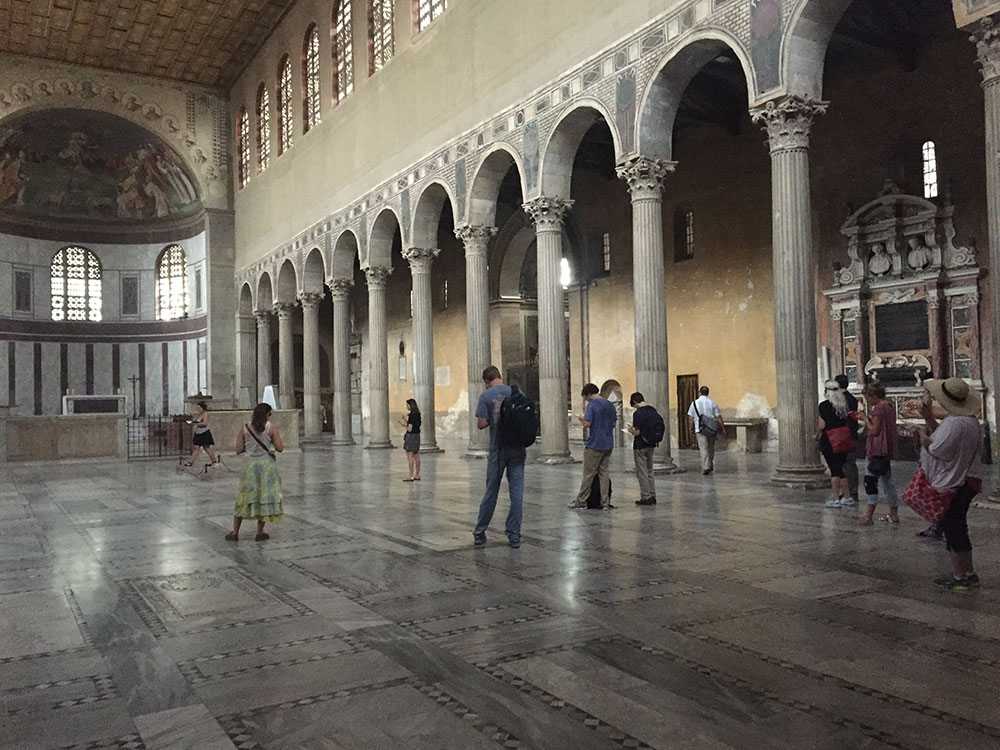 Students spend the first few days in Rome in shock and awe, like when they visited the Basilica of St. Sabina.

The results of a comprehensive survey exploring the long-term impact of studying abroad conducted by the Institute for the International Education of Students (iesabroad.org) shows that “study abroad positively and unequivocally influences the career path, world-view, and self-confidence of students.” Benefits of studying abroad include increased maturity, tolerance, and intercultural development. Students gain a better understanding of their own cultural values and biases, and the experience has a lasting impact on their world-view. Studying abroad also leads to long-lasting friendships with other students, and a majority of those surveyed responded that they continue to seek a greater diversity of friends and experiences. Students benefit no matter how much time they spend abroad, but “the longer students study abroad, the more significant the academic and cultural development and personal growth benefits.”

“We have domestic and international exchanges throughout the world to different partner universities that students can go to during the fall and/or spring, but the Rome program is the first time we took the LSU faculty-led model that has been so successful in the summer and applied it to an entire fall semester,” said Jill Clemmons, assistant director of APA at LSU.

The program is offered during the fall semester and is a 17-week, 15-credit-hour, design curriculum taught by LSU and University of Arkansas Rome Center faculty. Designed to integrate within the curriculum in the School of Architecture, the coursework enables students to engage in the built environment of Rome while testing observations through design work. Field studies, travel, and housing are coordinated through the administrative staff at the University of Arkansas Rome Center at Palazzo Taverna, a 13th-century palace located between the Vatican and Piazza Navona, home to private residential apartments, banqueting halls, diplomatic residences, and art studios. 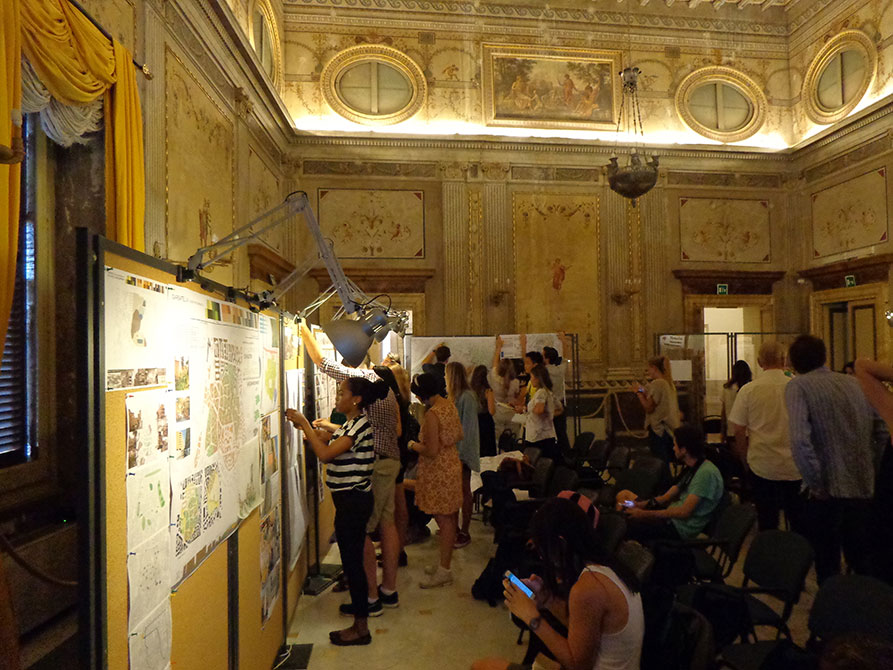 Studio spaces are located in the Piazza Taverna. Here, students present their work to faculty and guest critics during mid-term reviews.

The program is open to other design disciplines in the college besides architecture; in fact, three interior design students participated in the first semester-long program in fall 2015. Directed by A. Hays Town Professor Ursula Emery McClure, LSU School of Architecture faculty members rotate teaching in Rome each fall.

“One of the things I loved about teaching the program,” said Holton, “it wasn’t a group of students who already knew each other. We had fourth- and fifth-year undergraduate architecture students in studios with fourth-year interior design undergrads and architecture grad students. Students from a total of four universities were studying at the Rome Center. The students—and their work—benefitted from these different influences and perspectives.”

“Everyone knew how to do something differently,” recounted Tina Naraghi-Pour, a Baton Rouge native with dual U.S./Iranian citizenship who received her Bachelor of Architecture from LSU in May 2016. “We got different perspectives from people above and below us in the program, and seeing more diverse approaches was refreshing.”

LSU students are required to take the architectural design concentration studio and a seminar course on vernacular architecture and material culture, combined worth 12 credit hours, and they can choose an approved, three-credit-hour elective. Most take Architecture in the City, a course co-taught by LSU and University of Arkansas Rome Center faculty.

“I think I did the most—and the best—work I’ve ever done during the Rome program,” Tina avowed. “Inspiration came easily, and if it didn’t, we could take a break and walk around Rome to get inspired again.”

A member of a New Orleans family of Italian descent, Cody Maffei attended the Rome program in the fall semester of his fourth-year in the Bachelor of Architecture program. “We had to learn to work within the assigned studio hours. It completely changed the way I work; I get up a lot earlier, even now that I’m back. It was nice to have to leave the studio—more time to enjoy aperitivos,” he jested.

For their fall 2015 studio project, students investigated the juxtaposition of the old and the new to develop a program for the 2024 Olympic diving event set to take place in Rome. Inspired by the location of the 1960 Summer Olympics in Rome, the project site was the Hippodrome of Domitian and the immediate surrounding areas on Palatine Hill. The project parameters covered an approximate space of 30,000 square feet for the entire Olympic diving venue, including the pool and diving platforms, seating for 600 spectators, concessions, ticketing, restrooms, locker rooms, and the myriad of other details that a project of this scale entails, such as providing separate points of entry for each user group—athletes, spectators, and journalists. The students had to explore temporary, additive building processes since excavation and permanent structures would be prohibited at the location, an active archaeological site and one of the most ancient and historic parts of Rome. The design project engaged adaptive reuse and new construction, interior and exterior environmental conditions, and preservation and demolition procedures. 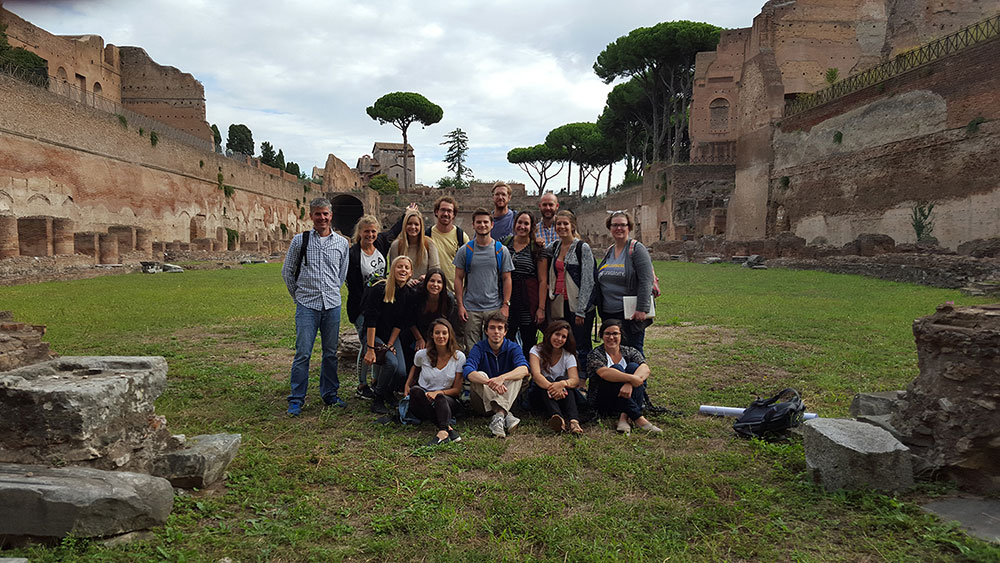 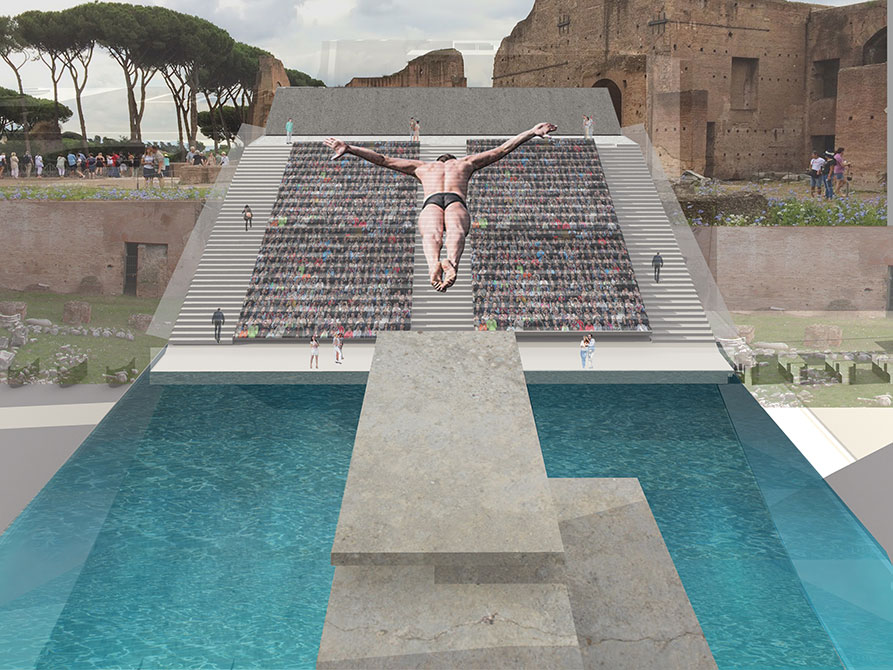 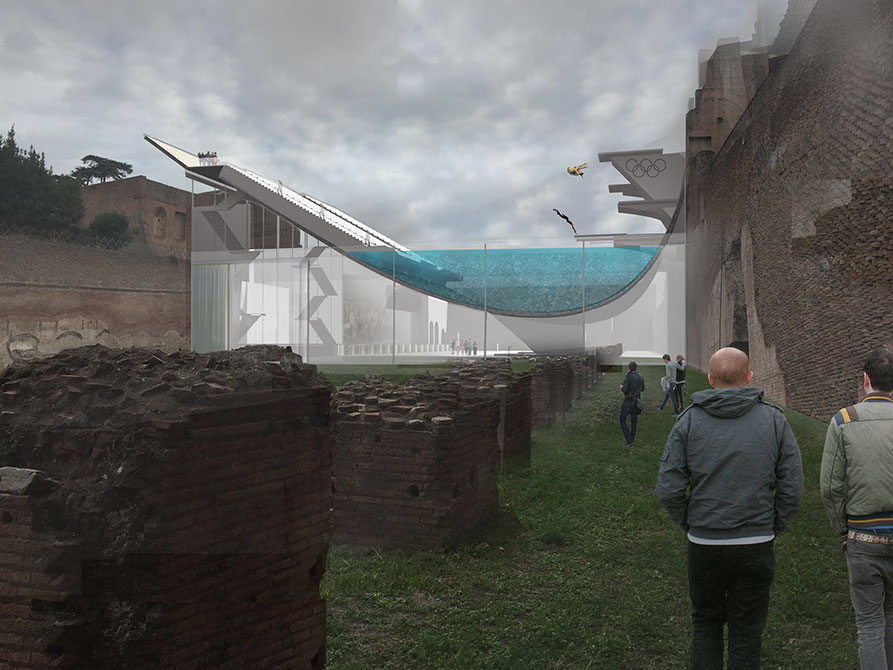 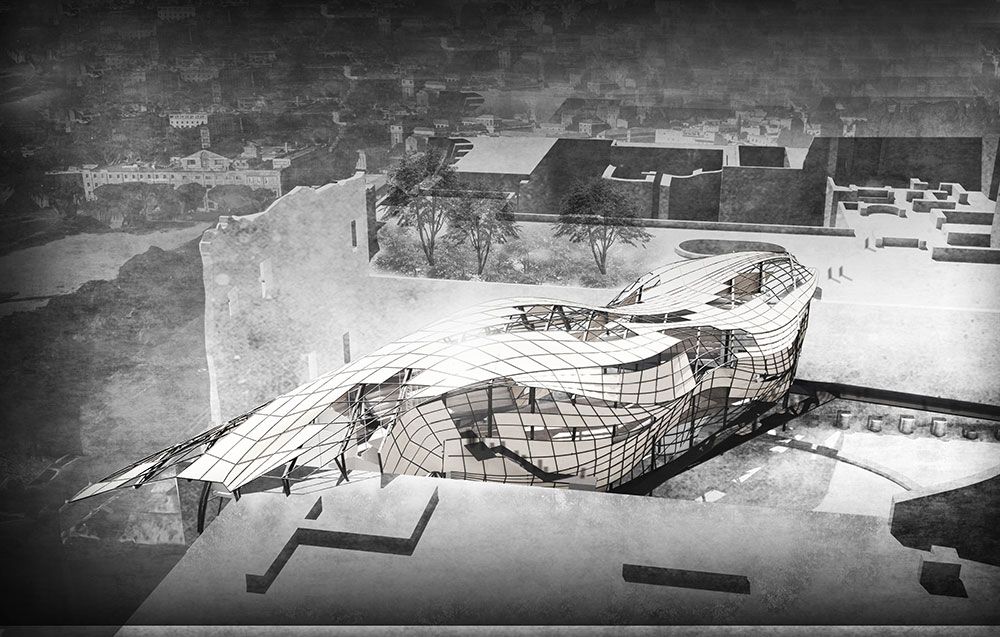 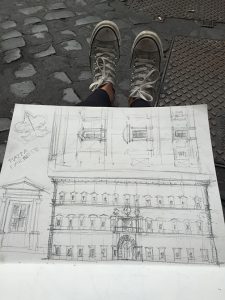 Sara Loquist, a non-traditional graduate assistant with a background in business who received her Master of Architecture from LSU in May 2016, also found the project challenging. “Because we couldn’t excavate, at first we felt limited in what we could do. It was more like a puzzle; the program had to fit inside the spaces that were already there, which required a whole different mindset. Getting different perspectives from the interior design students was helpful—thinking about materiality versus structure. We were able to build off each other’s ideas and methods.”

The vernacular architecture and material culture seminar delves into the origins and development of the architecture/tectonic culture of the Roman Empire. The seminar, titled the Rome Tectonic, traces the influences of the empire’s material innovations through the lens of concrete. Students conduct their own concrete experiments, developing and pouring their own concrete mixes based on unique questions and hypotheses. In fall 2015, students made more than 100 12-by-12-inch concrete casts. Among other concepts, students attempted to create transparent, glow-in-the dark, magnetic, squishy, and thin-but-strong recipes for concrete.

“We got to be Romans and make our own concrete,” Cody remarked. The experiment led to a few sobering moments in his search to find an unusual material in a non-English speaking country. He recalled having a “pretty hilarious” experience trying to find powdered iron at the “Roman equivalent of Home Depot,” a small, mom-and-pop hardware store. “I eventually had to order it on the Internet,” he said, laughing. 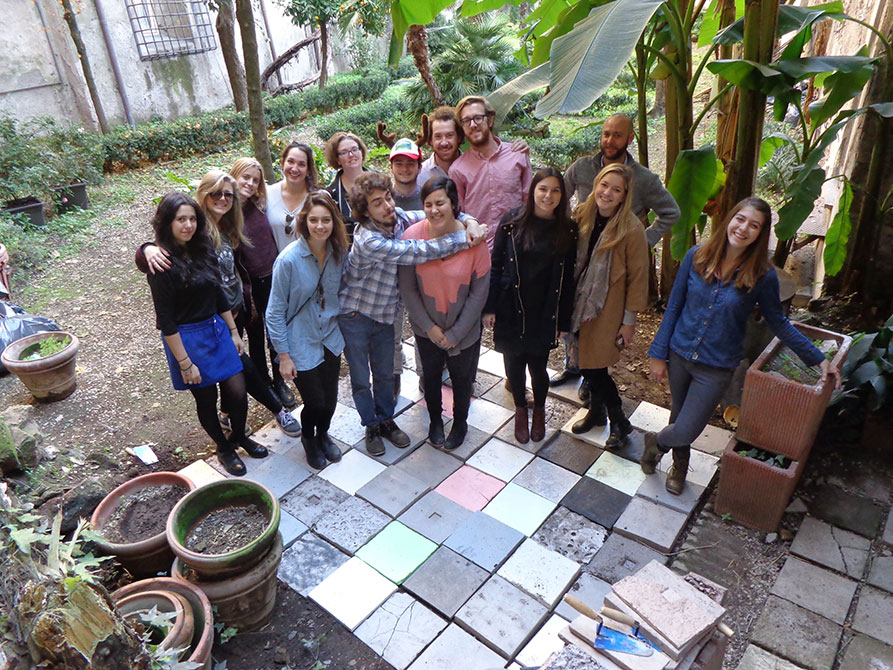 For the Rome tectonic seminar, the students developed and poured their own experimental concrete mixes, making more than 100 concrete casts.

“The support of the Rome Center is crucial to our success,” Holton commented. “Their staff offers 24/7 assistance, helps us find materials, and arranges field trips and excursions.”

Holton arranged several class excursions through the Rome Center when he taught in fall 2015, and the Architecture in the City course included weekly excursions to nearby tourist attractions and cultural sites. As part of the tectonics class, Holton arranged a field trip to the Tasullo Concrete Research Facility in Bergamo, Italy. The students visited the lab, toured the concrete mine, and then hiked over the Dolomites, the unique geological formations from which the concrete is mined. 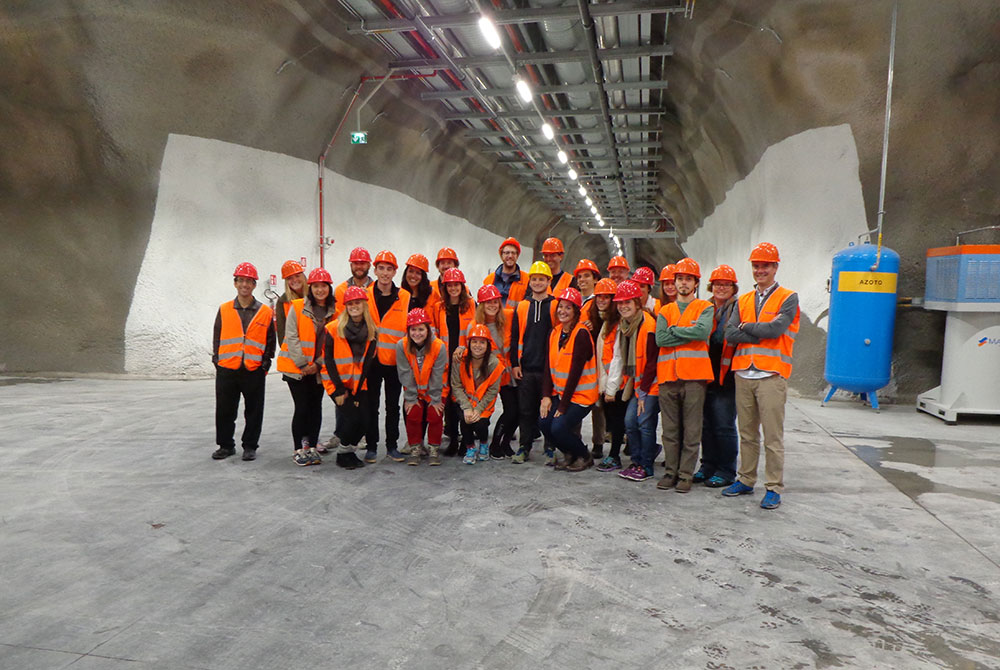 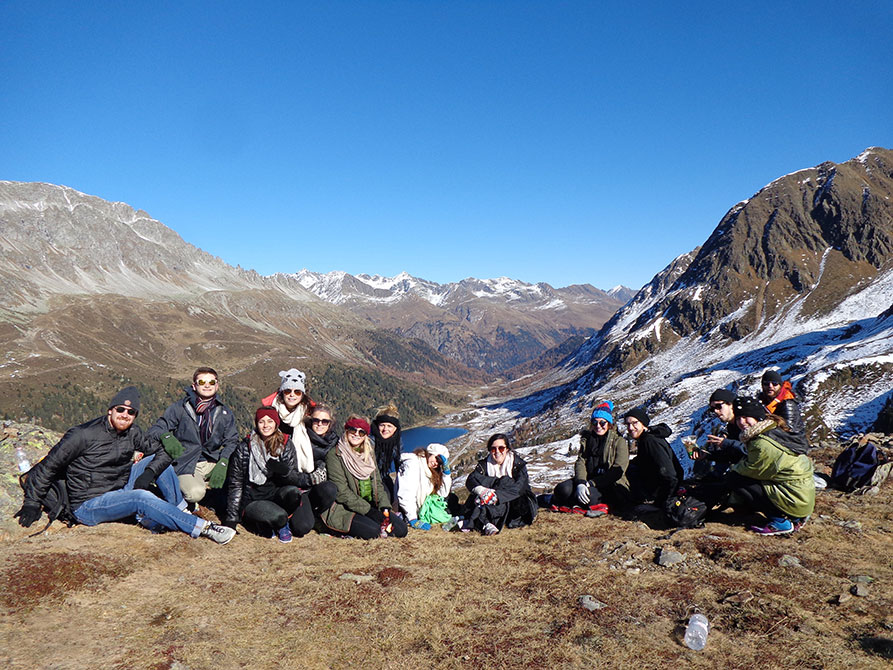 “We worked hard and we played hard,” said Kelsey. “Every weekend, we went on a different excursion. Everything the school provided was 100 percent for our knowledge and fun.” The trip to the Dolomites was one of her favorite excursions. “We had access to all these places we normally wouldn’t have gone or been allowed to visit on our own,” she explained. “I will never be able to recreate this experience, which makes it all the more special.

Students have multiple opportunities to travel throughout Europe during their semester abroad, and most take advantage of the Thanksgiving break to travel further afield. In fall 2015, collectively, the students visited a total of 31 cities, including Venice, Barcelona, Lisbon, London, Dublin, Budapest, and Munich.

“It was nice to have access to such a casual travel experience,” said Cody. “Everything was so close; you could just hop on a train and be in Bilbao or Verona.”

Holton made sure the students saw more than just the touristy areas of Italy during their time there. In a two-week workshop at the beginning of the semester, students from all four universities participating in the program—LSU, University of Arkansas, Philadelphia University, and Rensselaer Polytechnic Institute—were divided into groups and assigned a neighborhood outside the city center to research and present their findings.

Cody’s group was assigned the Garbatella neighborhood, a web of curved sidewalks, angular plazas, and maze-like courtyards designed in the Fascist era of Mussolini and forced to convert to Communist design principles in the 1970s. “Garbatella was a good example of idyllic Italian suburbia,” observed Cody. “It was interesting exploring a place in Rome I wouldn’t have normally visited.”

The semester-long program in Rome is a life-changing experience for all involved and a great opportunity for faculty and student enhancement.

“It was great working with the other faculty members there,” reported Holton, who had the opportunity to be a juror for Europan, a biennial competition for young architects to design innovative housing schemes for sites across Europe. “Being one of the jurors was a fascinating experience.” Holton also connected with former colleagues from his time working with Bernard Tschumi, two of whom participated as jurors for the LSU students’ final reviews.

Kelsey said her interior design senior capstone project was inspired by her time studying abroad. Her project was based on the preservation of an abandoned industrialized structure in Rome, the former Pontifical Arsenal. She proposed converting the structure into a contemporary workplace, gallery, and recreational outdoor space. “The main goal was to preserve the former Pontifical Arsenal, reconnect the surrounding neighborhood suffering from neglect, and provide for the future,” she explained. Her conceptual ideas were based on the Tiber River and Italian architect, Carlos Scarpa. 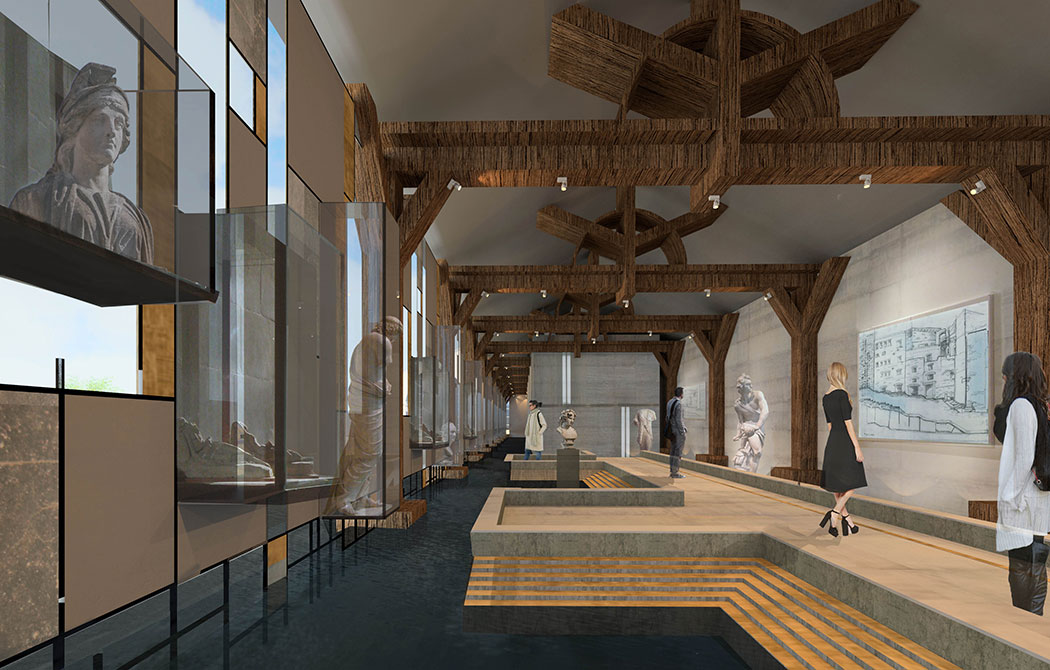 “Our bubble has expanded; we came away with a whole new family,” added Tina, who worked the entire summer to pay for the program. “It was money well spent; I will never regret the money I spent there.”

Cody concluded, “We made friends with people we would have never met before Rome. We lived within walking distance of the Vatican—we actually strolled through it on our way to studio every day. Walking on roads that are so old, that weren’t designed for cars, seeing materials in use that aren’t as prevalent in the United States, living in a place with so many monuments and masterpieces casually placed next to each other . . . experiencing Rome is like seeing the greatest hits of art and architecture. What a great way to live your life for a semester!”

Visit artanddesignrome.lsu.edu to follow the progress of current students studying abroad in Rome and learn more about the program, and see more photos on LSU School of Architecture’s Facebook page in the 2016 Rome Program photo album.