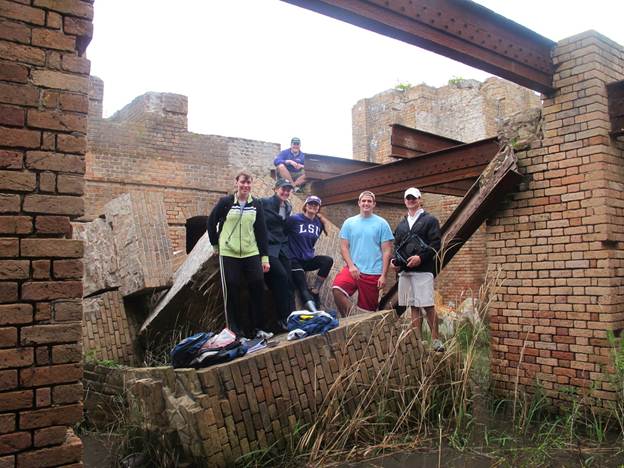 Architecture and photography students at work on Fort Proctor

Associate Professor of Architecture Ursula Emery McClure and several of her students were recently awarded the 2012 Charles E. Peterson Prize for their entry “Fort Proctor.” The School of Architecture will receive $2,750 as the result of their efforts, which garnered a tie for first place.

Professor Emery McClure worked with a small group of dedicated students throughout the fall 2011 and spring 2012 semesters to complete the drawings of the Historic Fort Proctor site (see below for details on the fort). The two groups of students involved with winning the Peterson Prize are: (spring 2012) Cody Blanchard, Annette Couvillon, Lindsay Boley, Christopher Peoples, Sarah Kolac, Taylor Alphonso, and (fall 2011) Taylor Alphonso, Ben Buehrle, Audrey Cropp, and Claire Hu. The spring 2012 students will travel to Washington D.C. this fall with Professor Emery McClure to receive the prize.

A student competition of measured drawings, the Peterson Prize is presented jointly by the Historic American Buildings Survey (HABS) of the National Park Service, the Athenaeum of Philadelphia, and the American Institute of Architects. The annual competition, currently in its 29th year, honors Charles E. Peterson, FAIA (1906-2004), founder of the HABS program, and is intended to heighten awareness about historic buildings in the United States and to augment the HABS collection of measured drawings at the Library of Congress.

In addition to generating more than 5,300 sheets of drawings for the collection to date, the competition presents awards totaling $7,500 to the winning student teams. Drawings must be of a building that has not been recorded by HABS through measured drawings, or be an addendum to existing set of HABS drawings that makes a substantial contribution to the understanding of the significance of the building.

The School has a long history of involvement with the Peterson Prize, winning eight prizes when submissions were made from 1989 through 2002 through the efforts of retired professor, William Brockway.

“This is a tremendous accomplishment for our School, our University and our State,” says Director of the School of Architecture Jori Erdman. “It is also a great contribution to preserving the rich heritage of Louisiana. In times of tremendous budget cuts to higher education, this prize shows that our faculty and students continue to be dedicated to the mission of the University, the good of the state, and can compete on a national stage.”

For more information on the prize, visit http://www.cr.nps.gov/hdp/competitions/Peterson_winners.htm#1984. 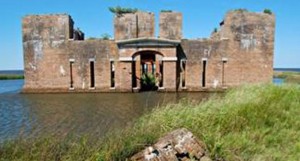 Professor Emery McClure received a grant from the National Park Service (Department of the Interior, through the Louisiana State Department of Culture, Recreation and Tourism, Office of Cultural Development, Division of Historic Preservation Fund) last year in order to complete the work on Fort Proctor. In a separate but related project, she also worked with an interdisciplinary team on an investigation of the fort for the LSU Coastal Sustainability Studio. She received more than $75,000 in grants to work on these projects with her students.

Fort Proctor, located on the shore of Lake Borgne, was built in the 1850s and intended to protect water routes towards New Orleans. The fort, however, became hurricane damaged and was deemed obsolete after post-Civil War improvements in artillery. The fort was listed on the National Register of Historic Places in 1978 and is now completely surrounded by water.

If the present predictions regarding coastal land loss and global climate change hold true, Fort Proctor is at risk of being further damaged or completely destroyed. This documentation creates a permanent archive of the structure and contributes to the legacy and record of Louisiana’s coastal built environment and the United States’ system of coastal defense fortifications.