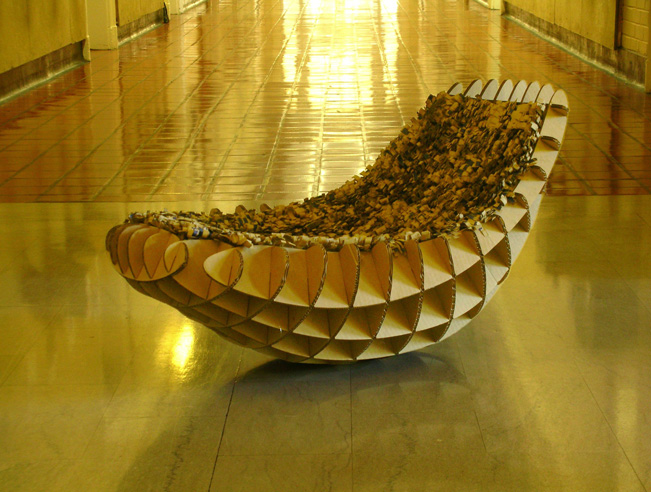 Two fourth-year students in the LSU School of Architecture are finalists in a unique and prestigious national competition known as the Chair Affair Design Competition. A rocking chair by Sarah Clement of Luling, LA and Drew Wallace of Baton Rouge was chosen from among more than 171 entries as one of just six finalists in the competition, which is sponsored by the American Institute of Architects Students (AIAS) and the International Corrugated Packaging Foundation. (ICPF)

The competition is challenging and unusual in that it requires students to use but two materials to build their chairs: cardboard and glue. Clement and Wallace’s “A Chair Made of Cardboard,” was constructed from recycled cardboard using a digital fabrication technology. The students designed parts of their chair in a three-dimensional computer program then cut the components out with a laser printer.

“It’s really interesting because in many competitions students are only required to design something — not build it – so they be a little vague,” says Associate Architecture Professor David Baird, who advised the students. “This one they actually had to put it together and it had to be able to support someone’s weight.”

The fact that the students chose recycled cardboard was also impressive because of the School’s emphasis on sustainability. Not only is the chair sustainable, but it’s strong. Wallace estimates it can bear up to 200 pounds.

“It’s a great chair and we’ve really had a lot of fun with it, Wallace says.

The chair is currently on its way to San Francisco, where it will be judged and placed on display with the other finalists at the professional AIA conference in early May. First and second-place winner will be chosen from the six and will be presented with awards later this year in Las Vegas.

But even if the LSU students don’t win the competition, School administrators say finishing in the Top Six is a tremendous accomplishment. “We’ve very proud of them,” Baird says. “This the first time we’ve entered this and they really took the initiative to make it happen and they came up with a truly impressive and creative design that works.”