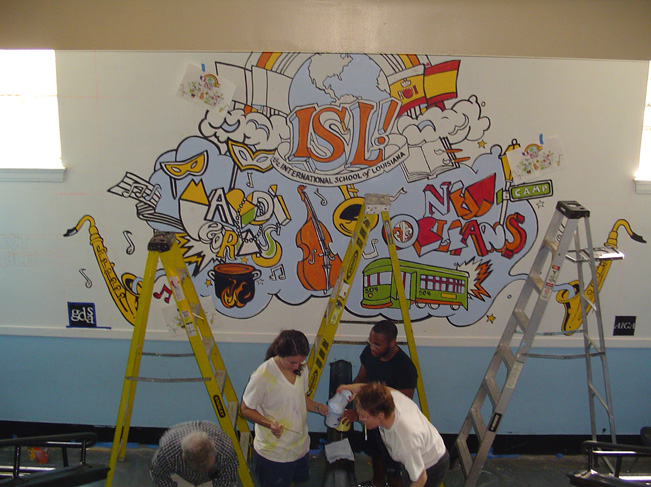 When visitors walk in the main entrance of the International School of Louisiana – a progressive, language-immersion school in New Orleans – they’re greeted by a giant mural with colorful iconic images of the Crescent City. It’s an eye-catching, 10-by-15-foot creation that was recently completed by students from the LSU School of Art.

The project is the latest example of service learning that LSU art and design students have experienced, and was a collaborative effort between the School of Art’s Graphic Design Student Association (GDSA) and the student chapter of the American Institute for Graphic Arts (AIGA), which is the professional association for design.

The project began last year when art student Allison Dugas received a $500 grant from the New Orleans AIGA chapter to create and execute in a public space a work of art that spoke favorably about New Orleans as a good place to live. Before the project could get underway, Dugas graduated and moved to New York. That’s when fourth-year art student Alonzo Felix of Baton Rouge picked up the project and started calling hospitals and schools in New Orleans that might be interested in such an artistic creation. He found a willing taker in the International School, which had just relocated to a new space on Camp Street in the lower Garden District.

Felix designed the mural and calls it a type-driven collage with images that are iconic of New Orleans and the school. It includes bright saxophones and musical notes, a street car, Spanish and French flags, foreign phrases and an oversized ISL logo. His design was projected on to the wall then traced by the dozen or so students who worked on the project in day-long increments over the course of several weeks. They then painted the image using latex paint.

Students involved in the project say it was a very rewarding experience. Not only did they get out of the classroom and into a real-world setting, but they were able to help a struggling school still recovering from the devastation of Katrina.

“It was a lot of fun,” says Alice Wack, who worked on the project. “We also enjoyed occasional visits from the school kids at ISL, who would run around the stairwell to take a peek at our progress.” Art school faculty members Gerald Bower and Lynne Baggett advised the students on the project.