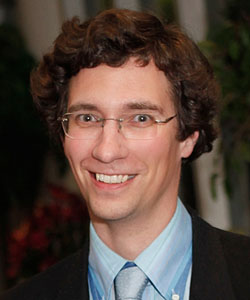 Darius Spieth, associate professor of art history in the LSU School of Art and an expert in the field of international art markets and 18th- and 19th-century European art, has been named Mellon Visiting Professor for 2011 at the California Institute of Technology, or Caltech, in Pasadena.

During his six months at Caltech, Spieth will teach courses in the history of art markets and in 18th-century European art. He will also continue research for his latest book, which explores the development of art markets and art auctions in 19th-century Paris. Additionally, he will help prepare and co-host the 2011 Mellon Conference, the theme of which will be “The Temper of Evidence: From Antiquity through the 18th Century,” to be held at Caltech in May.

“We are delighted to have Darius Spieth join us as visiting professor for the third and final year of our Mellon project, ‘The Temper of Evidence,’” said Jed Buchwald, a historian at Caltech who is sponsoring Spieth’s visit. “His knowledge of French history and particular expertise in the complex issues surrounding the development of the antiquities and arts markets will provide an invaluable addition to our investigations.”

During his seven years at LSU, Spieth has distinguished himself as one of the university’s most prolific faculty members. This year alone, he received the LSU Alumni Association Faculty Excellence Award and the TAF Freshman Year Teaching Award. In 2008 and 2009, the university recognized him as one of its Rainmakers, one of the top 100 faculty in research productivity. In 2009, Spieth also received a summer research grant from the National Endowment for the Humanities.

Spieth joined the faculty of LSU in 2003, after receiving his doctorate from the University of Illinois at Urbana-Champagne and a MBA in international finance from the International University of Japan. He has written dozens of articles, as well as the 2007 book on French Egyptomania, “Napoleon’s Sorcerers: The Sophisians,” published by University of Delaware Press. He will return to LSU in the fall of 2011 and resume teaching his regular courses.

“We are delighted to be working with a distinguished scholar who has such a range of international experience,” said historian John Brewer, who is also sponsoring Spieth at Caltech. “He brings to Caltech such an unusual combination of skills, all of which will enhance the project on the nature of evidence.”