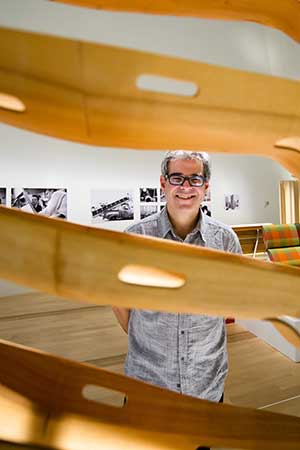 Eames Demetrios will lecture at the LSU College of Art & Design as part of the Paula G. Manship Endowed Lecture Series at 5 p.m. on Wednesday, September 30, in the LSU Design Building Auditorium (room 103).

Among his many achievements in this capacity is the multimedia component of the Library of Congress/Vitra Design Museum Eames exhibition, the thinking curriculum for Scale is the New Geography, The Essential Eames Exhibition at the Art and Science Museum in Singapore,  the re-introduction of many Eames furniture pieces, and the release and video restoration of the Eames films.  In addition, he works closely with Vitra and Herman Miller to be sure the Eames furniture is always made authentically and was instrumental in the founding of the Eames Foundation that preserves the Eames House (he is Chairman of the Board).  He has also written several books about Charles and Ray Eames—Including An Eames Primer, intended as a thematic biography of their life, work, process and philosophy, now widely used by schools and available in three languages.

Most recently he has collaborated with AMMO books on Beautiful Details, created a fourth film that celebrates the Eames Elephant through animation and in the winter of 2014 produced the exhibition Ray Eames in the Spotlight at Art Center College of Design.

In addition, Demetrios is an artist and filmmaker. His current large-scale project, Kcymaerxthaere, is a multi-pronged and ongoing work of 3 dimensional fiction and has been underway for 11 years.  The project can be found in stories set in bronze markers and historic sites–like a novel where every page is in a different city.  His recent exhibitions include the Man& Eve Gallery in London, UK, and served as artist in residence at the Halsey Institute of Art in Charleston, SC.  In 2014, more Kcymaerxthaerean installations are scheduled for Indonesia, Columbia, and Cyprus including a major installation in New Harmony, Indiana.  He has published four books (Wartime California, Discover Kymaerica Travel Guide, Discover Leddl & Parts of know Estrelliia, Please Don’t Connect the Dots) centered on this project.

Demetrios has made over 60 films and videos of various lengths over the past 25 years or so.  Themes and topics include a fiction feature on homelessness, a documentary on Sambo Mockbee’s Rural Studio, and the Malibu/Old Topanga Fire.  His most recent purely film projects include the Powers of Ten of Wine, Ping Pong–capturing the design process of Frank Gehry, and Carnival in Chiapas, about the modern Maya of southern Mexico.  Many of these films can be viewed at Dasfilmfest on eamesdemetrios.com

Demetrios also gives talks all over the US and internationally (43 countries spanning 6 continents) on many subjects, ranging from design to science, scale to his own work.  He was a TED Conference Main Stage speaker in 2007.

No matter which hat, he brings out the adventurous side of his creative partners, institutions such as the Sinapore Museum of Art and Science, Portugal’s Gulbenkian Foundation, and businesses like Universal Studios and Interface, Inc (a billion dollar flooring company run on sustainable principles). Other important clients include Emeco, Coca-Cola and the California Academy of Sciences.

He resides in Los Angeles with his wife and two sons. Read more at eamesdemetrios.com.