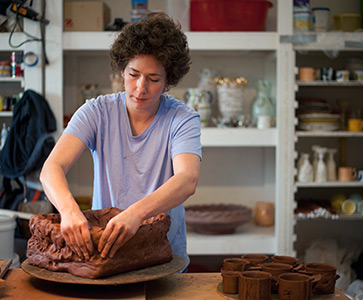 Joanna Powell, sculptor and painter, will present a School of Art lecture titled “Impossible Beauty”, in conjunction with the Ceramic Artists Student Association, at the LSU College of Art & Design at 5 p.m. on Wednesday, February 21, 2018, in the LSU Design Building Auditorium (room 103).

Joanna Powell is a sculptor and painter born and raised in Dallas, Texas. Through installation she contextualizes common objects with personal meaning. Her work is the result of thinking about longing, privacy, history and sexuality. She draws inspiration from Etruscan and pre-Columbian pottery, Sèvres porcelain, folk art and painting. Her forms are excavated out of blocks of clay and pinched.

In 2012, she received her MFA in ceramics from The University of Colorado at Boulder. In 2008, she received her BFA from The University of North Texas in Denton. Powell has exhibited her work throughout the United States. In 2011, she was a LEAP finalist at The Center for Contemporary Craft. Powell was a finalist in the 2014 Zanesville Prize for Contemporary Ceramics and received Honorable Mention. From 2013-2015 she was a long-term fellow at The Archie Bray Foundation. Recently, she was named a 2015 NCECA Emerging Artist. From 2015-2016 Powell was an Artist-In-Residence at Kansas State University and taught ceramics. During November of 2016, She participated in an artist residency at Denison University in Granville, Ohio. Currently she lives in Helena, Montana and is a full time studio artist and travelling lecturer.